Accessibility links
Once Naked For Nirvana, Now A Teen Spirit Before he was old enough to say "embarrassing," millions of people saw Spencer Elden in his birthday suit on the cover of Nevermind. As a teenager, he tried to make sense of his very public image.

Listen
Once Naked For Nirvana, Now A Teen Spirit

Spencer Elden on the cover of Nirvana's Nevermind.

Imagine if millions of people had seen you naked before you were old enough to say "embarrassing." That's the story of Spencer Elden, whom you may know as the little baby floating toward a dollar bill on the cover of Nirvana's 1991 album, Nevermind.

"Quite a few people in the world have seen my penis," he says from his home in Los Angeles. "So that's kinda cool. I'm just a normal kid living it up and doing the best I can while I'm here."

Nevermind is often credited with changing the face of rock. Elden's naked participation in this important moment in music history was rather accidental; Kirk Weddle, the photographer working on the cover, was simply a friend of Spencer's dad, Rick.

"[He] calls us up and was like, 'Hey Rick, wanna make 200 bucks and throw your kid in the drink?,'" Rick recounts. "I was like, 'What's up?' And he's like, 'Well, I'm shooting kids all this week, why don't you meet me at the Rose Bowl, throw your kid in the drink?' And we just had a big party at the pool, and no one had any idea what was going on!" 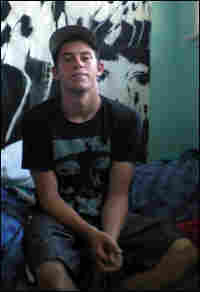 Spencer Elden, now 17, says he thinks it would have been cooler to have been a teen in the early '90s. Chana Joffe-Walt /NPR hide caption

Over the coming years, 26 million albums were sold. As Elden learned to walk, talk and sing — his pale baby arms stretched across millions of grungy fans' walls; his private parts stood magnified across billboards and floors.

In some places, his image stuck. The other day, his friends spotted a giant Nevermind photo on the floor of a record store in Hollywood.

"My friend is all like, 'Hey I saw you today.' And I'm like, 'Dude, I was working all day.' And he's like, 'No, I went to Geffen Records, and you're on the floor and you're floating and I stepped on your face. 'Cause I guess they have like a floating thing where people can like walk on me and stuff ... so it's kinda cool," he says.

Life in general isn't quite as "cool" as it was when he jumped naked in the pool in the early '90s, though, he says. These days, his peers are too stuck on the Internet and video games. Ironically, he yearns for the era that gave Kurt Cobain, the lead singer for Nirvana, so much angst.

These days, Elden says, his peers concentrate on "playing Rock Band on Xbox, like, that's not a real band! That's the difference between the '90s and kids nowadays; kids in the '90s would actually go out and make a [real] band!" 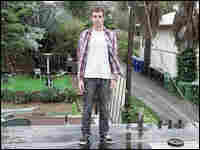 Spencer Elden poses for photographer Jason Lazarus with his clothes on — as he is prone to do these days. Elden hopes he can finish his high school requirements this summer. Jason Lazarus hide caption 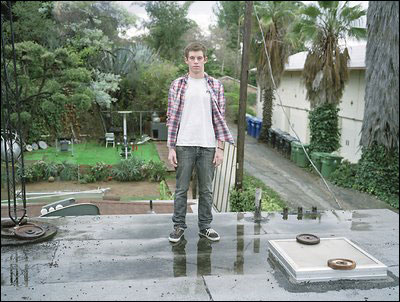 Spencer Elden poses for photographer Jason Lazarus with his clothes on — as he is prone to do these days. Elden hopes he can finish his high school requirements this summer.

But overall, life is good, he says. When he's not being repressed by video games and computers, Elden blasts music — mostly techno — and carries around a big bag of angst, mostly around the fact that he is "so over" high school.

"Same people, same teachers ... going to your locker, worrying about stupid girls ... I wanna get something going, I wanna travel," he says.

Last fall, travel he did — all the way to military boarding school for six months. All his parents will say is that he's done his fair share of "testing authority."

Now he's trying to graduate from high school a year early. And he's talking about applying to West Point or becoming an artist ... or something.