Accessibility links
Glitter And Doom: Tom Waits In Concert Recorded at Atlanta's historic Fox Theater on July 5, Waits delivers a stunning and epic two-and-a-half hour performance, including songs he says he's never attempted outside of the studio before. 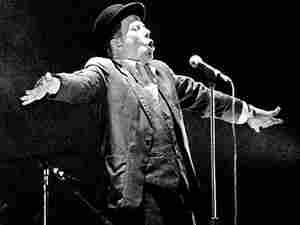 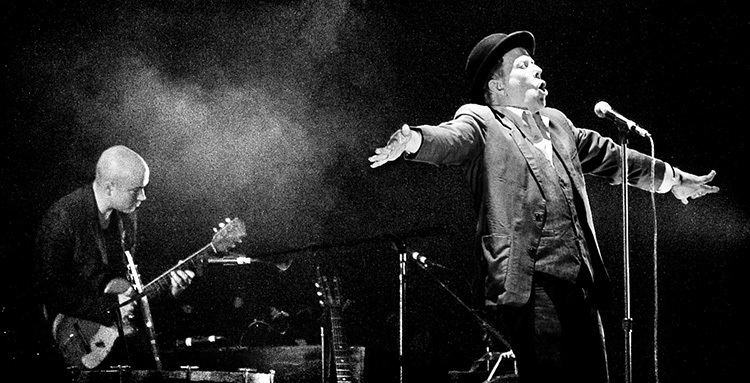 "Lucinda / Ain't Going Down to the Well"

"Down in the Hole"

"All the World Is Green"

"Cause of It All"

"Till the Money Runs Out"

"Lost in the Harbor"

"Innocent When You Dream"

"Dirt in the Ground"

"Get Behind the Mule"

"Hang Down Your Head"

"Anywhere I Lay My Head"

A trip through the world of Tom Waits can be disorienting. His ramshackle story-songs, with their creaky instrumentation and dusty poetry, usually leave listeners with more questions than answers, and his persona outside of his music revolves around a playful but guarded mix of fiction and reality.

To promote his latest tour, Waits offered the media an extended print interview — one he conducted with himself — and a taped press conference, featuring Waits seated at a table of microphones, answering questions amid bursts of flashbulbs and murmurs. Only at the end, as Waits donned a bowler hat and exited, did viewers see that the room was empty and the sound of the press corps was merely a record playing.

Both interviews were filled with more wildly imaginative stories and questionable trivia (was a sunken Japanese freighter really raised with 20 million ping-pong balls?) than actual details of the tour. But that's the allure of Tom Waits: It's hard to know what to believe, but the world he creates is enchanting enough to get lost in.

Here's what we do know: Waits has dubbed his summer 2008 tour "Glitter and Doom." It's a trek through the lower half of the U.S. he describes as "PEHDTSCKJMBA" (pronounced "pess-kuh-JUM-buh), an acronym for each of the tour's stops: Phoenix, El Paso, Houston, Dallas, Tulsa, St. Louis, Columbus, Knoxville, Jacksonville, Mobile, Birmingham and Atlanta.

For his Atlanta stop, recorded at the city's historic Fox Theater on July 5, Waits delivered a stunning and epic two-and-a-half-hour performance, including songs he says he's never attempted outside of the studio before. Backing Waits is a five-piece group featuring Seth Ford-Young (upright bass), Patrick Warren (keyboards), Omar Torrez (guitars), Vincent Henry (woodwinds) and Casey Waits (drums and percussion). "They play with racecar precision and they are all true conjurers," Waits says. "They are all multi-instrumentalists and they polka like real men."

Waits wraps his tour with seven stops in Europe, including his first-ever concerts in Spain and the Czech Republic, with a finale in Dublin on Aug. 1.