Accessibility links
Charlotte A. Cavatica: Bloodthirsty, Wise And True She's a spider's spider — sophisticated, pretty (by her own account), authoritarian — and she says something profound about love and commitment. Melissa Block looks at the heroine of Charlotte's Web. 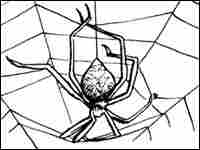 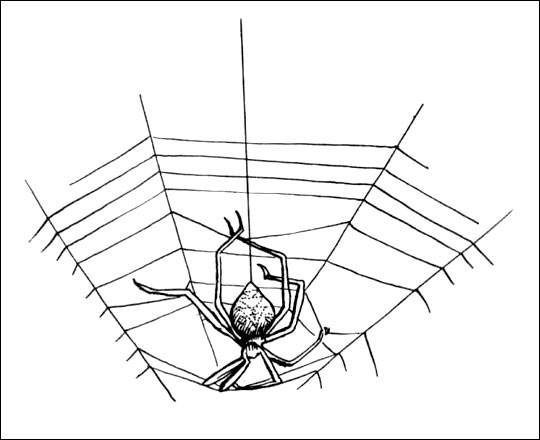 Charlotte A. Cavatica is the "sophisticated," "loyal," "disciplined" — and unapologetically hungry — heroine of Charlotte's Web.

Read, Listen To An Excerpt

Can You Read Charlotte Without Tears? The 'In Character' Blog 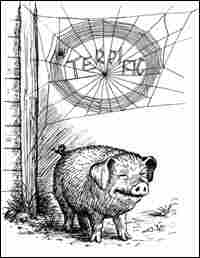 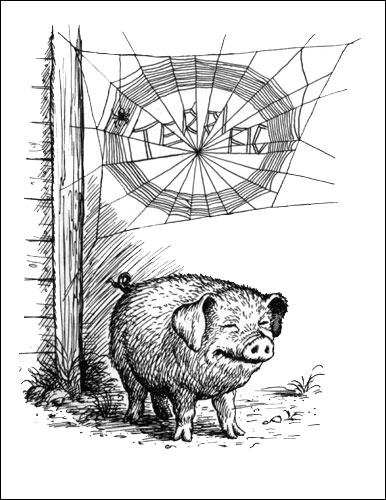 A few weeks ago, when I was on Cape Cod, I grew quite fond of a spider. She had spun her web in the corner of an outdoor shower, and the bright yellow pattern on her abdomen shone in the sun.

When a long-legged insect made the mistake of wandering into her web, I watched it disappear over the days, as the spider did what spiders do. I was learning — as E.B. White once wrote — that "once you begin watching spiders, you haven't time for much else."

I started to call her Charlotte.

Remember Charlotte? Charlotte A. Cavatica, the friendly, clever spider of Charlotte's Web. Charlotte is a spider's spider, a character who teaches us something profound about love and commitment.

She's pretty. (She says so herself.) She's utterly devoted to her new friend Wilbur, the pig.

And of course Charlotte is a gifted writer. The words she weaves into that web — "SOME PIG" ... "TERRIFIC" ... "RADIANT" ... "HUMBLE" — keep Wilbur from ending up as smoked bacon.

And as my daughter has pointed out, Charlotte always keeps her promises. When she says she'll save Wilbur's life, she does.

'Not Prettified In Any Way'

I asked some people who've spent a lot of time thinking about Charlotte how they would describe her. Peter Neumeyer, author of The Annotated Charlotte's Web, says one word always comes to mind: soignee.

"Loyal," says Martha White — E.B. White's granddaughter. "She can also be severe and authoritarian. She knew her way around the barnyard."

"Among other things, she is a New Englander," says the New Yorker writer Roger Angell.

He's E.B. White's stepson, and he says that's a comparison White himself made.

"She is disciplined, and she is orderly," Angell says. And then, laughing: "And she's a trapper! What she does is trap flying things, and eat them."

White wrote that he "pulled no punches" in Charlotte's Web. "The spider in the book is not prettified in any way," he said. "She is merely endowed with more talent than usual."

That's part of why she's such a singular children's-book heroine.

"I came out ahead," White wrote, "because of not trying to patronize an arachnid."

White spent a full year studying spiders before he started writing about one. He studied their habits — their temperament, as he fondly put it. He studied drawings of how they're put together. He consulted with a curator of spiders at the Museum of Natural History in New York, asking questions about a spider's life.

"There are little drawings, with vectors indicated of the sequence in which the spider ... makes her web, which he describes so very precisely," Neumeyer explains.

In one passage, Angell points out, Charlotte names the seven different parts of her legs for Wilbur, who listens with eager, childlike fascination: "the coxa, the trochanter, the femur, the patella, the tibia, the metatarsus and the tarsus."

So we learn, as White himself learned, what makes spiders work — their spinnerets and other tiny parts.

'A Mona Lisa Face' — With A Few Amendments

All those spiderly details help White capture his audience. But Charlotte's Web is, after all, an illustrated book — and White also had strong feelings about how Charlotte should look.

He said he wanted her to be beguiling, but he insisted she shouldn't have a human face.

White sent two huge books to the illustrator, Garth Williams, with pictures of 30,000 spiders — all of them gruesome, Williams noted.

The artist struggled with Charlotte, and finally came up with what he called "a Mona Lisa face."

But as Neumeyer recounts in The Annotated Charlotte's Web, it was White's ideas that prevailed.

"White got rid of the face that Garth had put on Charlotte, and drew in two little eyes — you can just barely see them — and three hairs," Neumeyer says.

Soon, Hollywood came calling. But White held out for years, worried about what would happen to his story on the screen.

"Anybody who can't accept the miracle of the web," he wrote to his agent, "shouldn't try to film it."

But in the end, he agreed. And when the Hanna-Barbera cartoon musical came out in 1973, Charlotte became a curvy, glamorous spider with a coy smile and heavy-lidded blue eyes. Debbie Reynolds provided the voice.

And sure enough, Charlotte sings: "Chin up, chin up/Everybody loves a happy face."

You can imagine how White felt about that.

There was one key point, though, on which the author would not back down. In his book, at the end, Charlotte lays her eggs — and dies. Her death is central to the story.

Hollywood, says Neumeyer, wanted a happier ending. White wasn't having any of it.

"He held out at great financial cost to himself for years and years because people wanted to fudge on that," Neumeyer says. "They were worried about Charlotte dying in a children's film."

But White prevailed, and die Charlotte did.

Martha White, who serves as literary manager of her grandfather's estate, still gets letters from readers — children and adults.

"I think many more adults are upset than children," White says. "Children just ride the wave. They're able to go in those leaps and bounds that adults don't always do."

Even White himself, when he recorded the audiobook in 1970, had trouble getting through that scene.

"He broke down — just as I did," recalled audiobook producer Joe Berk in a 1991 NPR interview. "We did 17 takes. ... We went on a short walk, and he turned to me, and he said, 'It's ridiculous: a grown man reading a book that he wrote, and being unable to read it aloud because of tears.' "

A Tribute From A Devoted Partner?

I've read Charlotte's Web many times, first as a child, now as a parent. And each time, it seems I find some new dimension, another side of Charlotte I hadn't appreciated before. Her sarcasm; her pride; her wit.

When Martha White reads Charlotte's Web — or listens to the recording made by her grandfather — she's struck now by a family resemblance.

"I found myself wondering today whether my grandfather was in some way writing an appreciation of his wife," White says. "Because Charlotte is loyal, and true, and a good writer. ... Many of the words he uses to describe Charlotte certainly have been true of his wife. Certainly they were close friends, and close allies, and would have done anything to have saved each other's lives, if they could have done it."

E.B. and Katharine White were married for almost 50 years. And if Charlotte the spider was a tribute from a writer to his wife — for what higher honor could there be? — then the seeds were sown early.

In 1929, a couple of weeks after their marriage, E.B. White sent his bride a poem he had written. It's called "Natural History":

The spider, dropping down from twig,
Unwinds a thread of his devising;
A thin, premeditated rig
To use in rising.

And all the journey down through space,
In cool descent, and loyal-hearted,
He builds a ladder to the place
From which he started.

Thus I, gone forth, as spiders do,
In spider's web a truth discerning,
Attach one silken strand to you
For my returning.

Far into the night, while the other creatures slept, Charlotte worked on her web. First she ripped out a few of the orb lines near the center. She left the radial lines alone, as they were needed for support. As she worked, her eight legs were a great help to her. So were her teeth. She loved to weave and she was an expert at it. When she was finished ripping things out, her web looked something like this: 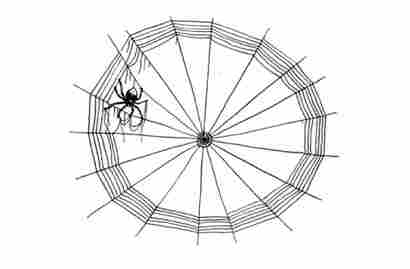 A spider can produce several kinds of thread. She uses a dry, tough thread for foundation lines, and she uses a sticky thread for snare lines – the ones that catch and hold insects. Charlotte decided to use her dry thread for writing the new message.

"If I write the word 'Terrific' with sticky thread," she thought, "every bug that comes along will get stuck in it and spoil the effect."

Charlotte climbed to a point at the top of the left hand side of the web. Swinging her spinnerets into position, she attached her thread and then dropped down. As she dropped, her spinning tubes went into action and she let out thread. At the bottom, she attached the thread. This formed the upright part of the letter T. Charlotte was not satisfied, however. She climbed up and made another attachment, right next to the first. Then she carried the line down, so that she had a double line instead of a single line. "It will show up better if I make the whole thing with double lines."

She climbed back up, moved over about an inch to the left, touched her spinnerets to the web, and then carried a line across to the right, forming the top of the T. She repeated this, making it double. Her eight legs were very busy helping.

Charlotte got so interested in her work, she began to talk herself, as though to cheer herself on. If you had been sitting quietly in the barn cellar that evening, you would have heard something like this: 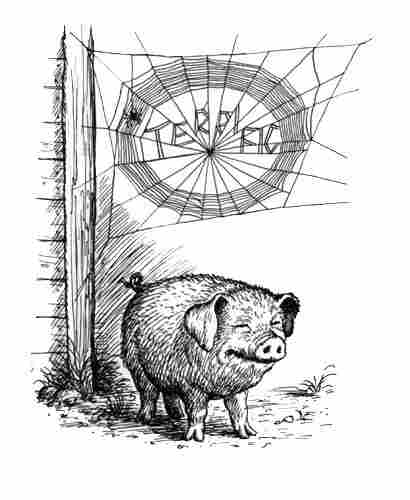 And so, talking to herself, the spider worked at her difficult task. When it was completed, she felt hungry. She ate a small bug that she had been saving. Then she slept.

Next morning, Wilbur arose and stood beneath the web. He breathed the morning air into his lungs. Drops of dew, catching the sun, made the web stand out clearly. When Lurvy arrived with breakfast, there was the handsome pig, and over him, woven neatly in block letters, was the word TERRIFIC. Another miracle. 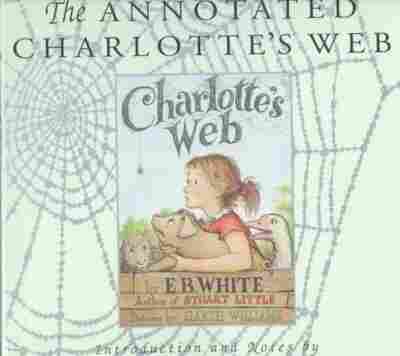