Accessibility links
Hasbro Gives Clue Board Game A Makeover This time, the murder at the heart of the game occurs at a party of the rich and famous. The weapons have been updated, too. And though the characters' names are the same, they've got new back stories.

The new version of Clue takes place in a modern mansion at a party of the rich and famous. Courtesy Hasbro hide caption 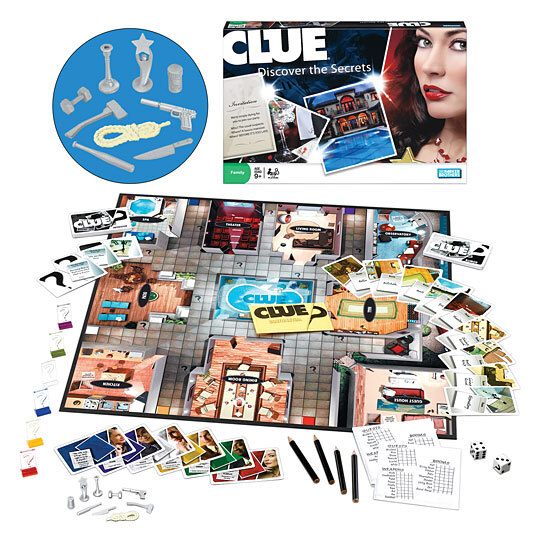 The new version of Clue takes place in a modern mansion at a party of the rich and famous. 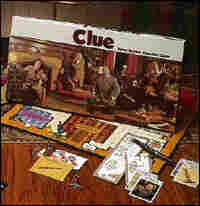 The Clue game from the 1980s included a lead pipe as a weapon. Players won't see it in the updated board game — but they will see a baseball bat, a trophy and an ax. Courtesy Hasbro hide caption

The much-beloved murder mystery game Clue is getting a makeover. It's been on the shelves for 60 years, but game maker Hasbro has redesigned the game for a modern audience.

Rob Daviau, who helped design the new version, tells NPR's Melissa Block that the new game takes place at a modern mansion — at a party of the rich and famous.

The weapons have changed, the characters have bios and the mansion has new rooms, like a spa, a theater and a guesthouse. And the company added an element of suspense with a second deck of cards.

"A board game is basically a story that you're telling around the table together. In this case, it's a murder mystery," Daviau says. "So what's the pacing? How nervous should you be? How much time do people have? Because we know that people have less time now than they did before."

The new game has nine weapons instead of six. There is no more lead pipe, and the revolver is now a pistol. The company also added a trophy, an ax and a baseball bat.

"The weapons aren't in scale to each other," Daviau says. "It oddly took a very long time to get the proportions of the baseball bat right — the handle, versus the knob, versus the thickness. My engineer was ready to kill me because I kept sending him back to trim another millimeter off the barrel."

The characters have changed, too. Miss Scarlet has a first name: Cassandra. Colonel Mustard left the military; he's a former football star. Victor Plum, formerly the professor who was always known as the smartest man in the room, became recast as a self-made video game designer — a dot-com billionaire.

But what about people who cherished the classic version of Clue and may not want to see changes? Daviau says Hasbro was very conscious of that when updating the game.

"We wanted something that the mom or dad who's bringing home for the family [could say], 'This is what I remember, and this is what I want to play with my kids,' " Daviau says. "At the same time, we wanted something the kids would feel like it belonged to them. And this is something that's very appealing to them. So we tried to blend those two worlds. It plays like Clue, it feels like Clue, but it just feels like Clue that would have been created in the 21st century."