Accessibility links
Novelist Highlights The Rich Flavor Of Old Istanbul For historian-turned-mystery-writer Jason Goodwin, the bustling Istanbul bazaar is a perfect setting for murder, and the evening call to prayer is "a good time to kick a man to death in the street."

Morning Edition resumes its Crime in the City series. 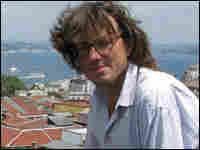 British author Jason Goodwin first wrote about Istanbul in his nonfiction work, Lords of the Horizon, a history of the Ottoman Empire. Ivan Watson/NPR hide caption 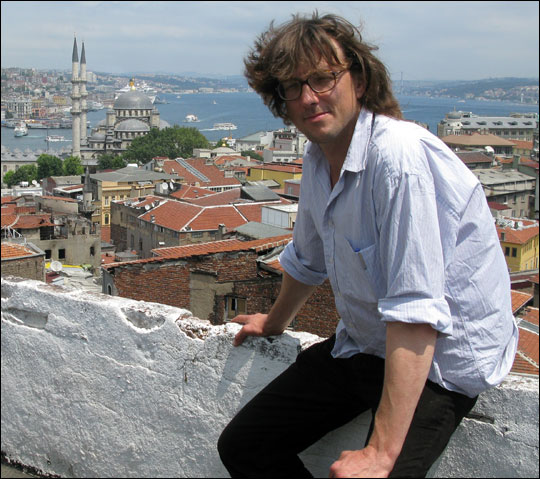 British author Jason Goodwin first wrote about Istanbul in his nonfiction work, Lords of the Horizon, a history of the Ottoman Empire.

"It was the hour of the evening prayer ... a good time to kick a man to death in the street."

A visit to the Egyptian spice market

Read an excerpt of The Snake Stone. 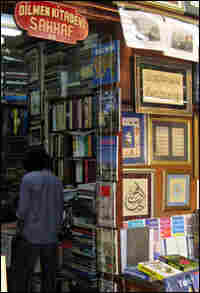 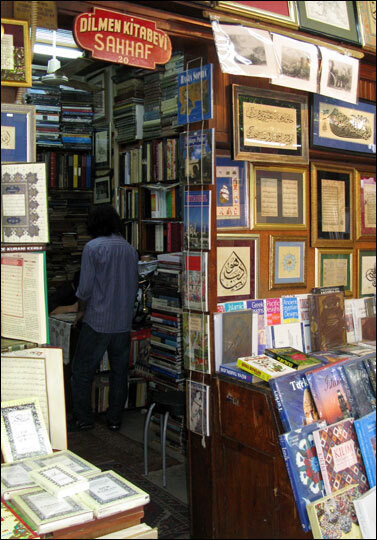 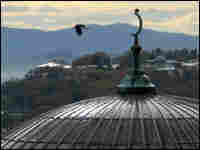 The evening call to prayer rises from domed mosques and minarets that make up the city's striking skyline. Ivan Watson/NPR hide caption 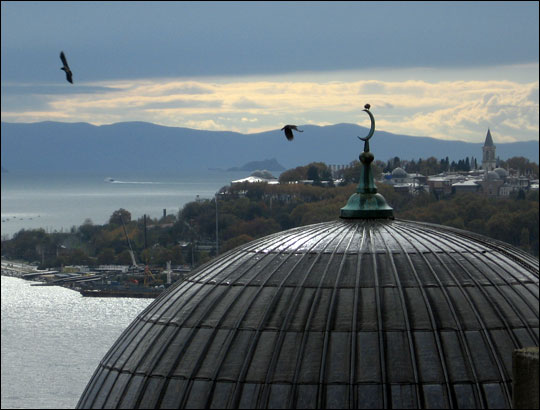 The evening call to prayer rises from domed mosques and minarets that make up the city's striking skyline. 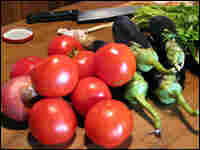 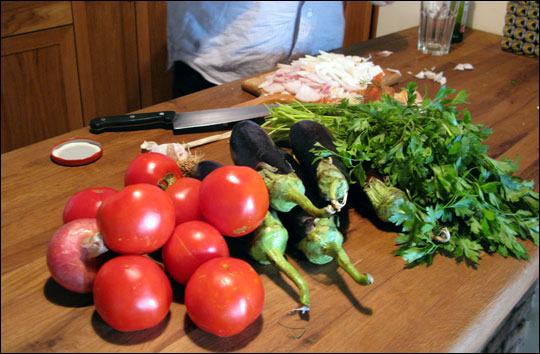 Both Goodwin and Yashim, his fictional detective, spend a lot of time cooking. Here, the author prepares imam bayildi, an Ottoman dish of eggplants, garlic, onions and olive oil.

Historian-turned-mystery-writer Jason Goodwin steps through a centuries' old archway into the carnival-like atmosphere of Istanbul's grand bazaar, and his eyes light up. Sizing up the crowds of Turks and foreign tourists who surge past the bazaar's hundreds of shops, Goodwin declares the setting perfect for a murder.

The bazaar isn't the only local institution that inspires Goodwin's delightfully sinister imagination. In his novel, The Snake Stone, he calls the evening call to prayer — a haunting chant that erupts at sunset from many of the domed mosques and minarets that make up the city's striking skyline — "a good time to kick a man to death in the street."

If it all sounds rather foreboding, it's helpful to remember that the Istanbul Goodwin writes about is not the booming megalopolis of modern-day Turkey. Instead, he imagines the city as it was in the 19th century, when it was the capital of the vast Ottoman Empire. It's a place he describes in his book, The Janissary Tree, as "a city of mosques, churches, synagogues, of markets and emporia, of tradesmen, soldiers, beggars, the city to beat all cities, over-crowded and greedy."

The characters that inhabit Goodwin's Istanbul include a sultan who slowly drinks himself to death, an impoverished Polish ambassador whose country has been carved up by Russia and Germany, and a crafty Greek bookseller who doesn't know how to read.

The hero among this cast is a soft-spoken palace detective named Yashim, who also happens to be a eunuch. Goodwin describes the character as a "tangent to society ... someone who belongs to the society that he patrols but at the same time [is] different."

Because of his unusual condition — the origins of which have yet to be explained — Yashim happens to be the only person in Istanbul allowed to investigate murders in that most forbidden of places: the Sultan's harem.

"I'm dealing with a very traditional, essentially Muslim society in 19th century Istanbul," says Goodwin of his detective. "A eunuch is the only character who can really get around."

Many of the places where Yashim's adventures take place still exist today. On a recent tour, Goodwin brings a visitor to the Yerebatan Cistern, an ancient underground structure that was used to store water in Byzantine times. It is here, in the cold, dark waters of this 6th century cistern, that the eunuch detective ends up battling a murderous enemy.

Just a few minutes' walk from the cistern, Goodwin stops into another of his favorite Istanbul landmarks, the famous Egyptian spice market, where shopkeepers hawk exotic flavors to passing visitors, much as they probably did more than a century ago.

When not solving crimes and chasing murderers down Istanbul's winding streets, Yashim — like the author himself — spends a lot of time cooking.

"He's a eunuch," explains Goodwin, "so there are certain things he doesn't derive quite so much pleasure from, as perhaps our listeners would."

Jokes aside, there's another reason Goodwin's hero nurtures a passion for cooking: Food allows the author to give his readers a more complete sense of the Ottoman world.

Goodwin discusses the importance of food in his fiction while preparing an Ottoman dish called imam bayildi, or "the imam swoons." It's a mixture of eggplants, garlic, onions and lots of olive oil.

"One of the obvious ways into [the culture] is what did it taste like? What did they eat?" Goodwin says.

With this writer, the Ottoman world tastes delicious. 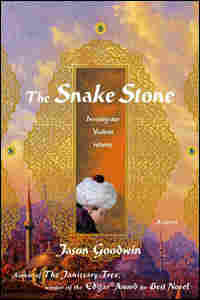 The voice was low and rough and it came from behind as dusk fell.

It was the hour of the evening prayer, when you could no longer distinguish between a black thread and a white one, in ordinary light. George pulled the paring knife from his belt and sliced it through the air as he turned. All over Istanbul, muezzins in their minarets threw back their heads and began to chant.

It was a good time to kick a man to death in the street.

The grainy ululations swept in sobbing waves across the Golden Horn, where the Greek oarsmen on the gliding caïques were lighting their lamps. The notes of prayer rolled over the European town at Pera, a few lights wavering against the black ridge of Pera Hill. They skimmed the Bosphorus to Üsküdar, a smudge of purple fading back into the blackness of the mountains; and from there, on the Asian side, the mosques on the waterline echoed them back.

A foot caught George in the small of his back. George's arms went wide and he stumbled toward a man who had a long face as if he were sorrowing for something.

The sound swelled as muezzin after muezzin picked up the cry, weaving between the city's minarets the shimmer of a chant that expressed in a thousand ways the infirmity of man and the oneness of God.

After that the knife wasn't any good.

The call to prayer lasts about two and a half minutes, but for George it stopped sooner. The sad-faced man stooped and picked up the knife. It was very sharp, but its end was broken. It wasn't a knife for a fight. He threw it into the shadows.

When the men had gone, a yellow dog came cautiously out of a nearby doorway. A second dog slunk forward on its belly and crouched close by, whining hopefully. Its tail thumped the ground. The first dog gave a low growl and showed its teeth.

Maximilien Lefèvre leaned over the rail and plugged his cheroot into the surf which seethed from the ship's hull. Seraglio Point was developing on the port bow, its trees still black and massy in the early light. As the ship rounded the point, revealing the Galata Tower on the heights of Pera, Lefèvre pulled a handkerchief from his sleeve to wipe his hands; his skin was clammy from the salt air.

He looked up at the walls of the sultan's palace, patting the back of his neck with the handkerchief. There was an ancient column in the Fourth Court of the seraglio, topped by a Corinthian capital, which was sometimes visible from the sea, between the trees. It was the lingering relic of an acropolis that had stood there many centuries ago, when Byzantium was nothing but a colony of the Greeks: before it became a second Rome, before it became the navel of the world. Most people didn't know the column still existed; sometimes you saw it, sometimes not.

The ship heaved, and Lefèvre gave a grunt of satisfaction.

Slowly the Stamboul shore of the Golden Horn came into view, a procession of domes and minarets that surged forward, one by one, and then modestly retired. Below the domes, cascading down to the busy waterfront, the roofs of Istanbul were glowing red and orange in the first sunlight. This was the panorama that visitors always admired: Constantinople, Istanbul, city of patriarchs and sultans, the busy kaleidoscope of the gorgeous East, the pride of fifteen centuries.

Lefèvre shrugged, lit another cheroot, and turned his attention to the deck. Four sailors in bare feet and dirty singlets were stooped by the anchor chain, awaiting their captain's signal. Others were clawing up the sails overhead. The helmsman eased the ship to port, closing in on the shore and the countercurrent that would bring them to a stop. The captain raised his hand, the chain ran out with the sound of cannon fire, the anchor bit, and the ship heaved slowly back against the chain.

A boat was lowered, and Lefèvre descended into it after his trunk.

At the Pera landing stage, a young Greek sailor jumped ashore with a stick to push back the crowd of touts. With his other hand he gestured for a tip.

Lefèvre put a small coin into his hand and the young man spat.

"Oho!" The Greek squinted at the coin and his face brightened.

"Ve-ery good." He redoubled his efforts with the touts. "These is robbers. You wants I finds you porter? Hotel? Very clean, Excellency."

"Bad mans here. You is first times in the city, Excellency?"

"No." Lefèvre shook his head.

The men on the landing stage fell silent. Some of them began to turn away. A man was approaching across the planked walk in green slippers. He was of medium build, with a head of snowy white hair. His eyes were piercingly blue. He wore baggy blue trousers, an open shirt of faded red cotton.

"Doctor Lefèvre? Follow me, please." Over his shoulder he said: "Your trunk will be taken care of." 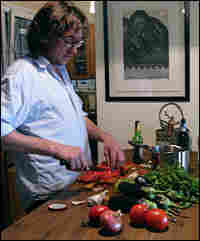 One of the most delicious — and simple — recipes to emerge from the Ottoman's love affair with the eggplant is this one, known as imam bayildi — "the imam swoons." The trick is to peel each eggplant lengthwise, in alternating strips, to keep its shape as it subsides into the rich tomato sauce.

To make a pocket in each eggplant you make an incision in them from top to tail, not cutting the whole way through. Rub them inside and out with salt and set aside for half an hour. This sweats out the bitterness. Rinse the eggplants in cold water, and squeeze the flesh with your thumbs to make the pocket bigger.

Meanwhile, make a fresh tomato sauce using onion, lots of garlic, a spoonful of sugar, a twist of black pepper, a generous glug of olive oil, and three or four chopped tomatoes. Put them all into a pan together and let them simmer for ten minutes or so, until the onions are tender.

Back to the eggplants: squeeze them out and fry them gently on all sides until they go brown. Set them in a baking dish, stuff the pockets with a generous heap of tomato sauce, add about 1/2 a cup of water and a big splosh of olive oil, and bake them, covered, in a hot oven for about three quarters of an hour.

You can serve them hot; but better still give them time to cool and serve at room temperature. You know how good it is to pick at a cold stew? Same thing. 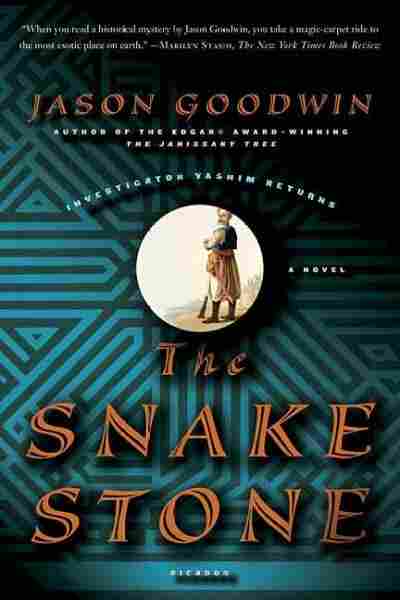