Accessibility links
Herbie Hancock: Newport Jazz 2008 The keyboard giant brought a stellar group of musicians to the JVC Jazz Festival Newport to help perform classics from his catalog, as well as recent reconfigurations of pop music. 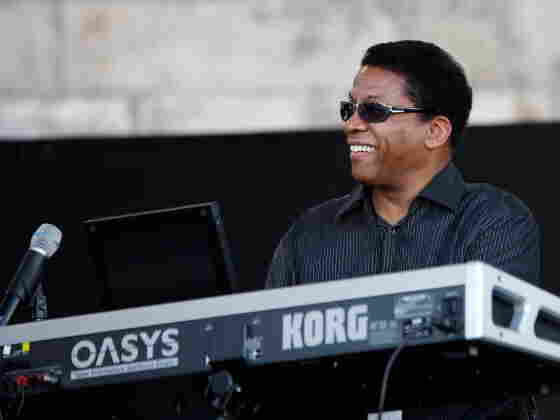 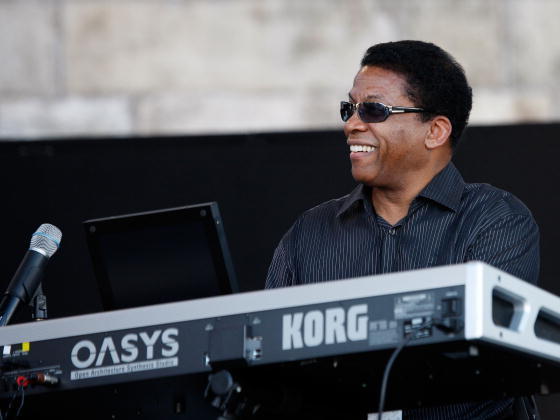 Herbie Hancock at the Korg on stage at Newport.

One of the true public faces of jazz, keyboard giant Herbie Hancock brought a stellar group of musicians to the JVC Jazz Festival Newport to help perform classics from his catalog, as well as some recent reconfigurations of pop music.

Hancock's set, recorded on Aug. 10, played out as a highlight reel of his vast repertoire. He led off with "Actual Proof," from his 1970s electronic funk experiments, and closed with "Chameleon," an iconic track from the same period. In between, Hancock called on guest vocalists Sonya Kitchell and Amy Keys to sing on three tunes — covers of Joni Mitchell, U2 and Leon Russell via Donny Hathaway — from his genre-crossing recent work. He also worked in his bounding anthem "Cantaloupe Island," his first major composition, and performed an encore with an intriguing odd-meter tune by guitarist Lionel Loueke.

Loueke, the Beninese guitarist whose solo projects often feature him vocalizing over tactfully processed acoustic guitar picking, showed his versatility on the electric guitar, even playing a blues solo a la B.B. King. Drummer Vinnie Colaiuta was already known for his versatility, and as one of the most in-demand studio drummers in popular music. Dave Holland long ago established himself as a premier bassist, having performed every conceivable style of jazz improvisation since the late 1960s, when he first played with Hancock; he used both stand-up and Fender bass. Chris Potter demonstrated why he's seen by critics as a leading light of modern saxophone, blowing solos both blustery and understated.

But this was Hancock's gig, and he supplied plenty of characteristic flourishes on both synthesizers and acoustic piano. Hancock established his jazz credibility early and often in the 1960s, documenting it on a string of albums filled with acclaimed original compositions and deft, lyrical improvisation. He took those forward-thinking chops to one of Miles Davis' most heralded groups as the decade progressed, and continued to evolve as Davis did, making extended forays into electronics and jazz fusion. Hancock continues to make inroads beyond the jazz world; his last two albums were Possibilities, a series of collaborations with pop stars, and River: The Joni Letters, a sophisticated (and award-laden) jazz rendering of mostly Joni Mitchell numbers.