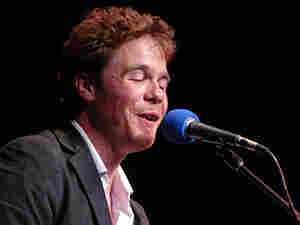 A literary bent informs Idaho native Josh Ritter's clever, imaginative story-songs. His latest record, The Historical Conquests of Josh Ritter, was released in 2007 and popped up on several year-end "best of" lists.

Ritter independently released his first two albums and saw a record label fold underneath him before breaking through, first in Ireland and then in the U.S. Ritter's touring band features mostly players from the Conquests sessions, including producer and multi-instrumentalist Sam Kassirer on piano and keyboards, Zack Hickman on bass, Austin Nevins on electric guitar and Liam Hurley on drums.

He dedicates the mystical "Girl in the War" to one of his songwriting mentors, Loudon Wainwright III, who had appeared on the stage only moments before this Mountain Stage set.