Accessibility links
Scooter Rundown: Best Fits From Tall To Small Record numbers of Americans are getting out of their cars and hopping onto scooters, spurred by high gas prices and concern for the environment. But with many options and styles to choose from, picking the right ride can be tricky.

Part Two Of This Series

Record numbers of Americans are getting out of their cars and hopping onto scooters, spurred by high gas prices and concerns for the environment. But with many options and styles to choose from, picking the right ride can be tricky.

While many buyers judge scooters mostly by their looks, others come armed with a list of performance benchmarks, comparing engine size, seat height and storage space, among other options.

And those options can drive prices upward, from around $2,000 for a serviceable around-town scooter to more than $6,000 for a highway-ready bike with extra storage space. Still, those in the industry say people don't realize the variety of scooters out there.

"They think, 'Oh it's a scooter, they're all just the same,'" said Adam Baker, co-founder of Sportique, a small chain of scooter stores in Colorado.

Not Your Uncle's Scooter

High gas mileage (over 100 mpg, in some cases) is only part of the reason scooters are popular. Some of the others:

"But it's not. It's just like cars — every car is going to fit a different person a little bit," with different handling, braking and acceleration, he said.

Scooters For All Sizes

An informal survey of Internet bulletin boards found that two types of people seem to worry the most about fitting on a scooter: small women and large men. And beyond a desire to avoid looking silly, the correct fit plays a crucial role in safety.

Baker seconded the Buddy — and also recommended that those looking at the Metropolitan consider the Sento, a new scooter by Kymco that he said is very low to the ground. Kymco, which builds products for Honda on contract, essentially adds a front disc brake to a bike that is very similar to the Metropolitan.

Via e-mail, de la Mora had one more suggestion: a model like her own 2005 Vespa.

"I personally am partial to getting a used Vespa ET4 and putting the European (lower profile) seat on it," she said.

The result is that de la Mora can now stand flat-footed on her bike, instead of up on her toes. And, she said, "My ET4 handled much better for me once I put the lower seat on."

A low seat may be exactly why some tall people cringe at the idea of a scooter. After all, the image of riding around with one's knees up above one's elbows doesn't really jibe with the Euro-cool look many scooter buyers are seeking.

Baker said that his Sportique stores have sold scooters to pro basketball players, including NBA guard Chauncey Billups and some of his friends. Surely, if those guys can feel comfortable on a bike, there's hope for anyone over 6 feet tall.

"We sold them a bike called the Super 9, by Kymco," Baker said. "They just have the most leg room" for an around-town bike, he said.

Aside from comfort — and the cool factor — that extra leg room is also important for safety.

"The issue comes between the handlebar and where your front sits," Baker said. "Because when you sit down, your knee can get in the way of steering."

"I kind of compare it to a Jeep," Baker said. "It doesn't have that refined Italian sports-car look; it's more of a kind of tough, off-road rugged look." The bike, he said, should fit people up to about 6 feet 2 inches tall.

Another option is the Aprilia Scarabeo, an Italian bike noted by several riders for its leg room. And it comes with an optional tall windscreen, to shield bigger riders from the wind.

A Word About Weight

"If you get into some bumpy roads, I think you want some weight so you don't go flying off the road."

Different riders have different ideas about the perfect weight. Some like a solid feel on the road; others prefer a nimble, lightweight bike.

And especially at speeds over 35 mph, riders can be forgiven for wanting a bit of ballast against the wind.

"But if the bike is too heavy for the rider to push, then it's just plain too heavy," de la Mora said.

In addition to a test-drive, then, prospective buyers may want to try pushing a scooter around at the shop, simulating putting it into a parking spot or moving it across your garage.

And there's one other factor to consider, de la Mora says — especially in a hilly city like San Francisco: pushing the bike off its center stand after it's been parked on an incline.

Like motorcycles, scooters come in a wide range of motor sizes, measured in cc's, or cubic centimeters. The cc's refer to the amount of air and fuel the engine uses, similar to measuring liters in cars.

Baker recommends a 50cc scooter for places with lower-speed traffic, like small towns and inner-city areas. The bike can easily go around 30-45 mph.

For those driving in both cities and suburbs, it's best to be able to reach 45 to 55 mph, even if it's for short bursts. 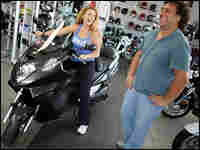 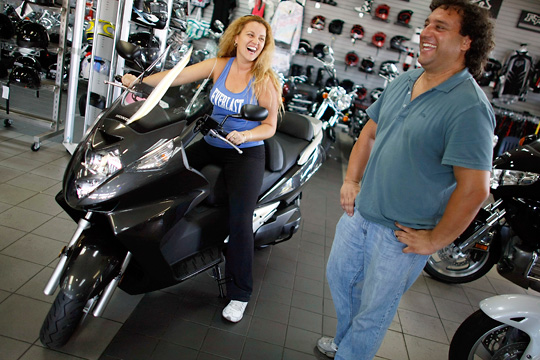 Laura Rolo and Walter De Echave check out a 500cc Honda scooter in Miami. Rolo said high gas prices made her turn to motor scooters to save money.

"I wouldn't go any smaller than 150ccs" for that kind of driving, Biechler said. And many 250cc models can reach 75mph, making them a good choice for highways.

In hilly terrain, the extra oomph is a necessity. De la Mora said that in San Francisco, "many shops don't even bother to sell 50cc bikes. While a few of our members have 50cc scooters, most prefer 150cc or above for navigating the hills."

Of course, fuel efficiency drops as engine displacement goes up. But most 150cc and 250cc scooters still get more than 60 miles per gallon — and some go far beyond that, even up to around 100 mpg.

In considering engine size, buyers should balance the desire to save on gas with the need to stay safe on the road.

"You need to have the power to get up and go, and get out of the way," Biechler said.

If you're buying a scooter, Baker recommends sticking with a local dealer or scooter shop. Buying online or at a flea market can bring a lower-quality scooter with mechanical problems that may range from annoying to dangerous. And if problems arise, the shop you bought it from is the best place to resolve them.

In terms of price, most of the scooters mentioned here retail in the $2,000 to $3,000 range. And as you would with a car purchase, make sure the quoted sale price includes variables like shipping and setup.

"For a lot of people, it kind of ruins the buying process" to find hidden fees and expenses, Baker said.

But it has become more common for scooter shops to embrace no-haggle pricing.

"They're honest with their pricing," Baker said, "so you don't have to go and argue with the guy in the suit."

Be Legal, Be Safe