Accessibility links
To Lower Blood Pressure, Open Up And Say 'Om' Meditating daily can lower blood pressure and reduce dependence on medication, according to a new study. Relaxation techniques increase the formation of a compound that opens up blood vessels, which in turn lowers blood pressure.

Listen
To Lower Blood Pressure, Open Up And Say 'Om' 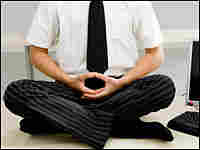 The "relaxtion response" technique was first described 30 years ago by cardiologist Herbert Benson.

At its core, the technique involves sitting quietly with eyes closed for 10 to 20 minutes and repeating silently a word or phrase as you breathe slowly and naturally.

Read more about how to meditate using the relaxation response at the Benson-Henry Institute for Mind Body Medicine.

In his 20 years as director of the hypertension program at Massachusetts General Hospital, Dr. Randy Zusman has maintained a rather traditional approach.

He writes plenty of prescriptions for standard medications to treat high blood pressure. But in recent years, Zusman has gotten more assertive with patients about lifestyle choices.

A Prescription For Meditation

Lately, Zusman has added a new recommendation: meditation. It's based on what he learned from a recent, three-month study he helped direct in conjunction with Boston's Benson-Henry Institute for Mind Body Medicine.

Patients who took part in the research were being treated for high blood pressure using standard medications and had agreed to try training in what's known as the relaxation response, a technique first described by cardiologist Herbert Benson 30 years ago.

"I'd been using medications in these patients, they were hopefully following my recommendations," Zusman explains. But "we still couldn't get their blood pressure under control. And I was somewhat skeptical that meditation could be the key to blood pressure control."

One patient in the institute study was a man named Jerome Smith. At 67, Smith is retired from his job as a corporate executive at DuPont, but he still works as a consultant part time. He says he's always had a type-A personality.

So, sitting alone in a quiet room was certainly not an easy technique.

"It was a foreign concept in terms of my normal practices," Smith says.

But he got lots of help, and with weekly one-one-one training sessions he learned how to meditate. "You're just letting all your tension go," he says.

Sometimes, realizing that you're not in control can make you more effective in matters where you do have control.

At the end of the study, Smith got some good news. His blood pressure was down, so he was able reduce the dosage of one of his medications.

Zusman says that about 40 of the 60 patients trained in the relaxation response had similar results.

What helps to explain these results, Zusman says, is the relatively new understanding of how the relaxation response assists the body.

It helps increase the formation of a compound called nitric oxide, which causes blood vessels to open up. This, in turn, lowers blood pressure.

"It's basically a plumbing problem. You're pushing the same amount of blood through a bigger pipe," Zusman says. "And that's what nitric oxide — which all of us make in our body — does in response to relaxation response."

Here's the rub: The relaxation response is not a gift. A daily meditation practice requires discipline and allocating time each day.

Smith, the study participant, says this is the hard part. A year after the study, he says his daily practice has begun to fall off because life's just gotten too busy

Although Zusman says this can happen, he's learned that the relaxation response is yet one more tool to control blood pressure.

Whether it's temporary or more long term depends on how well people can stick with it.