Accessibility links
1,000 Essential Recordings You Must Hear Covering music from Marian Anderson to ZZ Top, 1,000 Recordings to Hear Before You Die: A Listener's Life List covers all genres in its more than 900 pages. It's driven by the notion that "the more you love music, the more music you love." Author Tom Moon submits his picks for the best summer recordings.

Listen
1,000 Essential Recordings You Must Hear

Hear the Songs of Summer

I Want to Take You Higher 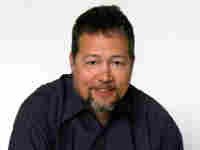 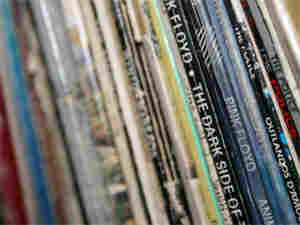 Tom Moon's 1,000 Recordings to Hear Before You Die surveys everything from Miles Davis and Karen Dalton to Nas and Frank Zappa. ryanchirnomas/via Flickr hide caption

From Marian Anderson to ZZ Top, 1,000 Recordings to Hear Before You Die: A Listener's Life List covers all genres of music in its more than 900 pages. It's driven by the notion that "the more you love music, the more music you love."

"I didn't want to have a standard criteria. Within any given artist, you could go 10 different directions," says the book's author, NPR music commentator Tom Moon.

While artists like Bob Dylan and Miles Davis receive multiple entries in the book, Moon says the picks ultimately came down to his gut. But they were also selected for their unbelievable beauty, like Ahmad Jamal's But Not for Me: Live at the Pershing. If you listen closely, you can hear the clinks of gimlet and martini glasses in the background. For a live set recorded in January in Chicago, Live at the Pershing works surprisingly well as summer record.

"Ahmad Jamal is one of the great Zen masters of jazz piano," Moon says. "He plays just what is needed and nothing more. Every phrase is perfect."

Sly and the Family Stone's Stand! was the definition of the Summer of 1969. Seven of the nine tracks were hit singles, and as Moon notes, every one of them conveys summer.

"[The songs] have that radiant sense of energy to them," he says. "It's like he's taken the basic workings of Motown and amped them up about 10 notches. The band is on fire. These guys really captured the spirit of summer music."

When violinist Janine Jansen and a small chamber group play Vivaldi's Four Seasons, Moon says that each of the seasons is beautifully rendered — but especially summer.

"Summer is my favorite part of this piece," Moon says. "It does feel like August and it does feel very thick. It starts off in a slow mood and it becomes more playful as it goes along, but you sense that when these guys recorded this, they were thinking about humidity — that thing you can't even escape in air conditioning."

When it comes to summer records, though, Bruce Springsteen's Born to Run is one that can be put on at any time of the year and immediately evoke summer nights of endless possibility.

"As we approach the end of summer, I always get that thing of 'I've got to grab on to every minute of this great weather and this inspiring air,' Moon says. "Then I realize it's inside these records." 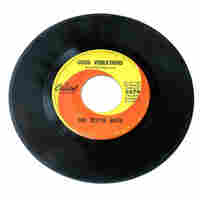 An original copy of the "Good Vibrations" single by The Beach Boys. hide caption 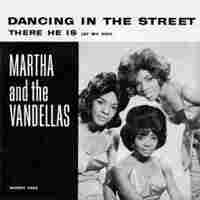 According to Tom Moon, "Dancing in the Street" is the quintessential summer single. hide caption 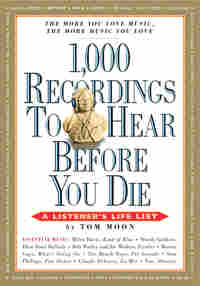 Forever Picking Up... "Good Vibrations" by The Beach Boys

"Good Vibrations" sits alone between the two artistic skyscrapers of Brian Wilson's career — the 1966 Pet Sounds, for which this single was originally intended, and the even more experimental Smile, the "concept" work that he shelved after more than a year of work and god-only-knows-what inner turmoil. The episodic suite is an embarrassment of melodic riches. It's all singable, yet really hard to sing. It's catchy, but not in the same way "Surfin' USA" is catchy. Each new section scales a totally different mountain range. One minute we're dootdoot-doodling along a happy hokey surfer dude landscape, the next we're in the fjords, with cascading vocal lines raining down a Beethovenian homage to the glory of nature.

The legend: Beach Boys songwriter Wilson removed the song from Pet Sounds because he didn't think it was finished. When the album didn't immediately become a hit, he went back to "Good Vibrations" and spent several months (and over $50,000, a then-unheard-of sum for a single) shuttling between studios trying to catch all the fragmented magic he heard in his head. In all, Wilson used over 70 hours of tape to create the single, which lasts 3 minutes and 35 seconds. It's the most idiosyncratic of pop experiences, an almost disconnected bag of tricks held together by, of all things, the high-pitched theremin, an otherworldly sounding electronic instrument that responds to hand motions. The single, which Wilson once described as a "pocket symphony," uses the squiggling trajectory of the theremin to represent positive vibrations in motion. Though it ventures all over the place, "Good Vibrations" somehow remains locked on that Total Joy frequency, the one that Wilson, and Wilson alone, owns.

The Quintessential Summer Single: "Dancing in the Street" by Martha and the Vandellas

This is the ultimate summer single, 2 minutes and 38 seconds of heat in audio form. Hear just a few seconds of the introduction, a fanfare for soul-revue horns, and pretty soon that school's-out-let's-party state of mind takes hold. Then the vocals start, and Martha Reeves, the former Motown secretary with the commanding voice, issues an "invitation across the nation, a chance for folks to meet." The lure? "Swinging and swaying and records playing." Of course. Perhaps the most magical part of the song, though, is the list of cities where Reeves expects dancing to break out. Lots of hits from the era contain references to specific locales, but few convey the sense of purpose Reeves brings to this. She makes you feel that if you're not out there, you're really missing something. Each city gets a little shot of love ("can't forget the Motor City") that registers as totally sincere; even some of pop's greatest voices, like Mick Jagger and David Bowie (who collaborated on a version in 1985), can't match Reeves' energetic roll call.

"Dancing in the Street" was co-written by Marvin Gaye, producer Mickey Stevenson and Ivy Jo Hunter and was originally intended for another Motown singer, Kim Weston, who passed on it. Recorded in two takes and featuring Hunter playing a crowbar for percussion, the tune became a smash hit for Reeves in the summer of 1964 and has been included on countless hits compilations since. Still, the Vandellas album issued by Motown in the spring of 1965, titled Dance Party, arguably remains the best. It's got "Dancing in the Street" and the scarily good subsequent single "Wild One," several smart B-sides and covers, and a thrilling Supremes-like tune called "Nowhere to Run," making it one of the few consistently strong long-players from singles-obsessed early Motown.

Excerpted from 1,000 Recordings To Hear Before You Die by Tom Moon. Reprinted by arrangement with Workman Publishing. © 2008.

Album
Ahmad Jamal at the Pershing: But Not for Me
Artist
Ahmad Jamal
Label
MCA
Released
1958