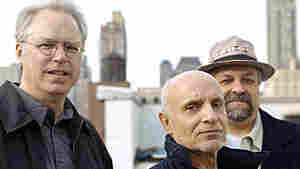 Drummer Paul Motian, guitarist Bill Frisell and saxophonist Joe Lovano have become known as towering figures of modern jazz over the last 25 years. For nearly that long, the three multi-talented statesmen have also been playing together in an abstract yet immediately accessible trio. Regulars at the Village Vanguard, they united underground once again for the second night of a two-week stay, broadcast live on air by WBGO and live online by NPR Music.

Together, the Motian/Frisell/Lovano unit has no single sound identity; their aesthetic, however, was distinct and readily identifiable. Owing to their long-standing association, the three communicated with heightened perception, anticipating each others' curveballs and responding in kind. Rotating tune and improvisation freely, the trio seemingly wove in and out of meter and harmony, yet always emerged together when the mood shifted anew.

For fans accustomed to the group's internal logic, there was comfort in familiarity. Bill Frisell brought a full arsenal of techniques and effects to the fore; Joe Lovano commanded all manner of saxophone attacks; Paul Motian's wonderfully askew drumming made lurching accents into wholly natural punctuation. These textures floated over tunes from Motian, who has a knack for drawing beauty with spare remarks, and Thelonious Monk — a prime influence, Motian says — whose off-kilter genius translated perfectly to an already asymmetrical band.

It was a set on the verge of not happening. The previous night, Lovano was called away on an emergency — he finally left Cleveland at 3:30 p.m. before a 9 p.m. show. (Bill McHenry, who has recorded several times with Motian, proved a capable substitute.) But the three all made it to stage for showtime, not having missed a beat, quite literally.

Having appeared on literally hundreds of albums in more than 50 years — several of which were recorded at the Vanguard — Paul Motian is no stranger to jazz fans. His name first emerged in the wide public spotlight while playing in pianist Bill Evans' trio, another highly communicative and critically praised group; his percussion can be heard on that band's canonic recordings captured from the Village Vanguard in 1961. Since the 1970s, Motian has also led his own groups and recordings, and continues to appear at the Vanguard as both bandleader and sideman several weeks a year.

In 1981, Motian recorded a quintet album called Psalm, and called upon the young Bill Frisell and Joe Lovano to fill out his ensemble. The two Berklee classmates later joined Motian in a trio lineup, and all have reconvened from time to time ever since. In between trio appearances, Frisell and Lovano both achieved recognition leading scores of their own projects. Frisell's genre-crossing electric-guitar attack and Lovano's full-toned fluency have generated two catalogs as musically diverse as they are large.

Motian, Frisell and Lovano have recorded easily over a dozen unique discs as a trio or rhythm section since the 1980s, including at least one live at the Village Vanguard. Their latest, Time and Time Again, came out in early 2007.