Accessibility links
Tego Calderon: Reggaeton On Black Pride Reggaeton is the biggest-selling genre of Latin music. Its blend of hip-hop, reggae and Latin rhythms has been criticized as simplistic, violent and misogynistic. But the Puerto Rican artist and others use the form to celebrate "blackness," something rarely heard in Latin America.

Reggaeton is the biggest-selling genre of Latin music. Its blend of hip-hop, reggae and Latin rhythms has been criticized as simplistic, violent and misogynistic. But the Puerto Rican artist and others use the form to celebrate "blackness," something rarely heard in Latin America. 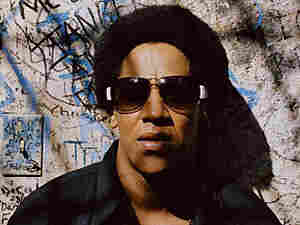 Tego Calderon is one of the top selling Reggaeton musicians. courtesy of the artist hide caption

Now, a story about Reggeaton and challenging stereotypes. Reggeaton is a blend of hip-hop, reggae and Latin rhythms that, like some rap music, has been criticized as violent and misogynistic. But some performers are winning praise for celebrating their African heritage. Enrique Riviera reports on one musician who's trying to bring social and cultural consciousness to Reggeaton.

ENRIQUE RIVIERA: Tego Calderon has shattered Reggeaton's stereotypes. Through an assortment of Afro-Caribbean rhythms and sharp social commentary, the rapper has transformed the way many young people see themselves.

Mr. TEGO CALDERON (Reggeaton Musician): (Through translator) I started to do music from a black beat, so that blacks can feel proud being black.

RIVIERA: I want to stay black, because this color is beautiful. That's something rarely heard in Latin America, a region with a long history of racial denial. Roland Roebuck is an Afro-Latino activist in Washington, D.C.

RIVIERA: As an example, Roebuck talked about a recent trip to the Dominican Republic.

Mr. ROEBUCK: And I saw an individual. He was sort of a policeman of my complexion, black. And I asked him, why are you holding that stick? And this area's called Dajabon, which is near the border with Haiti. And he said, this is to beat the black Haitians. This is to beat the black people. So I said to him, well, you should take that stick, and you should start beating yourself because you're black. And he said, no, I'm not black. I am Dominicano.

RIVIERA: While that attitude is common among Afro-Latinos, Tego Calderon says he was lucky.

Mr. CALDERON: (Through translator) Yeah, thank God my parents are people that are pro-black and are also for the independence of Puerto Rico. I grew up in a house that is very different than others, and I don't blame people that feel the way they do because they have been sold this. This has been passed down from generation to generation.

RIVIERA: To pass a new message to his generation, Calderon often shouts out Africa in his songs.

RIVIERA: Today, it seems like Latinos are embracing this side of their heritage, says Zayda Rivera, former editor-in-chief of Urban Latino magazine. She's now a columnist for the magazine and Web site DiversityInc.

Ms. ZAYDA RIVERA (Columnist, DiversityInc.): The funny thing about it is that I think music has such a big part in it, like Tego Calderon. A lot of people didn't even know that Puerto Ricans look like Tego do. And when he's there, he's so prideful of that. He's so prideful to say soy negro. If you really listen to his lyrics, he has such political messages. He talks about culture. He talks us bringing everything together, not always being at odds with each other. But at the same time, he's still got his fro. He's still got his dark skin, and he finds beauty in all of that.

RIVIERA: But activist Roland Roebuck says music is one of the few places where you do see this type of representation.

Mr. ROEBUCK: Afro descendents or Afro-Latinos are given space in three main areas: music, entertainment and sports. But if you try to identify Afro-descedents or Afro-Latinos in the areas of commerce or the judicial system, institution of higher learning, you will find a serious, serious absence.

RIVIERA: Besides being a rapper and a singer, the Nuyorican performer who goes by the name La Bruja is also an actress and a poet. Her most popular poem is called "I, too, Am Black."

LA BRUJA (Rapper, Singer, Actress, Poet): Although you may find me fair, with medium brown eyes and not-too-curly hair, of mixed heritage, too many to name, one thing was the same. We've all shared despair. Believe it or not, in fact, I, too, am black.

RIVIERA: Tego Calderon says he strongly admires many African-American leaders, so much so that he even named his son Malcolm X. He said that Afro-Latinos need to learn a lot from the African-American community in the United States.

Mr. CALDERON: (Through translator) This is a struggle. I think that at least in Puerto Rico, black people need to get together and demand our rights, just like Martin Luther King and the NAACP did. Because if you don't demand your rights, nothing happens. So I think it is time that we tell the politicians that we are a force, that we are many, and that we need to be given our place in society and that we demand our respect.

RIVIERA: With multiplatinum sales, Tego Calderon has certainly earned the respect of the marketplace. And with popularity comes attention. And with attention comes the possibility of change.