Accessibility links
Playing Five Beats To The Measure One of the appealing things about Lalo Schifrin's theme to Mission Impossible is that it's written in 5/4 time: five beats to the measure, instead of the more commonplace three or four. WNYC's Sara Fishko explores the atypical time signature's usage in music by Tchaikovsky, Dave Brubeck and more.

Playing Five Beats To The Measure

Playing Five Beats To The Measure 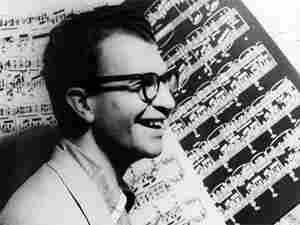 Lalo Schifrin's music for Mission Impossible is among the most celebrated themes in TV history, and one of the most appealing things about it, whether you're aware of it or not, is that it's in 5/4 time. Written for that iconic television series in the 1960's, the piece contains five beats to the measure, instead of the more typical three or four. (Count and you'll see — 1-2-3-4-5, 1-2-3-4-5.)

You would think by now, in our sophisticated world, 5/4 time would be commonplace. But in Western music, it's not — and it never was. In fact, pianist and writer Stuart Isacoff says that in the world of musical rhythms, things started out much more ambiguous than they have become.

"There was a time, if we look back to medieval music, where you have endless streams of notes that form vague contours," Isacoff says. "People tend to need some kind of an anchor to feel that there's some kind of organization happening rhythmically in the music."

Michael Beckerman, head of the music department at New York University, points to Tchaikovsky, who wanted to try something a little different when writing in the 1890s.

"You know, we have Tchaikovsky's example," Beckerman says. "The famous so-called 'waltz' from the Pathetique symphony, which is, of course, anything but a waltz."

Tchaikovsky wrote the second movement of his celebrated 6th symphony in 5 with a three–note figure, a triplet, which acts as a kind of diversionary tactic. But if you count it, you hear it: five, plain as day. Like other forms, time signatures and musical devices, 5/4 time works as a means of personal expression; Tchaikovsky made it sound like Tchaikovsky.

James Reese Europe, a Harlem musician working in the early 20th century, used it in a piece he wrote for a famous dance team of the era, Vernon and Irene Castle. Isachoff says the piece, titled "Castles Half and Half," is part fox trot, which is in 4, and part waltz, in 3.

When a restless Frederic Chopin began experimenting and improvising, he produced a classically Chopin-sounding sonata movement that can be counted in five.

But if there was a moment when the 5/4 time signature exploded into the public consciousness, it was certainly the Brubeck moment: Dave Brubeck's excursion into 5 made his name and his fortune, in the jazz hit "Take Five."

With "Take Five," Isachoff explains "we have 3 and 2, but it has a hotness to it. What we have in Brubeck is a complicated rhythm, and it's a rhythm that arises when you put 2 against 3. So that if you have one hand playing 2 and the other 3, that gives it a different swinging lilt, and therefore we end up with this pattern."

You would think that might have opened the floodgates for the use of 5. But you'd be wrong. Still, there's no question that it heightened the awareness of it, in a lovely and playful way. Beckerman says that some did follow suit.

"I remember when I was a kid there was a group called The Pentangle," Beckerman says. "They had a tune called 'Light Flight' and it made them stand out in some ways from other groups because of taking that kind of metrical chance."

But 5/4 is still an oddball thing that musicians and listeners love to collect and admire. Gustav Holst's piece, "Mars, Bringer of War," from The Planets is another well known example. These days it has even become fashionable to make a statement in 5 by adding a beat to something written in 4: Richard Rodgers' song "I Didn't Know What Time It Was" was reinterpreted by jazz pianist Brad Mehldau into a sort of lopsided jazz waltz — in 5/4 time.

In western music, Beckerman says, 5/4 time is less than a tradition, more than a gimmick. He cites bands including Radiohead, which have written songs that incorporate odd time signatures, such as "15 Step" from In Rainbows, which is in 5 as well.

"I think it's also an idea, a throwing down a gauntlet in certain places and styles," says Beckerman. "It was cool to do 5's and 7's, and I think that persists and lingers today. And it's sort of a way of making a certain kind of point about where you stand."

It's also a way of saying "I'm not going to get stuck in 3's and 4's like everybody else."