Accessibility links
Chick Corea On Piano Jazz Chick Corea has been a major force in music for nearly 40 years. His inventive improvisations and musical ideas have made him one of the most important figures in modern jazz. On this 1987 program, recorded at Corea's Madhatter studio, Marian McPartland plays the Fender Rhodes and Corea plays his KX5 synthesizer in "Crystal Silence." 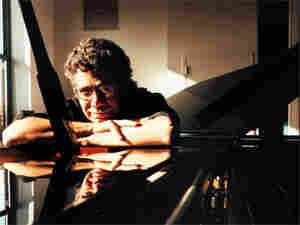 Chick Corea has performed with everyone from Miles Davis and Gary Burton to Anthony Braxton and Nancy Wilson. courtesy of the artist hide caption

Keyboard player and composer Chick Corea was born Armando Anthony Corea in Chelsea, Mass., on June 12, 1941. His father was a Dixieland trumpet player, so Corea began hearing jazz at an early age. By the time he was 4, Corea had begun studying the piano. He played regular jazz gigs in high school and, after graduating, moved to New York to study music at Columbia and Juilliard. School didn't suit him, but New York did, and Corea began taking gigs with artists such as Herbie Mann, Stan Getz and trumpeter Blue Mitchell, with whom he worked for three years.

In 1968, Corea joined Miles Davis' band, replacing Herbie Hancock. With Davis, Corea played electric piano on the groundbreaking recordings Bitches Brew and In a Silent Way. He left the group after two years to form his own avant-garde improvisational group, Circle, with Dave Holland, Barry Altschul and Anthony Braxton.

After three years in Circle, Corea formed a new group, Return to Forever, which blended fusion and Latin jazz. Corea reorganized the group two years later and reoriented it toward electronic jazz/rock fusion. When Return to Forever disbanded in 1975, Corea delved into a diverse series of projects, and also found himself collaborating with artists such as Herbie Hancock, Gary Burton, Joe Henderson, Freddie Hubbard, Hubert Laws, Chaka Khan and Nancy Wilson, among others. Corea returned to the fusion concept in the mid-1980s with his Elektric Band, and followed that with the formation the Akoustic Band.

In 1992, Corea realized a lifelong goal, along with his manager Ron Moss, by forming Stretch Records. The label, like its founder, remains committed to stretching musical boundaries and focusing more on freshness and creativity than on musical style. The genre-bending pianist and composer has continued and expanded on that tradition, working with various groups over the last decade -- including his New Trio with drummer Jeff Ballard and bassist Avishai Cohen, as well as a reunion of his Elektric Band for two recordings based on the science-fiction novels of L. Ron Hubbard. Corea's most recent work features a new collaboration with banjo virtuoso Bela Fleck. Their album, The Enchantment, won the 2007 Latin Grammy Award for Best Instrumental Album.

This Piano Jazz set with Corea was recorded at his L.A. studio, the Madhatter. This is one of the few episodes to feature McPartland on an electric keyboard. She joins Corea on the Fender Rhodes for a duet of Corea's famous tune, "Crystal Silence."