Accessibility links
Bill Charlap Trio: Live At The Village Vanguard One of today's most popular mainstream pianists, Charlap delights in selecting the most attractive standards of yesteryear and rendering them with tactful, warmly familiar gestures. 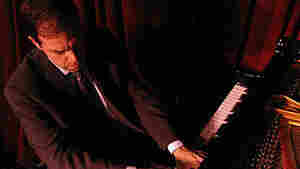 Jazz pianist Bill Charlap has a passion for interpretation. He especially delights in selecting the most attractive showtunes of yesteryear and rendering them with tactful, warmly familiar gestures. With his longtime cohorts Peter and Kenny Washington (no relation), Charlap returned to the Village Vanguard for a live set, broadcast on air by WBGO and online at NPR Music.

One of today's most celebrated mainstream pianists, Charlap is best known for his rich, sensitive readings of American popular songs. There was plenty of that familiarity in store, with charming readings of well-known jazz standards such as "Stardust," "The Way You Look Tonight" and "Sophisticated Lady." But Charlap picked plenty of more obscure gems, as well, including showtunes from the lesser-heard reserves of Harold Arlen and John Williams, and intricate compositions from undersung masters like Gigi Gryce and Lucky Thompson.

With his trio, which has played together for more than a decade, Charlap is capable of spinning storytelling solos at all speeds and styles. All were on display at the Vanguard: the bebop tempos, the ballad romances, the technical facility, the lyrical flourishes. As usual, Peter Washington delivered pure, resonant tones on bass, and Kenny Washington — whose reputation as a voracious record collector precedes him — contributed nifty but unobtrusive drum work.

Jazz standards run through Charlap's bloodlines. His mother is singer Sandy Stewart, and his father was Broadway composer Mark "Moose" Charlap, best known for scoring Peter Pan. (He has accompanied his mother several times on record.) Immersed in American songbook traditions from an early age, Bill Charlap made his name in the jazz world as both a sensitive accompanist and a strong straight-ahead performer: Early in his career, he was drafted into bands led by saxophone giants Gerry Mulligan and Phil Woods. Charlap has curated several jazz concert series in New York, and is musical director of the Blue Note 7, an all-star septet put together to commemorate the Blue Note record label's 70th anniversary in an upcoming 51-city, four-month-long U.S. tour.

In 1996, Charlap linked up with Peter Washington and Kenny Washington, who are both highly regarded sidemen in New York. As a trio, they've since recorded five albums together — two of which have been nominated for Grammy Awards — and appear often in New York and around the world. The Bill Charlap Trio is a popular draw at the Village Vanguard, where it regularly holds two-week engagements: Appropriately, it's also the scene of the group's latest recording.