Accessibility links
Of Montreal In Concert The Athens, Ga., band Of Montreal, led by frenetic frontman Kevin Barnes, has built a reputation on meticulously crafted, synth-driven psych-pop, with flamboyant production and gleeful sonic flourishes. Of Montreal brought this musical spectacle to Washington, D.C., for a full concert, webcast live at NPR.org.

Listen
Of Montreal In Concert 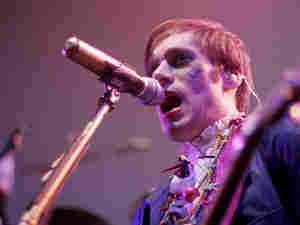 The Athens, Ga., psych-pop band Of Montreal performs at the 9:30 Club in Washington, D.C. Joel Didriksen for kingpinphoto.com hide caption

The Athens, Ga., band Of Montreal has been making some of the most wildly adventurous (if bizarre) music of the past decade. The group, led by frenetic frontman Kevin Barnes, has built a reputation on meticulously crafted, synth-driven psych-pop, with flamboyant production and gleeful sonic flourishes. Of Montreal brought this musical spectacle to Washington, D.C., for a full concert, recorded live at the 9:30 Club.

Since forming in the mid-'90s, Of Montreal has been one of the most consistent and prolific of the bands in the Elephant 6 collective — the widely adored cadre of neo-psychedelic groups that included Neutral Milk Hotel and Olivia Tremor Control. Releasing nearly an album a year, Of Montreal has continued to produce remarkably inspired, breathlessly unpredictable songs, while other groups in the collective have disbanded, gone on lengthy hiatuses or moved on to other projects.

On the band's latest CD, Skeletal Lamping, Of Montreal plunges listeners into the freakishly surreal world of Georgie Fruit, the "transsexual alter ego" of singer Kevin Barnes. (Think David Bowie as Ziggy Stardust.) Barnes first introduced Georgie Fruit on last year's Hissing Fauna, Are You The Destroyer? On Skeletal Lamping, Barnes digs deeper into Georgie Fruit's imaginary world, with a burst of schizophrenic narratives and seductive, shape-shifting noise-pop. It's a strange but infectious sound, which Barnes says he developed by borrowing from the past.

"It's almost inevitable," Barnes tells NPR's Liane Hansen. "You have to sort of lift from other people. But as long as you do it in your own slightly original way, it's okay. So, I mean, I take from everybody, from Fela Kuti to Brian Eno, you know, from Prince to Queen. So I think it's okay, as long as you sort of blend it in an interesting way that's slightly original. I don't think that to be completely original is that important."

Skeletal Lamping is due out Oct. 21. In an attempt to reconnect listeners with something tangible and more artful, the label and Of Montreal are releasing the album in seven different formats. Instead of receiving a downloadable file only, or a flat CD, fans can get Skeletal Lamping packaged with a tote bag, T-shirt, button set, paper lantern or set of wall decals. Each of the formats will include both the unique packaging and a digital, downloadable version of the album. Band members say they hope the move helps bring listeners back to record stores.

Album
Hissing Fauna, Are You the Destroyer?
Artist
Of Montreal
Label
Polyvinyl