Accessibility links
Chocolate Milkshakes On The Brain Scientists say they've discovered one reason overweight people eat more than they need to — and find it so hard to stop. Their findings, reported in the journal Science, stem from some high-tech brain scans, fancy genetic tests — and chocolate milkshakes.

Listen
Chocolate Milkshakes On The Brain 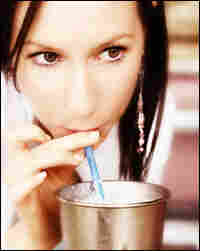 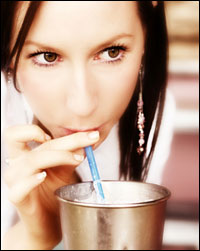 A woman savors a milkshake.

Scientists say they've discovered one reason overweight people eat more than they need to — and find it so hard to stop: Obese people don't appear to get as much pleasure as they expect from tasty treats.

The report, published in the Oct. 17 issue of the journal Science, involves some high-tech brain scans, some fancy genetic tests --and some chocolate milkshakes.

"There are very few things that excite the brain as much as chocolate," says Eric Stice of the Oregon Research Institute and the University of Oregon.

That makes chocolate just the thing to shine a light on the brain's "reward system" — the circuits that light up when people eat or drink something that tastes good. Chocolate milkshakes are ideal for the purpose, because the yummy flavor can be squirted through a straw while volunteers' heads are clamped into an MRI scanner. That yields images of brain blood flow, identifying which parts of the brain are responding to a stimulus — in this case, the taste of the milkshake.

Stice and his colleagues looked at how the brains of 77 young women responded to the milkshakes. Some women were lean, some obese, and some had a gene variant that makes them less sensitive to dopamine, a chemical central to the pleasure response. So they don't get as much pleasure out of food as others.

About 30 percent of people are thought to have the gene variant. And researchers know from previous research that they have about 40 percent fewer receptors that register the presence of dopamine in the brain.

• When obese women ate food, they had a "blunted" dopamine response in the brain's reward center compared with lean people.

• This low response was amplified among women who had the gene variant that results in fewer dopamine receptors.

• A year after the brain scans, women with the gene variant had put on more weight than women without the gene.

These findings run counter to the popular notion that overweight people love to eat and get more pleasure than others out of rich treats like ice cream. The Oregon researchers say that idea is only half true.

"If you look at the brain response when people are about to get the milkshake, obese individuals show greater activation of the reward circuitry, not less," Stice says. "So, ironically, they expect more reward but seem to experience less."

Kent Berridge of the University of Michigan studies how the brain responds to food — and the anticipation of food. He calls the new research exciting because it helps explain the difference between "wanting" and "liking."

By "wanting," Berridge means craving something: the anticipation of something delicious. "Liking" refers to the pleasure that comes from actually tasting it.

The Oregon research suggests how dopamine can play both roles. It increases craving, or the anticipation of eating something good, in obese people. But it blunts their enjoyment of eating it.

Stice sees direct parallels with other addictions, such as smoking and illicit drugs. He thinks obese people overeat to compensate for the mismatch they experience between their strong cravings and the reduced enjoyment they get.

The best way to avoid this vicious cycle, he thinks, is to develop healthy eating habits — before pleasure responses get blunted by overeating.

"Don't get your body used to eating really high-fat, high-sugar foods, because it'll be really hard to stop," Stice says.

He thinks it's best to do this when you're young. If you're already obese, the new research may have other implications.

If you're trying to give up chocolate, for instance, Stice thinks that "eating just a little bit of chocolate every day is not the way to go. It's better to stop eating chocolate and say, 'That's the healthy improvement I'm going to make in my diet.' And after a month or maybe six weeks, your craving for chocolate will finally go down and stay down."

Looking For Solutions To Childhood Obesity June 19, 2008
Battling Back From A Food Addiction Sept. 18, 2008