Accessibility links
Al Grey: The Last Big Time Plunger Trombonist Al Grey was highly regarded as "the last of the big time plungers" thanks to his skill at using a plumber's plunger to manipulate tones coming from the bell of his trombone. Grey rose to prominence as a soloist and gifted accompanist to singers, developing a unique style playing in the bands of Lionel Hampton and Count Basie. 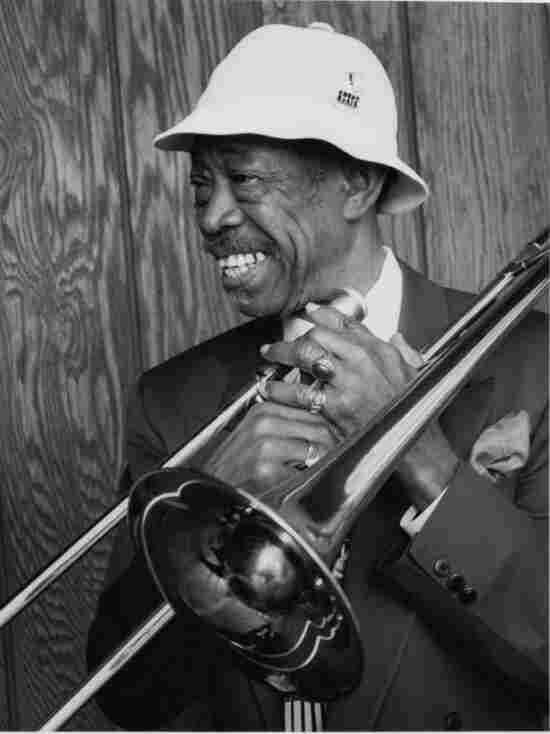 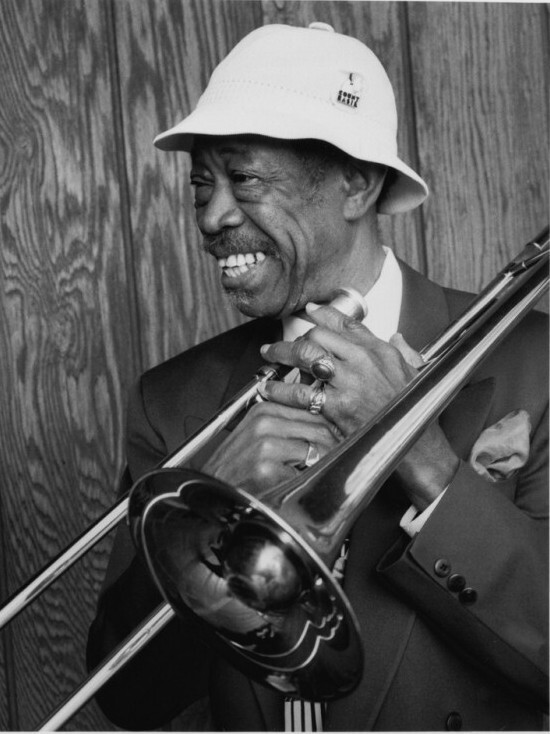 Trombonist Al Grey was famous as "the last of the big time plungers," for his mastery at using a plumber's plunger to manipulate the color of his instrument. The result was a soulful quality that sounds as if he's singing the blues.

Grey rose to prominence as a soloist and gifted accompanist to singers, particularly on bluesy numbers. His unique style developed over years spent playing with many great bands — such as those of Lionel Hampton and Count Basie, — and his illustrious career spans some of the great periods in the history of jazz, including swing and bebop.

Grey came from a musical family. His father, a multi-faceted musician himself, was determined to have young Al learn to play a brass instrument. As a child, Grey often resented being forced to practice, but soon realized its benefits by landing well-paying jobs. Later, while playing in the Navy band during World War II, Grey met trumpeter Clark Terry. The two became lifelong friends and would eventually play in various bands together.

Grey joined Benny Carter's band right out of the Navy in 1946. Carter's innovative arrangements and driving swing served as an education for Grey. He also played with Jimmie Lunceford before joining Lionel Hampton's big band. It was with Hampton that he began experimenting with the plunger. Hampton noticed the trombonist's facility with the technique as Grey accompanied vocalist Sonny Parker one night, and insisted that Grey keep it as a permanent feature of the band.

Dan Morgenstern of the Institute for Jazz Studies notes that jazz musicians often try to squeeze new sounds out of their instruments. This started as far back as King Oliver in New Orleans, who used to hold a child's sand pail in the bell of his trumpet. The plunger became recognized as a very effective device for such purposes. Trombonist Sam Nanton of Duke Ellington's band was recognized as a master plunger, but he died in 1947 without revealing the secrets to his own technique. From that point, Grey became the heir to the plunger tradition.

After several years with Hampton, Grey played a year-long stint with Dizzy Gillespie's band, learning the language of bebop, and then joined Count Basie's orchestra in 1957. Basie's emphasis was on simplicity, and he discouraged some of the fast-playing bebop elements Grey had recently developed.

During the recording of "Making Whoopie," Basie cautioned Grey against overplaying, saying "my goodness don't try to play all you know in one number." But Grey's individual style meshed perfectly with Basie's orchestra, and "Making Whoopie" would become the trombonist's signature piece.

Grey excelled at mixing little blues licks in among the phrases of singers with perfect timing and sensitivity. He honed this unique ability during his early years with the Basie orchestra. Before long, his colorful technique as an accompanist was highly prized among famous singers, including Lena Horne, Tony Bennett, Frank Sinatra and Ella Fitzgerald.

Eventually, Grey grew restless with the demands of playing in a large ensemble and left Basie's group to experiment with his solo style.

Grey also developed a passion for teaching. He created a jazz summer camp in his hometown of Pottstown, Pa., where he recruited other jazz greats in to help him teach swing to high school students. Among them were drummer Max Roach, saxophonist Jimmy Heath and pianist Billy Taylor. Grey's students included accomplished professionals, such as Wynton and Delafayo Marsalis, whom he taught his famous plunger techniques.

According to fellow Basie alumnus and tenor saxophonist Frank Foster, Grey made an immense contribution to the jazz trombone. "He played a great role in changing the conceptualization of the trombone as an instrument in jazz," said Foster, adding that Grey revived and elaborated upon the plunger technique "and influenced lots of young players to get into it." Fortunately, Grey understood the importance of passing his secrets on to younger trombonists, ensuring that this craft will maintain its place in jazz. Of Grey's importance to plunging, Morgenstern says, "Thanks to Al, it's not going to be a lost art." Grey died on March 24, 2000.