Accessibility links
Anat Cohen: Live At The Village Vanguard Reedwoman Anat Cohen totes a clarinet and two saxophones, and plays them in modern jazz, traditional revues and every Afro-Latin hybrid imaginable. She'll do all that and more in this live broadcast. 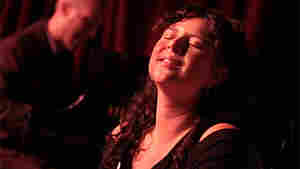 It's not quite enough to say that Anat Cohen has many interests in jazz. To start, she plays three instruments: clarinet and both soprano and tenor saxes. Then she plays them in various and sundry settings, including modern jazz, traditional ensembles, classical music and every type of Afro-Latin hybrid imaginable: Argentinian, Brazilian, pan-Caribbean and so on. And when Anat Cohen plays with her quartet, she funnels all of her interests into spirited original compositions. That group visited New York's Village Vanguard for a live performance, broadcast on air by WBGO and online at NPR Music.

As with her well-received new album Notes From the Village, Cohen stuck largely to her clarinet, which sounded alternately dark and warm or playful and sprightly. The quartet led off with a slew of 20th-century touchstones, all reworked as melodic modern jazz: Fats Waller's "Jitterbug Waltz," Ernesto Lecuona's "Siboney," Sam Cooke's "A Change Is Gonna Come." But, as always with Cohen, variety was the order of the night. She brought out both saxes as the evening went on, as the quartet referenced everything from African thumb piano to danceable rock grooves. With her were longtime collaborator Jason Lindner on piano (his paper in the strings creates the effect on "Washington Square Park"), spacious-sounding bassist Joe Martin and drummer Daniel Freedman, who seemed to serve up a different groove at every turn.

Born and raised in Israel, Cohen learned American jazz styles in Tel Aviv conservatories and high schools; she later fulfilled her military service mandate by playing tenor saxophone in the Israeli Air Force band. In 1996, she came to Boston to study at the esteemed Berklee College of Music; by the time she made the permanent move to New York, she was already hooked on the many different types of Latin rhythms she's since brought to prominence.

Over the last several years, Cohen's star has risen sharply in the jazz world. No doubt this has much to do with her prolific recorded output of late: In the last four years, she's released four albums as a leader, plus two records as a member of Choro Ensemble (dedicated to Brazilian music), a CD with the young collective Waverly Seven, and the second album from 3 Cohens — the Cohen siblings' band. Critics have remarked on both her diversity of styles and her proficiency in all of them.

"Each kind of music has so many different sides and elements that you can really go bigger and groovy and heavy, or delicate and more classical," Cohen told NPR's Liane Hansen in 2007. "And I'm not really sure what will be the next one. If it will be a crazy or delicate [project], I'll let you know as soon as I figure it out."

Cohen's new recording, Notes From the Village, captures her quartet (and guests) in a mix of fetching originals and keenly reworked classics. As for the CD's title, it alludes to Cohen's residence in New York's Greenwich Village — a short walk away from the Village Vanguard, where she made her debut in the summer of 2007.