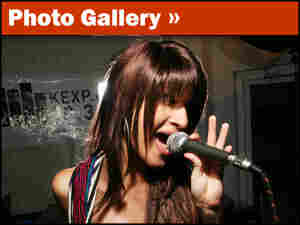 Even in the morning hours, Hercules and Love Affair got the fans moving at the Gibson Showroom. Doron Gild hide caption

Hercules & Love Affair didn't cut any corners in its first-ever live performance on radio. With a full horn section, two distinct vocalists, percussionists, a bassist and mastermind Andrew Butler crammed into the Gibson Showroom in New York City, the disco group brought uproarious applause from the sizable crowd dancing behind the glass.

It was quite a feat to get the whole Hercules & Love Affair crew on the air, especially for an early-morning show. Butler admitted in the interview with KEXP's Cheryl Waters that the band doesn't even rehearse before 6 p.m. on most nights. But even at 10 a.m., the band sported funky, Stevie Wonder-style keyboards over four-on-the-floor beats and a lively horn section to get people moving. The set even included a new song, "Wonder Woman."