Accessibility links
York Voters Untangle Rhetoric On Race Who is Joe Six-Pack? Is he a white guy or a brown-skinned immigrant? What does "Country First" mean? A group of 15 voters — black, white and brown — from York, Pa., help decode the language and imagery used by the campaigns.

This is the third report in a series of conversations with voters in York, Pa., about race and its role in the 2008 presidential election. Steve Inskeep and Michele Norris first spoke with 13 voters in September. This time around, they added two more to the group. They plan to meet again with the voters — a mix of white, black and brown — from this swing state after the election. 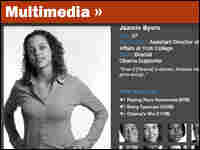 Interactive: Meet the York, Pa. Voters In Our Series
NPR

Steve Inskeep finds that blacks seem to speak more comfortably about race than whites. He asks: "Whether we are white or black, do we really know ourselves?" 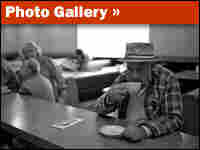 When you hear the terms "Joe Six-Pack" or "Country First" — terms used frequently in the 2008 presidential election — what comes to mind? Is Joe a white guy, or a brown-skinned immigrant? Is John McCain's slogan "Country First" a challenge to Barack Obama's patriotism? Are Obama family photos that feature his white relatives meant to reassure white voters?

NPR assembled a group of 15 voters from York, Pa., to help decode the language and imagery used by the presidential and vice presidential nominees. Not surprisingly, the voters — who were black, white, Latino and South Asian — had many different answers to questions about the complexities of language, race and politics.

But before they could decode the language of the campaigns, they turned to their daily lives.

Gray Areas Between Black And White

Jazmin Byers, a woman with curly hair and blue eyes, is half black and half white. Does she label herself?

"Sometimes you're filling out applications for college, or just for a job, and you wonder, 'How do I want to be identified or perceived?' And sometimes you wonder, 'Would it benefit me to select African-American only?' Well, then, that's not really, truly who I am," she says. "So a lot of times, I find myself selecting other. To some degree, you get to make a choice."

It brings to mind Obama's choices. If asked directly, the Democrat says he's black. Some of his ads display his white mother and grandparents.

Maribel Burgos, who's Puerto Rican, says she understands, because it's her world, too.

"Well, I'm white in color, but I'm Latina in heart and blood," Burgos says. "On paper, I am Latina, but when I walk into a [work] place, they automatically say, 'She looks white. She's one of us.' And I get hired, so I use it both ways. It's a sad world, but it is reality."

Margie Orr, who's black, says for Obama, it all boils down to skin coloring.

"I really don't think that Barack Obama would have gotten as far as he has if his skin coloring was dark," Orr says. She plans to vote for Obama in November.

Sarah Yacoviello, who's white and plans to vote for McCain, wonders why. "Is it because a lighter-skinned black man looks more white, looks more Caucasian?" she asks.

Weary says: "When you talk about a Barack Obama who they show you these pictures of his family, what it's basically saying to the American people is, 'You don't have to worry about him doing these things that you think he might do that comes from this culture, this African-American culture.' "

Some people of color say they have a complicated relationship to their country. Orr, for example, says she's proud of America, but she's not the kind of person who hangs a flag outside her door.

"Maybe it's because when the United States shows me that I'm a total equal person, then maybe I will put a flag out on my property," she says.

As Orr suggests, America has sometimes excluded African-Americans. And now a black man is seeking to lead America.

With that in mind, the group considered some campaign language about America and patriotism.

Jeff Lobach is a white lawyer who supports McCain. Lobach says that with his "Country First" slogan, the Republican nominee is trying to remind voters of the 5 1/2 years he spent as a Vietnam prisoner of war, as well as his history of bipartisanship. But Lobach also thinks McCain is raising questions about whether his opponent puts country first.

"I do think that's the intention, and I'm sure I'm not the only one who gets that sense," Lobach says.

Leah Moreland, who's white and supports McCain, adds, "I think McCain is much more patriotic than Barack Obama."

You And Me And We

Republican vice presidential nominee Sarah Palin recently described Obama as "not a man who sees America as you and I see America."

"We see America as a force for good in this world. We see an America of exceptionalism," Palin said.

That got Charlotte Bergdoll wondering whom Palin was addressing. "I don't like that word — 'we,' " she says. Bergdoll is white and has not yet decided for whom she will vote.

The York voters then dissected Palin's claim that she is the voice for the "Joe Six-Packs out there"; they wondered whom, exactly, she meant.

Mohammad Khan, an immigrant from Bangladesh, owns a diner with a giant American flag painted on the building. "Joe Six-Pack is people just like me — work every day, pay their taxes. But she is not talking for me," Khan says.

Others said that Joe Six-Pack is a white man.

"When I think Joe Six-Pack, I think of the hunter and his gun and his dog, and that's a definite white man out in the countryside," says Blanche Hake, a retired teacher who is white.

For Orr, Joe Six-Pack is not only white, he's a kind of savior.

"The others are lazy. They don't work as hard," Orr says. "So that's where the Joe Six-Pack comes in. He's a hard-working white man."