Accessibility links
The Glamorous Life Of Daniel Hope The violinist has spent his life stretching the definition of classical musician. Here he describes his introduction to the violin and his collection of instruments.

Daniel Hope And The Police Play 'Message In A Bottle'

On Rehearsing With The Beaux Arts Trio

On Improvisation In Classical Music 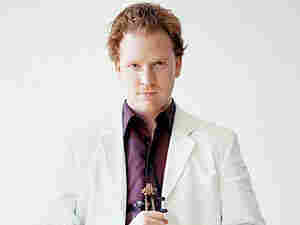 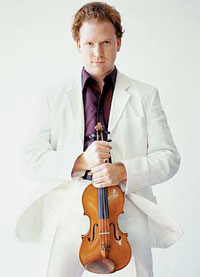 Daniel Hope leads a glamorous life — for a classical musician, anyway. At 35, he carries a 239-year-old violin and an iPhone. He plays concertos with the world's top orchestras and jams with musical friends such as Stewart Copeland of The Police. And, for the past six years, Hope was the violinist in the legendary Beaux Arts Trio. The South African-born Hope is equally comfortable as a soloist with an orchestra, in more intimate chamber ensembles and while sitting cross-legged across from a sitar player.

After his father published poems critical of apartheid, the Hope family left South Africa when Daniel was just an infant. When the family landed in England, strapped for cash, his mother took action.

"My mother decided to go all out, and she went to a very, very exclusive job agency," Hope says. "There were two jobs going: The first was secretary to the Archbishop of Canterbury, and the other was secretary to Yehudi Menuhin, the violinist." She took the latter.

From the time he was an infant until the age of 7, Hope spent almost every day in Menuhin's house, surrounded by extraordinary musical figures such as Stephane Grappelli, Mstislav Rostropovich and Ravi Shankar.

And these were just the guests who came to tea.

Hope recalls his time in boarding school, where he rebelled against the strict musical curriculum.

"I was supposed to be playing Bach, and all I wanted to do was play the Mendelssohn violin concerto," Hope says. "But all my teachers said I was not good enough to do that, and they were right, but it didn't stop me. So I locked myself in the bathroom, and I put my music stand in the bathtub, took out the music, and I attempted the Mendelssohn concerto. And it must have sounded as if somebody was strangling several cats, but it was the most wonderful feeling of elation to me, to have that music running through my veins."

Hope was caught in the act, and his parents were called. Their reaction to the offense was shock: He was removed from the school and given a new violin instructor, whose first demand of his student was that he learn the Mendelssohn concerto first.

Hope opens his violin case, which he calls "a rather sort of space-aged case," and reveals an instrument "wrapped in all sorts of lucky charms." The violin he pulls out was made in 1769 by Gennaro Gagliano. It once belonged to Yehudi Menuhin.

"I was able to purchase this from him," Hope says. "I started buying it when I was 15, and about 15 years later, it finally belonged to me."

Hope says that its range is his favorite aspect of the instrument: "One can go from the quietest, quietest pianissimo to huge explosions of forte."

"One day, I was just sitting at home, looking out of the window, and I happened to catch my music stand, and on my music stand was 'Tzigane' by Maurice Ravel," Hope says. "And it said 'Rhapsody for Violin and Piano, or Piano Lutheal,' and I said, 'What on earth is a piano lutheal?' So I went back to my desk, and I Googled the word 'lutheal." This was an instrument that Ravel had created."

Hope found a piano technician capable of building the instrument, which he says is a cross between a typewriter and an organ that attaches to the strings of a piano. The result, he says, is "an amazing sound world."

"You have like a cembalon sound, the gypsy instrument; you have a harp sound; you have a kind of fortepiano/cembalo sound," he says. "So I decided, 'We have to record this.' "

Playing With The Sitar

The violin was not the only gift that Hope received from Menuhin; he also received the notes from his sessions with sitar legend Ravi Shankar.

Hope himself began playing with another sitar player, Gaurav Mazumdar, who was recommended to him though Shankar himself.

"When we sat together on the floor, cross-legged, as is the fashion with Indian music," Hope says, "those two instruments kind of intertwined. You realize how close those instruments really are."

"There are so many wonderful, wonderful musicians in the world, I cannot possibly make a distinction between the fact that they might play classical music, or bluegrass, or Irish traditional, or Indian music," he says. "And if one is open enough to meet them halfway, that's when it gets really interesting."