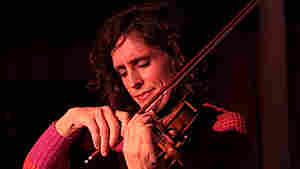 In recent years, Jenny Scheinman has found her own voice, in both the figurative and literal sense: Earlier this year, she released her debut as a country singer. But in the broader sense, Scheinman — violinist, composer and, yes, vocalist — has been hard at work developing a uniquely rich, earthy approach to improvisation. In countless configurations in and around New York, and on a sparkling new instrumental album, she applies her broad palette of American music through the filters of an adventurous jazz aesthetic. It was on full display with her quartet, featuring standout pianist Jason Moran, at the Village Vanguard, in a concert broadcast live on air by WBGO and live online here at NPR Music.

Scheinman dazzled, but the true stars of the night were her uniquely-scored compositions. Pastoral, folky and rousing in various combinations, the songs coaxed a host of personalities out of only four musicians. Warm, elegiac ballads ("Sleeping In The Aquifer," "Born Into This") mixed with buzzing, forward-pressing material ("American Dipper [Male Variation]," "Bray"). There was good humor in abundance, overtones of Aaron Copland, and a generous helping of active, backbeat-heavy grooves. One song even invoked the firebrand saxophonist Albert Ayler, a "great melodicist" in Scheinman's words.

In this distinctly modern jazz setting, Scheinman proved to be both a graceful violinist and a robust fiddler. She took smart, compact solos, integrated well into her thoughtful compositions. Meanwhile, the highly-touted pianist Jason Moran played a remarkable sideman, using vamps to develop tunes before beginning potent flights of fancy. Bassist Greg Cohen, who has spent many hours with both Ornette Coleman and Tom Waits, provided a stylish and necessary pivot for the group. And drummer Rudy Royston supplied subtly funky grooves, implying but never overstating forward motion.

Raised in remote rural California, Scheinman grew up singing folk songs with her family and studying both piano and violin. But it was only after she graduated from college (with an English degree) that she began her full-time pursuit of music, first in the San Francisco Bay area and then, starting in 1999, in New York City. Gigs with guitarist Bill Frisell helped put her on the city's jazz landscape, and for some time, she both backed up Norah Jones and fronted a country outfit that Jones played in. (Other pop-arranging credentials include work with Lou Reed, Bono and Lucinda Williams.)

Meanwhile, Scheinman continues to contribute to jazz ensembles all over the stylistic map. She's often heard honing her material in myriad ensembles throughout the borough of Brooklyn, where she remains at the heart of a vibrant, style-agnostic jazz community. And, while the majority of her work comes as a session player and arranger, this year's dual releases are the sixth and seventh albums she's released under her own name in 10 years. Her new instrumental record, Crossing the Field, is her most ambitious yet, featuring a jazz group often backed by a string orchestra.

Scheinman has appeared at the Village Vanguard several times, both as a member of Bill Frisell's groups and in a trio with Jason Moran and drummer Paul Motian. But this residency, which doubles as an unofficial release party for Crossing the Field, will mark one of her highest-profile appearances anywhere.