Accessibility links
Kitchen Window: Coaxing The Black Walnut Out Of Its Shell Black walnuts are tough to process and have an earthy flavor that doesn't appeal to everyone. But fans of America's native nut can showcase its natural richness in distinctive dishes, from baked sweets to savory sauces.

Coaxing The Black Walnut Out Of Its Shell

Coaxing The Black Walnut Out Of Its Shell 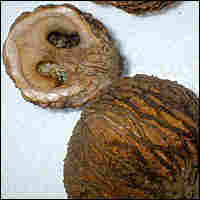 Black walnuts offer a signature taste of fall. They're native to 15 or so states from Nebraska to Virginia and from Michigan to Mississippi. Mike Petrucelli for NPR hide caption 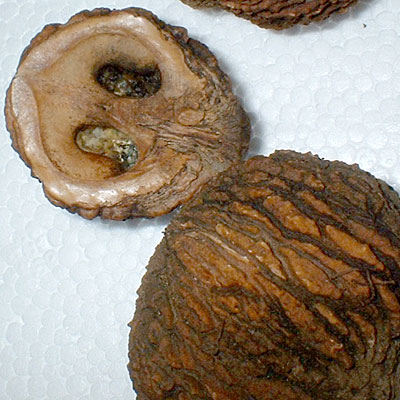 Black walnuts offer a signature taste of fall. They're native to 15 or so states from Nebraska to Virginia and from Michigan to Mississippi.

My wife bit into a coffee cake at work the other day, expecting the typical office potluck flavor. She was surprised, she said, to taste a distinctive note reminding her of her childhood backyard in northwest Indiana.

It's a taste that brings back all kinds of memories for native Midwesterners like her everywhere: black walnuts.

She was excited. I stared blankly. Black walnuts? People really eat those green balls that are underfoot all fall?

Of course they do, but a rum cake-eating Italian kid from southern Connecticut (that would be me) doesn't know that. The trees don't grow there.

A couple of days later, she came home with a bag of walnuts her supervisor had harvested from her yard and cracked one for me to try. I didn't have to try many. These things announce themselves in a big way.

If you have never had a black walnut, you probably right now have the flavor of an English walnut, intensified slightly, on your mind's palate.

Black walnuts are the un-walnut. They taste of the earth: musty, bittersweet and thick. They come storming into your taste buds. If they had a soundtrack, it'd be "The Imperial March (Darth Vader's Theme)."

That's their appeal. Black walnuts taste like something you worked hard to get — like you did a whole season of farming in just a couple of hours.

Black walnuts taste like something you worked hard to get — like you did a whole season of farming in just a couple of hours.

But they are divisive. A pastry chef I know gave them a try and couldn't get past the "oily, unripe aftertaste." I admit, they still have a raw taste even when toasted, which mellows them some.

People often assume that just because something is edible, hunter-gatherers in our prehistoric past automatically ate it no matter how hard it was to eat. Not true for black walnuts, which are native to 15 or so states from Nebraska to Virginia and from Michigan to Mississippi.

Mark Schurr, an associate professor of anthropology at the University of Notre Dame, says that because black walnuts were much harder to process than, say, hickory nuts or acorns, they were often left alone. Schurr, who also studies prehistoric nutrition, adds that black walnuts were on the ground in the fall, when more easily harvested foods were abundant.

Black walnut meats are much smaller than other nuts and are difficult to pick out of the shell, which grows into the meat more than does the shell of English walnuts (which are actually from eastern Europe and Asia). That's why you only see black walnuts chopped and never in more presentable-looking halves.

Also, black walnut meats are about two-thirds oil. The oil contains the antioxidant alpha-linolenic acid, which is one of the celebrated omega-3s we always hear about, according to Peter Pribis, assistant professor of nutrition at Andrews University in Berrien Springs, Mich. Pribis is studying whether English walnuts, which are similarly endowed, can improve cognition. (If they can, then after all I've eaten for this story, I should be able to move objects with my mind.)

Mike Petrucelli is the Food and Home editor at The South Bend Tribune and has eaten more black walnuts in the past month than most people eat in their entire lives. He lives in Plymouth, Ind., with his wife and two children, who silently (and not so silently) put up with whatever new food, recipe or technique he happens to be writing about.

One reason people let black walnuts lie is that they are literally a tough nut to crack. Aside from using a huller, people find other ways to break them: a rock (hurt hands; swear a lot); a hammer (drill hole in board; whack nut through hole; make black, inky mess); a car (sweet). One guy I work with put them in a cement mixer with rocks for an hour. It made a mess, but it worked well.

Once the nuts are hulled, they need to dry for a few weeks before cracking. A rule of thumb is to leave them until you can hear the nut rattle when you shake it.

That's a lot of work, but people do it. And there's a good reason for it. Ask Midwesterners. They'll tell you that nobody made a better "(Name a state here) Black Walnut Cake" than their grandma.

That's the beauty of a native food. Everyone claims it as his or her own. Officially, the eastern, or American, black walnut is the state tree nut of Missouri. That's because most nuts that people pick up off the ground by the truck- and trailerful (seriously, a guy here showed up with a trailer full of black walnuts in buckets, barrels, bags and the gutted metal case of a Sears battery charger) are sent to Missouri's Hammons Products Co. Hammons has been processing walnuts since the 1940s and handles about all the black walnuts you see in stores.

If you live in one of the states where black walnuts grow, you can probably get local nuts at a farmers market. Load up: They keep for a year in refrigeration and up to two years in the freezer. If you live where the trees don't grow, it's easy enough this time of year to find black walnuts under the Hammons label at supermarket chains including Kroger and Wal-Mart. At other times of year, black walnuts can be found under stores' private labels or other national brand names. Either way, the nuts most likely came from Hammons.

I'm still working out whether I like black walnut. To a lot of people, it's a signature taste of fall, and around here, people put the nuts in cakes, cookies and stuffing, or they buy black walnut ice cream from the Amish. But like them or not, if you use them, your dish will get noticed. Just be sure to warn the New Englanders first.

This recipe is adapted from one by JohnPaul VerHage, executive chef, Tabor Hill Winery and Restaurant, Buchanan, Mich. It goes well with a dry Riesling. 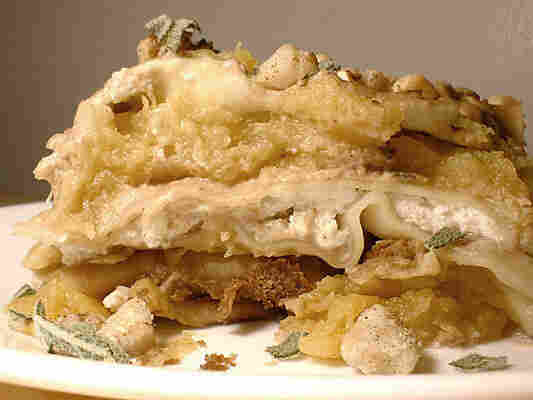 Cut squash in half and remove seeds. Place on baking sheet, cut side down, in about 1/8- to 1/4-inch water. Roast until tender, about 40 minutes or until a skewer inserted in flesh meets no resistance. Let cool, then scrape pulp from skins.

Saute garlic and onion in oil until tender, then stir in squash, stirring until smooth, mashing with a fork or potato masher, if necessary. Add chopped sage.

For the sauce, simmer nuts and water or stock until nuts become tender. Puree in a blender until mixture has a smooth texture. Add more warm water, if necessary, to achieve the consistency of an Alfredo sauce. Season with salt and pepper.

Garnish with chopped nuts and sage. Let cool for 15 minutes. Cut and serve.

This recipe is from Starting With Ingredients by Aliza Green (Running Press, 2006). The dough freezes well, so divide it in two, place half in a heavy plastic zip-top freezer bag, and freeze for up to 3 months. 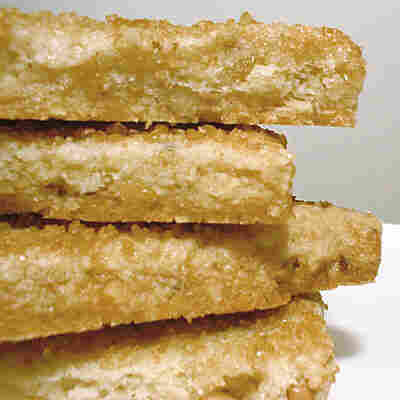 Combine the flour, cornstarch, sugar, walnuts and black walnuts. Cut in the butter as if making pastry dough, mixing until the mixture looks like oatmeal. Sprinkle in the vanilla and the cream and beat again briefly, just until the dough comes together in a ball.

Chill the dough until firm but still malleable, about 30 minutes. Roll out to slightly less than 1/2-inch thick.

Cut into diamond shapes and sprinkle with crystallized sugar, pressing lightly with your hands so that the sugar adheres. Arrange on parchment paper-lined baking pans. Bake for 20 minutes or until just beginning to color. Remove from the oven and cool before serving. Store in an airtight container at room temperature for 4 to 5 days.

This recipe is from The Silver Palate Cookbook, by Julee Rosso and Sheila Lukins (Workman, 1982). 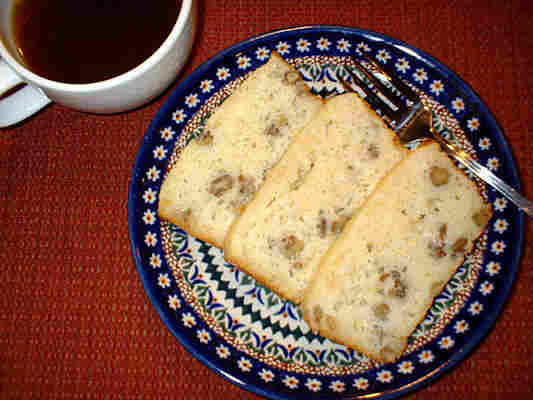 Butter two loaf pans (9-by-3 inches) with 3 tablespoons of the butter.

In a mixing bowl, cream together remaining butter and 1 cup of the sugar. Beat in the egg yolks, one at a time, then stir in 1/3 cup of the lemon juice and the grated lemon rind.

In another bowl, beat the egg whites and pinch of salt together until stiff but not dry. Fold beaten egg whites and black walnuts gently into the batter.

Pour batter into the prepared pans. Bake on the middle oven rack for 40 to 45 minutes or until a cake tester inserted in the center of a loaf comes out clean.

Cool bread slightly, remove from pans, then cool completely on a rack.

Drizzle the lemon syrup over the loaves and let them cool completely before wrapping.