Accessibility links
Milt Hinton: The Ultimate Timekeeper Bassist Milt Hinton, known as the "Judge," was considered to be the ultimate timekeeper. With his buoyant tempos and fat, booming sound, Hinton provided the rhythmic foundation for many jazz greats. 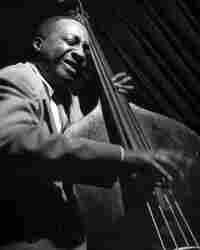 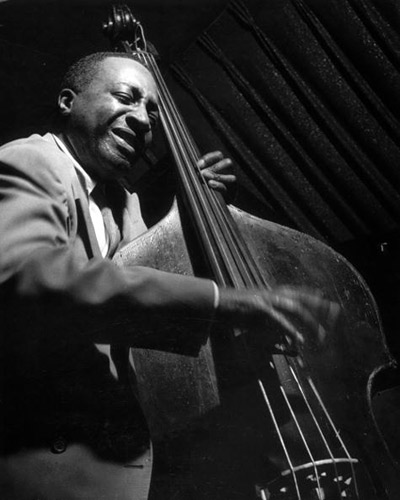 Bassist Milt Hinton provided the rhythmic foundation for many jazz greats with his buoyant tempos and fat booming sound.

For more than seventy years, Milt Hinton lit up the bandstand with his warm personality while laying down infectious, rhythmic bass lines. Those who played with Hinton affectionately referred to him as "the Judge," because he was considered the ultimate timekeeper. As trumpeter Clark Terry once put it, "When you work with the Judge, you know you're gonna get some time."

Hinton provided the rhythmic foundation for many of jazz's greatest artists, including Louis Armstrong, Dizzy Gillespie, Count Basie and Cab Calloway. Though not a big man, his presence always loomed large, as his buoyant tempos and fat, booming sound left leave an imprint on every performance. Hinton took his supporting role as an accompanist in full stride, noting, "It's necessary that you have enough humility to make somebody else sound good."

Starting in the 1950's, Hinton became the most recorded bassist in New York City. He worked hundreds of sessions with some of the biggest names in jazz, soul and pop music, including Sam Cooke, Billie Holiday, Aretha Franklin and Bobby Darin. Together with pianist Hank Jones and drummer Osie Johnson, Hinton formed The New York Rhythm Section, an ensemble famous for bringing out the best in every performer. The trio had an uncanny ability to enhance any arrangement in the studio, and their innovative harmonies propelled Darin's rendition of "Mack the Knife" to the top of the charts.

Hinton's road to success began in Vicksburg, Miss., at a time when lack of opportunity and outright oppression forced many Southern black families to seek a better life in the North. In 1919, at age nine, young Milt and his grandmother moved to Chicago to join his mother, Hilda. On Chicagos South Side, Hilda rehearsed her church choir and taught piano lessons in the household. She bought him a violin at age thirteen, paid for him to take lessons and enrolled him in the National Black Music Association. Later, Hinton attended the Wendell Phillips High School, where he learned to play a variety of instruments.

The benefits of rigorous musical training were realized when Hinton was hired by violinist and bandleader Eddie South at age 21. Hinton said that South taught him how to play with more feeling, and Milt got his first recording experience with South's band. Hinton had just returned to Chicago, after finishing a six month stint with South in Hollywood, when Cab Calloway asked him to join his famous band.

Hinton had to fill the big shoes (and oversized band uniform) of former Calloway bassist Al Morgan, who stood 6 feet 6 inches tall. Hinton recalls his anxiety at first playing Morgans famous bass solo on "Reefer Man." Milt overcompensated, playing every imaginable note, and fondly recalls "the guys [in the band] were laughing...and Cab Calloway was holding his side. When the band came in, I was scared to death!"

Hinton solidified his reputation during 16 years with Calloway's band. He became the undisputed king of the "slap bass" technique, where a bassist plucks the strings out from the fingerboard and allows them to snap back, adding a percussive element to the sound while amplifying the tone.

Hinton's prosperous studio career began in 1953, when bandleader and entertainer Jackie Gleason invited him to record with his orchestra. One of only of two black musicians in the 65-man ensemble, Hinton's outstanding musicianship, versatility and professionalism led to countless studio bookings over the years. He became a television staff musician, working regularly with Gleason and later Dick Cavett. Also a fine photographer, Hinton documented many great jazz musicians in photographs he took over the course of his career.

Through his success, doors were also opened for many other black musicians to get more studio gigs. Hinton was known to mentor to dozens of aspiring young bass players. He also had a strong sense of passing on the tradition. As bassist John Clayton noted, "Hes the kind of person thats always anxious to share."

A search of The Jazz Discography reveals Hinton as the most-recorded jazz musician of all time, having appeared on 1,174 recordings. Hinton died in 2000 at the age of 90.