Accessibility links
Ranking The Bond Theme Songs Blogger Drew Kerr talks about his critique of the many title songs accompanying James Bond movies. He's ranked all 20 of them from best to worst and talks about his selections and criteria here.

You Only Live Twice

1. "You Only Live Twice," by Nancy Sinatra

5. "On Her Majesty's Secret Service," by The John Barry Orchestra

7. "From Russia With Love," by Matt Monro

8. "Nobody Does It Better," by Carly Simon

9. "Live and Let Die," by Paul McCartney and Wings

10. "Diamonds Are Forever," by Shirley Bassey 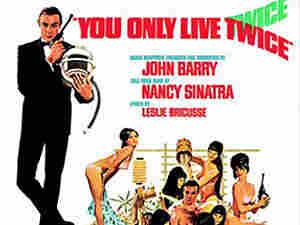 While Kerr works in public relations by day, his alter ego on the Web is Total Music Geek. He has taken it upon himself to rate the many individual James Bond movies' theme songs.

For Kerr, a "classic" Bond movie song is made up of several elements.

"It has to be seductive, and obviously have a spy-ish sound, usually that minor key," he says. "I think, in a way, you have to honor John Barry, who created most of the James Bond music through the years with his sort of 'horn stabs,' and the way he imagined the theme in how these songs would sound."

"It's such a mish-mash of telephonelike vocals, these jagged samples, and no melody at all, and sort of an S&M undertone," he says. "Besides not sounding like any Bond song, it's just a bad song."

Kerr places "Thunderball" by Tom Jones at No. 4.

"Talk about the epitome of macho," Kerr says. "Tom Jones had this amazing voice, and if anyone ever doubted what goes on in that man's lungs, just listen to the end of the song, when he just brings up that word 'thunderball' and extends it for what seems like an eternity."

In a surprise pick, Kerr lists "The Living Daylights" by a-ha, composed by John Barry, at No. 3.

"It just sounds like a wonderful blend," Kerr says. "It's a great, exciting, very melodic song."

No. 2 is Shirley Bassey singing "Goldfinger." Kerr calls the track "the blueprint for what would be a James Bond song, really the flagship."

And at No. 1: Nancy Sinatra's "You Only Live Twice." Kerr says it fits all the usual Bond criteria, and goes further.

"It also had that existential thing a lot of Bond movies had," he says. "There's something very emotional and cutting about that song."

Kerr says that the current "dark days" of Bond title songs set in during the late 1980s.

"It's very hard to write a hit song," he says. If it weren't, "We'd all be writing James Bond songs."