Accessibility links
A Vegetarian Thanksgiving Even if you don't live meatlessly yourself, you might have a vegetarian or vegan at your Thanksgiving table. Offer your meat-free guests something more substantial than a cobbled-together plate of traditional vegetable side dishes. 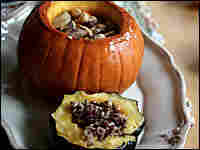 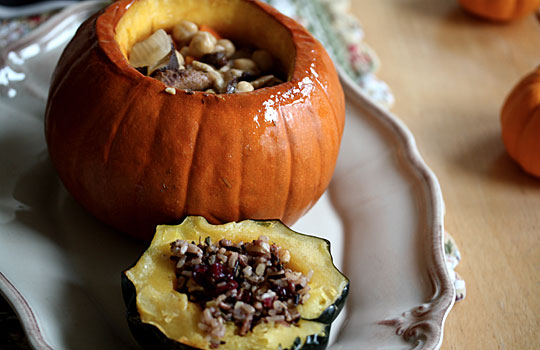 Do you have special recipes and food traditions for the holidays? What one dish must be on your Thanksgiving table? Share your best holiday food stories with Kitchen Window and the NPR Community here.

You may not even miss the turkey.

On Thanksgiving, expressing gratitude through a whole baked pumpkin stuffed with chewy barley and hearty root vegetables can be the beginning of a stellar holiday season.

When fall swoops in and the days grow shorter, a plate of sweet, pureed butternut squash with caramelized shallots can help ease the transition. A whole roasted cauliflower, too, can make one almost immune to the chill outside.

I've found that even on the years we did serve turkey on Thanksgiving, the vegetarian dishes were exclaimed over and gobbled up with similar appreciation.

Even if you don't live meatlessly yourself, you'll probably have at least one vegetarian or vegan seated at the table. It's grand to offer your meat-free guests — or yourself — something a bit more substantial than a cobbled-together plate of all the traditional vegetable side dishes. Doing so needn't be intimidating or even time-consuming.

The typical holiday table groans with an abundance of side dishes, some more enticing than others (think a light saute of seasonal vegetables or roasted cauliflower rather than a cream-laden casserole). It's true that if you're skipping the turkey, there are plenty of other things to eat, but filling up on mashed potatoes and corn bread can leave one feeling a bit hollow.

This time of year is when we give thanks for the harvest and celebrate the season's bounty — and what better way to do so than by making good use of seasonal produce?

Throughout the years, my Thanksgiving table has boasted a baked tofu marinated in a sweet-and-sour sauce that caused even the turkey lovers to sigh in happiness. I've split a butternut squash in half and roasted it in a little olive oil until it turned melty and sweet. I topped it with a sort of black bean and onion stew that was certainly nontraditional but no less delicious. I've made good use of sweet potatoes, leaving out the extra sugar and mashing them into savory splendor.

I do love my vegetables — not a shred of meat has passed my lips in over a decade. I don't miss it, although the scent of that slow-roasting turkey can make me nostalgic.

When I lived on the East Coast, I played hostess for many years to a group of friends — mostly ex-pats from California — who couldn't make it home to their families for Thanksgiving. In the beginning, I kept the affair simple and simply sans turkey.

The first year I had my own apartment, my brother came down from Philadelphia to spend the holiday weekend with me. Washington, D.C., was very cold that November, and we went for a late-morning walk through Rock Creek Park. We discussed the menu we'd cook later that day — both of us were vegetarians at the time, though he has since gone back to meat — and kicked at the ice that had frozen the trail.

We dismissed a "tofurkey" — a faux-meat, soy-based version of a turkey — as being a little too strange. We considered making lasagna in a nod to the dish my aunt had made me when we'd spent Thanksgivings together, but it seemed like too much work. We thought about forgoing a main dish altogether and filling up on mashed potatoes — but no, I said. Surely we were more ambitious than that.

I came home from that chilly walk and made what would be the first of many Thanksgiving mushroom pies. I dug out a battered copy of the Moosewood Cookbook for inspiration. I sauteed mushrooms, stirred in cream and liberally added cheese. When we finished dinner that night, we could hardly eat dessert.

As the years passed and I kept cooking, adding guests and expanding my range, I lightened things up. I went to farmers markets and discovered a real appreciation for baked squash. I left out the cheese and incorporated more Brussels sprouts. I invested in wild rice and skipped anything heavy or pre-packaged.

I made vegetables the real stars.

Now when I cook my vegetarian Thanksgiving offerings, I try to prepare dishes that are light yet satisfying, and which incorporate as many vegetables as possible. Baked or roasted squash often figures prominently, especially because at this time of year the market is overflowing with colorful and diverse offerings.

I've included recipes here that are appropriate for the vegetarian or vegan at your Thanksgiving table, and which highlight fall's seasonal staples. I've also gone for a healthful approach — these dishes are packed with whole grains and call for olive oil rather than butter.

Don't be surprised if you catch your turkey-eating guests sneaking more than a few tastes. 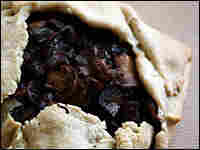 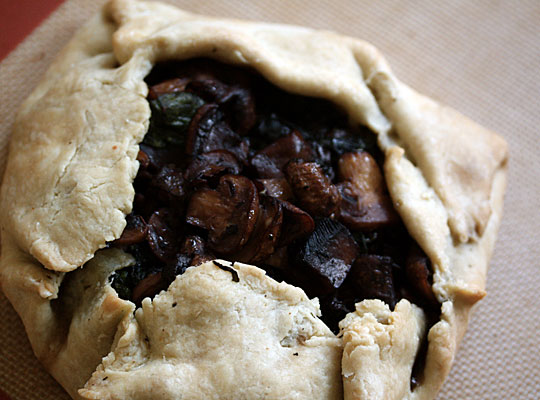 My mom makes a delicious mushroom galette for me each year at Thanksgiving, and I've taken that idea as my inspiration here. I've removed the cheese and butter to make it lighter and vegan-friendly.

Mix the flour and salt. Drizzle the olive oil over the flour and cut in with a fork, combining lightly until the mixture resembles coarse meal. Sprinkle water over the flour, a tablespoon at a time, and mix lightly with a fork. With your hands, press the pastry lightly into a ball, wrap in waxed paper, and let rest in the refrigerator at least 20 minutes.

Chop the shallots and place them in a frying pan with the olive oil. Saute over medium heat until they begin to soften. Lower the heat and add the wine. Slice the white and portobello mushrooms, and add them to the pan, cooking until they soften and release their liquid. Add the spinach, salt, pepper and herbs and cook until the spinach is wilted.

On a wide surface, roll out the dough between two sheets of parchment paper until it becomes a 1/4-inch-thick circle. Arrange the vegetable mixture in the middle of the dough, and loosely gather the dough around the filling, leaving an opening at the top (the dough won't close completely). Place the galette on a new sheet of parchment paper on a baking sheet and bake in the middle of the oven until filling is bubbly and crust is lightly browned, about 35 to 40 minutes. 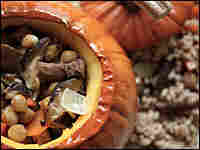 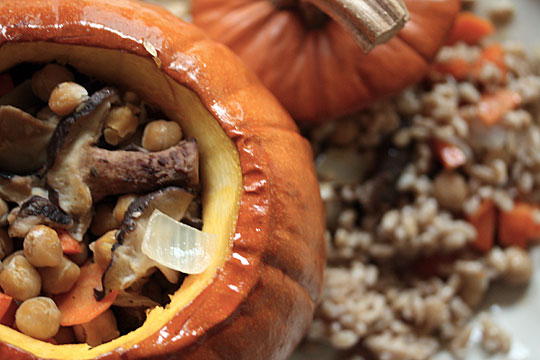 Serving the stew out of a pumpkin placed in the middle of the table makes a dramatic and beautiful main-dish presentation.

1 can chickpeas, drained and rinsed

Cut out top of pumpkin and scoop out seeds with a metal spoon.

Grease a shallow baking dish with olive oil and arrange the pumpkin and top cut side down. Bake until tender but not mushy, about 40 minutes.

Place the barley and 2 1/2 cups water in a saucepan. Bring to a boil, then lower heat and cover. Cook until the barley is tender and the water is absorbed, about 30 minutes.

Meanwhile, in a frying pan, heat the olive oil over medium heat. Add the onion and mushrooms and cook a few minutes, stirring occasionally. Add the parsnip and carrots; reduce heat to low. Add the water and cover. Cook until vegetables are tender, about 5 minutes. Add the chickpeas, salt, pepper and oregano, and stir well to combine. Add the cooked barley and simmer.

To assemble, carefully pour the stew into the pumpkin. 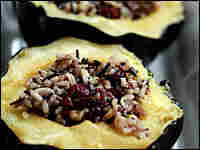 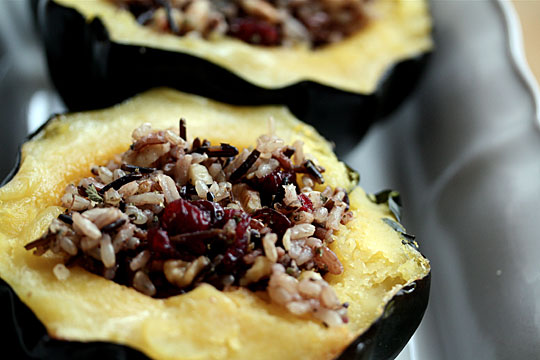 You can easily increase the amounts in this recipe to fit the number of guests who'll be skipping the turkey.

In a shallow baking dish, coat with olive oil and place the halved squash cut side down. Put in the oven and bake for about 15 minutes, or until just tender.

In a pot, bring the vegetable broth to a boil and add the rice. Cover, lower the heat and cook until the broth is absorbed, about 30 minutes. Remove from heat. In a bowl, mix the rice, cranberries, walnuts, salt and pepper. Spoon the rice mixture into the squash.

May be served warm or at room temperature.

The gravy thickens up quite a bit, so keep some warm water or vegetable broth on hand to thin it out before serving, and for leftovers — for example, the mushroom galette.

Heat oil in a medium saucepan over medium heat. Saute onion and garlic until soft and translucent, about 5 minutes. Stir in flour and soy sauce to form a smooth paste. Gradually whisk in the broth.

Season with sage, salt and pepper. Bring to a boil. Reduce heat and simmer, stirring constantly, for 8 to 10 minutes, or until thickened.