Accessibility links
In Ancient Dramas, Vital Words For Today's Warriors Were the tragedies of Sophocles written for soldiers dealing with post-traumatic stress disorder? The artists behind The Philoctetes Project think so — 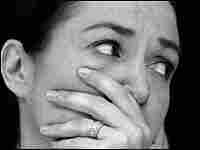 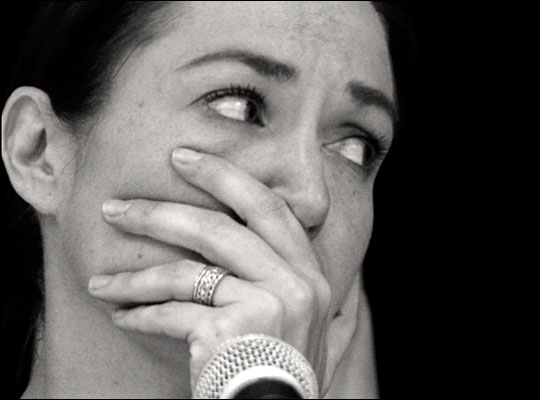 In fact, some think that the Greek playwright Sophocles was writing, in military dramas like Ajax and Philoctetes, about what today we call post-traumatic stress disorder — and that his plays were performed by veterans, for veterans, in part to help them heal.

Now Sophocles is finding a military audience once again. The venue? A Marriott hotel ballroom, where 300 uniformed men and women sit watching, box lunches on their laps.

Onstage, a soldier's wife weeps over the carnage caused by her husband — the crazed combat veteran Ajax, who in a rage has slaughtered dozens of farm animals, believing them to be his superior officers.

The cast, including John Adams star Paul Giamatti as Odysseus, Marine-turned-actor Adam Driver as the Chorus, and the husband-and-wife Broadway veterans Bill Camp and Elizabeth Marvel as Ajax and Tecmessa, is performing at something called the Warrior Resilience Conference.

It's a three-day gathering designed to help military personnel — from enlisted men and women to generals — deal with war's emotional toll.

Brig. Gen. Loree Sutton, who runs the Pentagon division behind the conference, says that despite the graphic horrors depicted in Sophocles' tragedies, today's warriors can find comfort in them.

The plays can reassure a soldier, she says, "that I am not alone, that I am not going crazy, that I am joined by the ages of warriors and their loved ones who've gone before me, and who have done what most in society have no idea our warriors do."

After Thousands Of Years, A Play Torn From The Headlines

The Philoctetes Project, which brought the plays to the Warrior Resilience Conference, is the brainchild of Bryan Doerries, a translator and director of Greek and Roman drama. Philoctetes is a Greek warrior who gets bitten by a poisonous snake just before the Trojan War. When his injury makes him a liability, his generals abandon him on an island where he lives by himself — in great pain — for nine years.

When the veterans-care scandal at Walter Reed Army Medical Center made headlines in 2007, Doerries saw parallels.

"On every front page," Doerries says, "there were pictures of modern Philocteteses, waiting for treatment, abandoned on islands, just like the character in the play. And all of a sudden it became a revelation that this play was about a wounded vet who was waiting for treatment and had to accept it from a medical establishment he no longer trusted."

That anguish and mistrust runs through Sophocles' character Ajax as well. At the end of the Trojan War, Ajax feels he's been badly mistreated by the military. He grows depressed, possibly psychotic, and attempts to kill first his generals and then himself.

"It's an amazing thing that the military is so interested in these [plays]," says Giamatti, who points out that from one perspective, both Philoctetes and Ajax can seem anti-military. The title characters, he explains, essentially rail at their superior officers: "'How could you have done this to me? I gave you my loyalty and strength and you turned me into a monster.'"

'You Have To Find Your New Normal'

Marshele Waddell, the wife of a Navy SEAL and the author of a book about the impact of war on marriage, not surprisingly identifies most with the character Tecmessa, Ajax's wife.

"I'm very familiar with what Tecmessa refers to as that thousand-yard stare," Waddell tells the crowd as part of a talkback after the performance. "My house, like hers, has also become a slaughterhouse. I want to underscore today that the aftermath of war is a battle that is fought on the home front."

Retired Marine Corps Sgt. Andy Brandi, a Vietnam veteran, steps to a microphone to ask Waddell how to help military spouses cope with the way their husbands and wives change when they've been in combat. In battle, Brandi points out, soldiers form intense bonds with their comrades — a singular kind of intimacy that "extends to our fellow warriors but not to our wives or husbands."

"The rules definitely change," Waddell acknowledges, "and there's no going back to what the couple had before combat. So what I counsel ... is, 'That's no longer on the map, so don't look for it. You have to find your new normal.'"

And in turn, says Doerries, he and the civilian actors learn a lot about the plays from the military audience.

"It's as if Ajax and Philoctetes are written in a kind of code that we as civilians cannot understand, that the military must explain to us," he says.