Accessibility links
The Secret Society Of Superorganisms Superorganism species consist of many individuals working within a self-sustaining social unit — like leafcutter ants.

Listen
The Secret Society Of Superorganisms 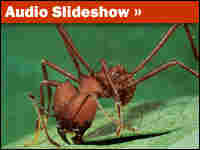 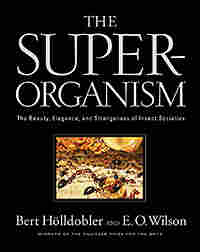 Note To The General Reader

Imagine that 1 million years ago, long before the origin of humanity, a team of alien scientists landed on Earth to study its life-forms. Their first report would surely include something like the following: This planet is teeming with more than 1,000 trillion highly social creatures, representing at least 20,000 species! Their final report would surely contain the following key points:

Such is the array of phenomena on which we two Earth-born biologists will now expand. The ants, bees, wasps, and termites are among the most socially advanced nonhuman organisms of which we have knowledge. In biomass and impact on ecosystems, their colonies have been dominant elements of most of the land habitats for at least 50 million years. Social insect species existed for more than an equivalent span of time previously, but were relatively much less common. Some of the ants, in particular, were similar to those living today. It gives pleasure to think that they stung or sprayed formic acid on many a dinosaur that carelessly trampled their nests.

The modern insect societies have a vast amount to teach us today. They show how it is possible to "speak" in complex messages with pheromones. And they illustrate, through thousands of examples, how the division of labor can be crafted with flexible behavior programs to achieve an optimal efficiency of a working group. Their networks of cooperating individuals have suggested new designs in computers and shed light on how neurons of the brain might interact in the creation of mind. They are in many ways an inspiration. The study of ants, President Lowell, of Harvard University, said when he bestowed an honorary degree on the great myrmecologist William Morton Wheeler in the 1920s, has demonstrated that these insects, "like human beings, can create civilizations without the use of reason."

The superorganisms are the clearest window through which scientists can witness the emergence of one level of biological organization from another. This is important, because almost all of modern biology consists of a process of reduction of complex systems followed by synthesis. During reductive research, the system is broken down into its constituent parts and processes. When they are well enough known, the parts and processes can be pieced back together and their newly understood properties used to explain the emergent properties of the complex system.

Synthesis is in most cases far harder than reduction. For example, biologists have come far in defining and describing the molecules and organelles that compose the foundation of life. At the next higher major level of biological organization, biologists have further described in precise detail many of the emergent structures and properties of cells. But this achievement is still a long way from understanding fully how molecules and organelles are assembled, arranged, and activated to create a complete living cell. Similarly, biologists have learned the properties of many of the species that compose the living parts of a few ecosystems—for example, ponds and forest patches. They have worked out large-scale processes, including material and energy cycles. But they are far from mastering the many complex ways in which species interact to create the higher-level patterns.

Social insects, in contrast, offer a far more accessible connection between two levels of biological organization. The lower-level units in this case, the organisms, are relatively simple in the way they interact to create colonies, and thus, the colonies themselves are not nearly so complex in structure and operation as cells and ecosystems. Both of these levels, organism and colony, can be easily viewed and experimentally manipulated. As we will show in the chapters that follow, it is now possible to press far ahead in this fundamental enterprise of biology.

We will conclude this introduction with a guess. If alien scientists had landed to study Earth's prehuman biosphere, one of their first projects would have been to set up beehives and ant farms. This is our biased guess, because we have been fascinated by the social insects, and in particular the ants, during our entire scientific lives. The reader will find this slant throughout this book. We have chosen examples mainly from the ants and focused on those with which we are most familiar, but we repeatedly "glance over the fence," and especially to the honeybees, the best studied of the social insect species. This book is not intended to be as comprehensive a monograph as The Ants (1990). Rather, our intention here is to present the rich and diverse natural history facts that illustrate superorganismic traits in insect societies and to trace the evolutionary pathways to the most advanced stages of eusociality. Our intent in doing so is to revive the superorganism concept, with emphasis on colony-level adaptive traits, such as division of labor and communication. Finally, in presenting the subject this way, we visualize the colony as a self-organized entity and a target of natural selection.

In this book, we view the insect colony as the equivalent of an organism, the unit that must be examined in order to understand the biology of colonial species. Consider one of the most organism-like of all insect societies, the great colonies of the African driver ants. Viewed from afar, the huge raiding column of a driver ant colony seems like a single living entity. It spreads like the pseudopodium of a giant amoeba across 70 meters or so of ground. A closer look reveals it to comprise a mass of several million workers running in concert from the subterranean nest, an irregular network of tunnels and chambers dug into the soil. As the column emerges, it first resembles an expanding sheet and then metamorphoses into a treelike formation, with the trunk growing from the nest, the crown an advancing front the width of a small house, and numerous branches connecting the two. The swarm is leaderless. The workers rush back and forth near the front. Those in the vanguard press forward for a short distance and then turn back into the tumbling mass to give way to other advancing runners. These predatory feeder columns are rivers of ants coming and going. The frontal swarm, advancing at 20 meters an hour, engulfs all the ground and low vegetation in its path, gathering and killing all the insects and even snakes and other larger animals unable to escape. After a few hours, the direction of the flow is reversed, and the column drains backward into the nest holes.

To speak of the colonies of driver ants — or other social insects, such as the gigantic colonies of leafcutter ants (described in Chapter 9), the honeybee societies, or the termite colonies — as more than just tight aggregations of individuals is to conceive of superorganisms and invite a detailed comparison between the society and a conventional organism.

In the 18 years since we wrote The Ants, an astounding wealth of information has been revealed from the phylogenetic primitive (ancestral) ant species belonging to the poneromorph group, the subject to which Chapter 8 is devoted. Although some species of this group exhibit all the key superorganismic traits, such as castes, division of labor, and sophisticated communication (topics treated in Chapters 5 and 6), the societies of many other poneromorph species are characterized by intense competition among nestmates for reproductive privileges. Group members are organized in dominance hierarchies, which, from time to time, are challenged and overthrown by members of the society ready to take the top position. Although the division of labor and communication in these societies is quite primitive, the behavioral interactions among nestmates are complex, with dominance displays and submissive behaviors, chemical signaling of reproductive status, and even individual recognition. These societies exhibit superorganismic traits, but are far from possessing the ultimate superorganismic organization exhibited by the driver ants and the leafcutter ants. 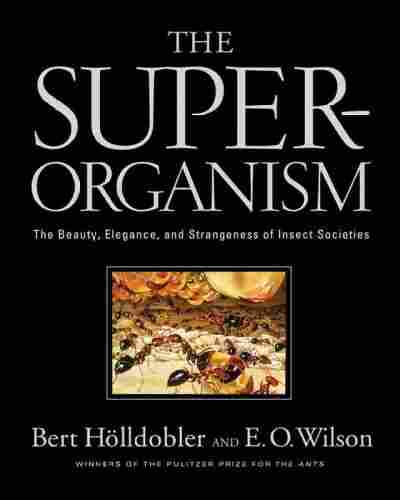