Accessibility links
Mercy: Behind Roy Orbison's 'Pretty Woman' One day, Roy Orbison's first wife walked down the street to the store. By the time she returned, the rock 'n' roll pioneer had already written his most enduring hit. "Oh, Pretty Woman" is one of the newest additions to the National Recording Registry. 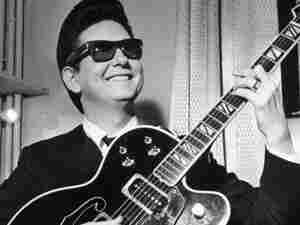 Today marks the 20th anniversary of the death of rock 'n' roll pioneer Roy Orbison. Appropriately, this year has seen the release of a four-disc retrospective called The Soul of Rock and Roll. And the Library of Congress has added Orbison's song, "Oh, Pretty Woman" to the National Recording Registry.

The song was written for Orbison's first wife, Claudette Frady. One day, she left for the store — by "walking down the street" — and by the time she returned, Orbison had written what would become his most enduring hit.

Frady died in a motorcycle accident in 1966, two years after the song hit No. 1 on the charts.

Independent producer Ben Manilla spoke with Barbara Orbison and Bill Dees, the co-writer of "Oh, Pretty Woman," to tell the story behind of Roy Orbison's most enduring hit.

"He turned to me with the guitar lick, and he said, 'I feel like I need to say something while they're playing [that guitar lick],'" Dees says. "I said, 'Well, you're always saying [the word] 'mercy,' why don't you say mercy?' You know, I said, 'Every time you see a pretty girl you say mercy.'"