Accessibility links
Eastwood's Veteran Turn In 'Gran Torino' Once best known as a western and action star, Clint Eastwood has shown he is just as capable a director. He stars as a disgruntled, racist war veteran in the new film Gran Torino.

Once best known as a western and action star, Clint Eastwood has shown he is just as capable a director. He stars as a disgruntled, racist war veteran in the new film Gran Torino.

This interview was originally broadcast on Oct. 23, 2008. 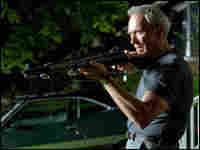 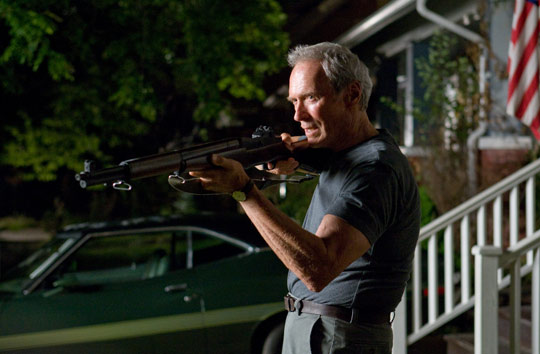 Rated R for language throughout, and some violence. 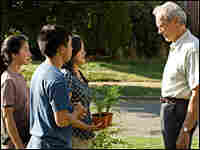 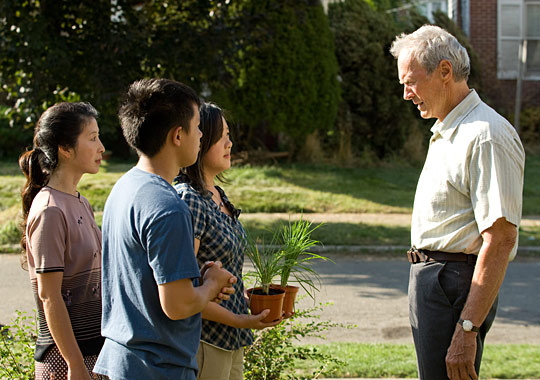 'Why Can't You Leave Me Alone?'

'Do You Want To Come Over?'

'You'll Need One of These'

The erstwhile Dirty Harry defends one of the country's lesser-known minorities in director Clint Eastwood's second production in as many months.

Gran Torino combines the usual elements of Eastwood's recent movies, including melodrama, comedy and social comment — but this time the proportions are way off.

Introduced at his wife's funeral, Walt Kowalski (Eastwood) now has nothing left but his dog, his modest house and the 1972 Gran Torino in his garage.

A veteran of the Korean War and a Ford assembly plant, Walt can still find bantering, slur-filled conversation at the local bar or barber shop. But he's estranged from his sons and grandkids, and his Detroit neighborhood has been colonized by people he calls "gooks," "slopes" and worse.

Actually, they're Hmong, members of an ethnic group that fled Southeast Asia after choosing the losing side in the U.S. war against communism. Walt doesn't know that, but it doesn't matter. He hates everything new or foreign, so much so that he growls at the modern world like a junkyard dog.

Walt's next-door neighbors invade his life in the person of Thao (Bee Vang), a mild-mannered teenager who's being pressured to join a gang. Thao would rather garden, but is forced to try stealing the Gran Torino. Met with Walt's Army-issue rifle, Thao fails his tough-guy initiation.

After Walt protects Thao and his family in another gang-related incident, the boy's outgoing older sister, Sue (Ahney Her), begins to cultivate her crusty neighbor. She introduces Walt to Hmong cuisine and to the plight of her people in the U.S.

As in Million Dollar Baby, Eastwood plays a man of action who's offended by the Catholic church's dogmatic insistence that it understands mortality better than a grizzled vet who's seen comrades die. And like the protagonists of Flags of Our Fathers and Letters from Iwo Jima, Walt has learned firsthand that self-sacrifice is not transcendent. Yet he ultimately assumes a Christ-like posture, both to save his new friends and to put Janovich in his place.

The amusing moments include a birthday, when Walt gloweringly receives such old-person gifts as a telephone with extra-large numbers on the keypad. Almost as funny, although not intentionally, are scenes in which Walt is told the truth about himself by various Hmong, including a shaman who notes that Walt is "not at peace."

No kidding — didn't the seer notice that Walt is played by Clint Eastwood?

Nick Schenk's screenplay is neatly structured and — despite supposedly not having been written for Eastwood — dovetails comfortably with the writer-director's recent concerns. But Walt Kowalski is just not convincing, even as a semi-comic character. His blustering racism is as one-dimensional as his reluctant heroism, which is why Gran Torino is less a sleek hybrid than a multigenre pileup.