Accessibility links
'Shadows' Uncovers Indian Massacre Historian Karl Jacoby tells the story of an 1871 Indian massacre from four different perspectives in his new book, Shadows at Dawn. Jacoby talks with Jacki Lyden about the tragic event and its legacy.

Historian Karl Jacoby tells the story of an 1871 Indian massacre from four different perspectives in his new book, Shadows at Dawn. Jacoby talks with Jacki Lyden about the tragic event and its legacy.

From NPR News, this is All Things Considered. I'm Jacki Lyden. We'll journey now to the American Southwest, to the time just after the Civil War. Slavery had ended, but racial tensions were still high, particularly involving American Indians.

Dr. KARL JACOBY (Department of History, Brown University): There's a frequent comparison of the Apache to wolves, and this is a period when people want to wipe out wolves. And so, if you think about the Apache as wolves, then, unfortunately, you start to do these incredibly violent things towards them.

LYDEN: That's historian Karl Jacoby. He's out with a new book called "Shadows at Dawn." It tells the story of one of the darkest events in borderland history - the Camp Grant Massacre. On April 30th, 1871, more than 130 Apache were killed. They were living in a lonely canyon north of Tucson, Arizona. Many of the victims were women and children. And the perpetrators?

Dr. JACOBY: There had been a group of - made up of about 100 people from Tucson. And it's a very motley group, as it were. It's a mixture of probably about six Americans, maybe about 20 to 30 ethnic Mexicans, and the rest are (unintelligible), some Indians. And for two days, they've been traveling secretly at night from Tucson to reach Aravaipa Canyon.

They reach it right in the early dawn hours. They surrounded - the Apache camp is sort of in this canyon with very steep cliffs. The Americans and Mexicans go up to the cliff edges, where they have rifles, and the ton open charged the floor of the canyon and attacked the sleeping Apache campground.

LYDEN: And it's all coordinated. In fact, you have a number of incidents we couldn't even really begin to describe here on the radio. It's just as brutal as anything you could even imagine.

Dr. JACOBY: It is quite brutal. I mean, I guess the one thing I'd want to emphasize for readers is that I feel like historians' roles really are to be truth tellers as much as we can and to look at these things and to record them accurately and tell people about them.

I think the other thing that I did try to do in the book as a whole is try to look for these other moments of reconciliation and accommodation in the fact that after the massacre, that one of the leaders of the massacre, Juan Alias, actually becomes friends with one of the Apache survivors, Captain Chiquito.

Again, I thought it was kind of a striking counterpoint to this incredibly violent period, which I think we have yet to really acknowledge as a people how incredibly vehement the language was and behavior was during the 1860s and 1870s.

LYDEN: So what was the immediate reaction to the massacre? Were the leaders really secretive about what they had done, or did they boast about it?

Dr. JACOBY: This is, again, what's really striking. I guess we would imagine today that people would want to cover this up, but it seems to have been pretty much an open secret in Tucson as to who was involved, and one of the things that I have found that was particularly striking is that some of the Anglo-American participants actually create this historical society, and they really do it to preserve and enshrine the memory of this massacre. And that, to me, was quite striking.

LYDEN: There was a trial, and they did, after all, attack a group of Apaches on land that belonged to Camp Grant, named for President Ulysses Grant. So what was the federal reaction?

Dr. JACOBY: Well, this is the great irony here is that President Grant had this policy, the peace policy, in which part of that was a notion of creating reservations, as this was a very new move in Indian policy during this time period.

So it was seen as a tremendous assault on federal policy to have people attacking Indians that are supposed to be on reservation under federal protection, and so federal authorities prodded and prodded and finally were able to get officials in Arizona to have a trial in December of 1871 of a hundred of the alleged participants. Now, no Apaches were ever called as witnesses. And it took the jury, which was made up of citizens, both Mexican - ethnic Mexicans and Anglo-Americans from Tucson. It only took them 18 minutes to find all of the accused not guilty.

LYDEN: As a historian, what do you think we've learned from this incident that might be applied to contemporary ethnic violence?

Dr. JACOBY: Oh, that's an excellent question. That's really the - perhaps the central question. The way I wrote the book was to have four competing perspectives, and what I wanted to do is to get people to see the participants from the insider perspective and the outsider perspective to see how people could seem very strange to one another, which explains the violence, but also, on some level, really to sympathize with all of the participants, even the people who are committing some of these really awful and horrific acts.

And I think the lesson is maybe a very simple one in the end, which is to say that I think we all have this tremendous capacity to commit acts of violence for what we think are very good reasons. And I just want the book to be a sort of a check on that to help people pause and try to consider things from different perspectives before we go down that route to violence.

LYDEN: Karl Jacoby, his new book is called "Shadows at Dawn: A Borderlands Massacre and the Violence of History." He spoke to us from the studios of WRNI in Providence, Rhode Island. Thank you very much, Karl. 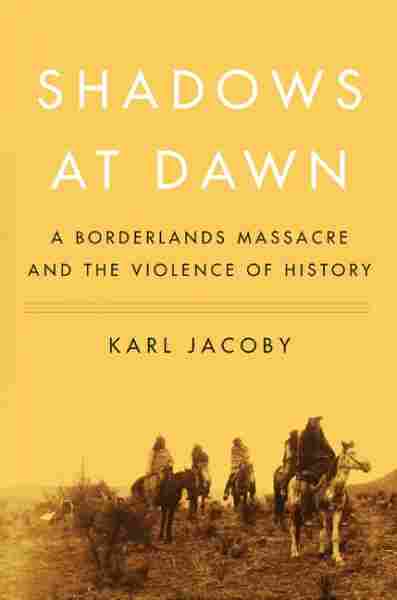 A Borderlands Massacre and the Violence of History