Accessibility links
Kitty Wells: Don't Blame The 'Honky-Tonk' Singer Emmylou Harris says a 33-year-old housewife named Kitty Wells turned both country music and the country on its head with "It Wasn't God Who Made Honky Tonk Angels." With that song, Wells captured the tensions of the time and paved the way for more female musicians. 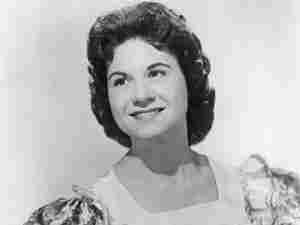 Kitty Wells' recording of "It Wasn't God Who Made Honky Tonk Angels" was banned on the NBC radio network and on the Grand Ole Opry. Michael Ochs Archives hide caption 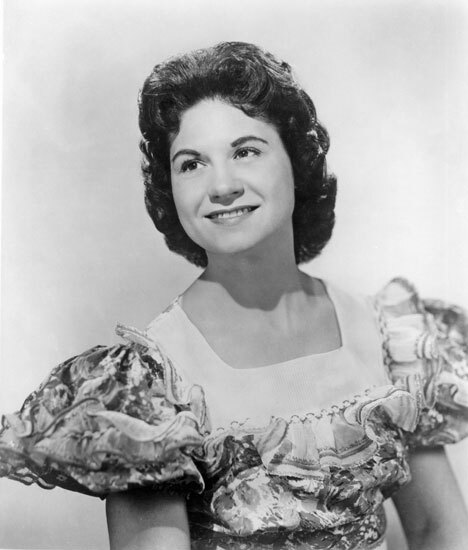 Kitty Wells' recording of "It Wasn't God Who Made Honky Tonk Angels" was banned on the NBC radio network and on the Grand Ole Opry.

In 1952, Hank Thompson's "The Wild Side of Life" addressed wild women and finding women on the wild side of life. Without a female voice, it was natural that an answer song was in order, and J.D. Miller's "It Wasn't God Who Made Honky Tonk Angels" became a controversial hit for then-budding country singer Kitty Wells. The Library of Congress recently added the song to the National Recording Registry.

"Honky Tonk Angels" referred to the women who hung around honky-tonks — dance-hall girls who'd dance with you for a drink and who lived that kind of "wild side of life."

There were more divorces in the post-war era than the United States had ever seen. There was more delinquency and more smoking. People would ask, "Why are we suffering this moral decay?" At the time, many believed it was because women weren't in the home.

"You know, it's OK for a man to go around and cheat and hang out in the bars and expect a little woman to be home with a hot meal," country singer Emmylou Harris says.

A Housewife Gets Banned

In 1952, Wells was a 33-year-old housewife and mother. She stepped into the studio and recorded a song that in many ways captured the tensions of the time.

"All of the sudden, she spoke to a whole psyche," Harris says. "A whole generation of women who probably didn't know that they were not represented on the airways."

"It Wasn't God Who Made Honky Tonk Angels" was banned on the NBC radio network and on the Grand Ole Opry. Harris says it not only offended the male-dominated country-music scene, but also the public at large.

"Back then, it wasn't really considered proper for a young singer who wasn't married to ride around the country with a bunch of guys — even if it was perfectly innocent and they were the guys in the band," Harris says. "In the case of Kitty, she had to be married to Johnny Wright, so it was OK for her to be on the bus with Johnny Wright and the rest of the guys, because she had a chaperone: her husband."

Paving The Way For Women

Wells would not describe herself as a feminist. There's always been a strain of songs in the folk and country-music traditions that spoke from the woman's point of view. A woman like Wells could sing about how a woman feels without thinking she had to be a feminist to sing those songs.

"Well, I really didn't think too much about it, 'cause I always, you know, was pretty natural with the way I felt and the way I, you know, carried myself around," Wells says. "And of course I tried to make that hit with 'It Wasn't God Who Made Honky Tonk Angels.' Well, Capitol Records got to recording the girl singers, so now we got just about as many girl singers as there are men singers."

Harris is one of those singers — and very vocal about her love for the Queen of Country Music.

"She was the perfect representation for that particular time," Harris says. "She really paved the way for a lot of women to get on that bus and ride on down the road."

Mary Bufwack, along with her husband Robert Oermann, is the author of Finding Her Voice: Women in Country Music, 1800 to 2000.

For more in The Sounds of American Culture series, click here.