Accessibility links
What's In The Kennedy Name? Plenty Like Shakespeare's Prince Hal and The Godfather's Michael Corleone before her, Caroline Kennedy may be yet another beneficiary of being born to a powerful family. But need this automatically exempt her from being a capable senator?

I'm going to make a bold statement and predict that Caroline Kennedy, counter to all expectations, will turn out to be an excellent senator, should she be appointed to serve.

That doesn't mean I endorse her selection or approve of the way she has chosen to enter public life. For starters, as dynasties go, I am not a big fan of the Kennedys. I'm not even a liberal Democrat. What's more, I fully understand why many people are offended by her behind the scenes campaign to be anointed senator instead of having to work for it like Hillary Clinton. The whole thing reeks of privilege and entitlement. Americans hate nepotism.

But she seems on track to become Senator anyway, so let's ask a more practical question, namely whether she can be expected to perform well in office. I'm betting the answer is yes.

How do I know? I base my prediction not on any personal knowledge of Ms. Kennedy but purely on the strength of the patterns I discovered in the three years I spent researching a book on dynastic families.

Caroline fits the pattern of late-blooming dynastic successors. The classic case in literature is Shakespeare's Prince Hal — or the Godfather's Michael Corleone. These young people apparently want nothing to do with the family business, and yet, when opportunity beckons, they emerge from nowhere to assume its leadership. This is also called hiding your light under a bushel. By lowering expectations, the successor shines more brightly when he finally emerges. Plus, if he fails, he hasn't got that far to fall. It's a safe strategy, born of insecurity or other personal demons.

Caroline Kennedy appears to have made a career of lowering expectations, presenting herself as a mild-mannered lawyer, author, mother, and philanthropist. But she is still a Kennedy and has not only a detailed knowledge of politics but a keen grasp of the power of her family name — and how to use it.

There also seems to be a real desire to take the torch from the hands of her terminally-ill uncle Ted. This kind of motivation is common in dynastic families, and it is as good a reason as any to go into politics. Indeed, it is better than most. Besides, dynastic successors are often driven to exceed expectations and typically work twice as hard in order to earn their advantages after the fact.

On the other hand, her Achilles heel may be dynastic hubris. I agree with those who say it would be more tasteful and becoming for Caroline to run for office in 2010 rather than accepting it as a gift. This is what I call in my book nepotistic malpractice, and if she doesn't show a flair for the popular touch, like that other dynastic successor Franklin Roosevelt, it will quickly bring her down.

Her candidacy is therefore truly a test of whether background and breeding are sufficient to qualify someone for high political office. It will be an interesting experiment. But I'm betting on dynastic training and innate political gifts.

The Kennedy name is a political talisman of tremendous power. Previously unwilling to use it, she has suddenly and quite unexpectedly decided to do so now. In mythological terms, she has drawn her father's sword from the stone.

All I can say is, Watch out New York! You have a new queen, and her name is Caroline.

Adam Bellow is VP/Executive Editor at Collins Books, a division of HarperCollins, and the author of IN PRAISE OF NEPOTISM: A History of Family Enterprise from King David to George W. Bush. 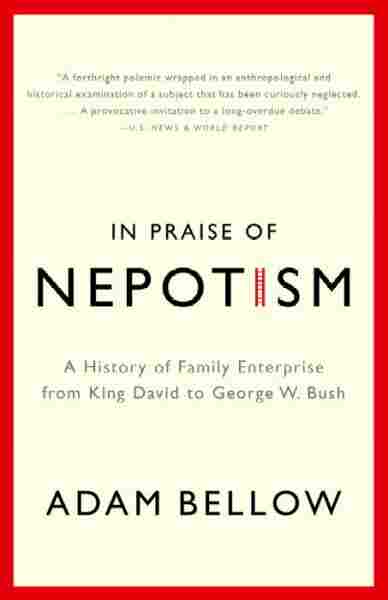 In Praise of Nepotism

A History of Family Enterprise from King David to George W. Bush