Accessibility links
'Mrs. Astor Regrets': Fairytale Turned Nightmare Mrs. Astor Regrets: The Hidden Betrayals of a Family Beyond Reproach tells the story of the Astors of New York, a storied philanthropist family. Shortly after the death of Brooke Astor in 2007, her only child, Anthony Marshall, was indicted on charges of looting her estate. Author Meryl Gordon talks to Scott Simon about the book.

Mrs. Astor Regrets: The Hidden Betrayals of a Family Beyond Reproach tells the story of the Astors of New York, a storied philanthropist family. Shortly after the death of Brooke Astor in 2007, her only child, Anthony Marshall, was indicted on charges of looting her estate. Author Meryl Gordon talks to Scott Simon about the book.

Brooke Astor spent most of her life, and she lived to 105, putting her name on good works and giving some of the fortune that she had inherited to New York's foremost museums, community projects, and the public library. Her name was a pedigree. In 2006, that name splashed across the headlines of a grim and pathetic story. Her grandson, Philip, went to court to accuse his father Anthony of mistreating his grandmother, firing those who took care of her, and skimping so much in her care that she was made to lie down on a sofa soaked with dog urine.

And then after Brooke Astor died in 2007, her son, Anthony, was indicted for stealing from and defrauding his mother. Meryl Gordon covered that story for New York Magazine and has written extensively about the world of the Astors. Her new book is the highly awaited "Mrs. Astor Regrets." She joins us from New York. Thank you so much for being with us.

SIMON: First, tell us a bit about Brooke Astor. So many people said that she had this twinkle in her eye.

GORDON: She really led a remarkable life and warm, charming, talented. What I found fascinating as I was doing my interviews for the book is that it seemed like every man I talked to from 30 year-olds to 80 year-olds, gay, straight, married, they would say, oh, Brooke, with this kind of look of enchantment with her. I found it was rather extraordinary.

SIMON: Well you used the word. She was a bit of a flirt, wasn't she?

GORDON: Oh, she learned the art of flirting from her mother. Her father was a Marine Corps general. Her mother was a southern belle. She was a only child. And in her autobiography, "Footprints," she wrote about her mother's flirtations.

SIMON: I have to ask, would people have detected that twinkle in her eye if she hadn't been so rich?

SIMON: Let me ask you about that marriage to Vincent Astor, who essentially inherited his family fortune when his father, I guess, went down on the Titanic. It's fair to say that the marriage between Vincent Astor and Brooke was not a great love match, isn't it?

GORDON: It certainly doesn't sound that way. The way she's described it, and others have, she was a recent widow. She married three times, and her second husband, who Nancy Reagan described as the love of her life, Buddy Marshall, had died suddenly of a heart attack in November of 1952. And Brooke discovered that she wasn't going to have a whole lot of money. Most of his money was tied up in trust, went to his children, some to his ex-wife. And she was fixed up with Vincent Astor in Memorial - on Memorial Day, and he proposed literally over the weekend.

SIMON: What kind of mother was she to Anthony?

GORDON: She was not a good mother, and that's really one of the sad parts of the story, which I think is one of the reasons that led to this family falling apart. She implied in her autobiography that her son was the product of a marital rape, and she never really bonded with her son. She shipped him off to boarding schools when he was 8 years old. She essentially chose her husbands over her son. She - her second husband didn't like the nanny who had brought up Tony. She fired the nanny, and Vincent Astor didn't like Tony, and Brooke shut him out of her life so that there was a tremendous push-pull.

He was always trying to make his mother love him, and I think it was very hard for her. As many people told me, she looked at him, and she saw his father, and she withdrew.

SIMON: Anthony Marshall established his own identity away from the Astor fortune, didn't he?

GORDON: Well, yes and no. I mean, he was a Marine Corps hero in World War II. He then became - went to the CIA. He set up some businesses. He wanted to become an ambassador, and both he and his mother made major contributions to the Nixon campaign. He was an ambassador in Kenya, a couple of other countries. And then after that term ended, after Jimmy Carter won office, he was out of work, and his mother hired him to manage her money and paid him a salary.

She also talked a lot of her boards and had him put on the boards. So there was a sense that he was always Brooke Astor's son. It was - that's how he was known in New York, not as Tony Marshall.

SIMON: Brooke Astor passed 100 years of age, and people began to notice a decline, good friends, like Nancy Reagan, Henry Kissinger, and others.

GORDON: It turned out that she had been diagnosed with Alzheimer's in 2000, and she had trouble finishing sentences sometime. She would get disoriented. She was slowly losing her grip.

SIMON: Some staff began to notice that her money was being spent in a way that surprised them. And that's kind of at the heart of the scandal, isn't it?

GORDON: What was fascinating to me is Brooke Astor led a very public life, but her life was never quite so chronicled as in the last years. Her bookkeeper, Alice Perdue, suddenly found herself being asked by Tony to write checks out of his mother's accounts to theatrical companies. Alice was concerned. She began taking notes and writing down things that just didn't feel quite right to her because they didn't - they weren't of the interests that Mrs. Astor had had before, and her butler started to hear stories from the nurses about lawyers visiting and things happening. And Chris's reaction was she's got Alzheimer's, and she's signing legal papers and giving away money. This doesn't make sense to me.

GORDON: My impression is she wasn't living in squalor, but certainly the household could have been better maintained. What I think has been fascinating about this case is how it began. Philip Marshall's lawyer originally called it elder abuse. It quickly turned into financial abuse, and the 18-count indictment against Tony Marshall and his lawyer, Francis Morrissey, is really all about money.

They're accused of looting her estate and making all sorts of - coercing her to make changes in her will. And Annette Dela Renta, Philip Marshall, David Rockefeller will all tell you they had no idea this would end in Tony Marshall facing, possibly, 25 years in prison.

SIMON: How does a case that began as a concern by a grandson that his grandmother might be neglected and mistreated become a financial fraud case?

GORDON: The original guardianship lawsuit was settled out of court in October of 2006. Tony Marshall agreed to give back all sorts of money, jewelry, books, etc., and people kind of thought that well, this is over now. Except for during the court proceedings, Brooke Astor's court-appointed lawyer, Susan Robbins, had been looking at all of Brooke's legal papers, and she noticed the Brooke had signed three different codicils. And one of the signatures seemed completely different than the previous ones. She even brought in a handwriting expert. So literally, within just a few weeks after the case was settled, the handwriting expert announced that he believed that Brooke Astor's name had been forged on a document.

So that got the district attorney's attention. They have already been looking at this case to see what would be interesting, but suddenly, they had a forgery charge to investigate.

GORDON: At the moment, they're expected to go on trial some time in late January or early February.

SIMON: We should make this plain. Anthony Marshall has pleaded innocent, hasn't he?

SIMON: And Anthony Marshall, himself, is in his 80s.

GORDON: He's 84 years old, and his defense in all this is that my mother loved me, and my mother realized late in life that she had neglected me, and she wanted me to have these things.

SIMON: How much was Brooke Astor worth?

GORDON: Well, the estimate before the market crash was 200 million dollars. I have been curious just to see what she's worth now.

SIMON: Would this story be quite so fascinating if you took away all the dollar signs?

GORDON: Well, yes and no. I mean, what struck me at the very beginning, and I keep wondering, how did this happen? I mean, how do you get a son accusing his father of abusing his mother? I mean, and I kept thinking, something must have really gone wrong with this family. And if, you know, you dig deep enough, there are many different marriages. It's a little bit of what happens when money becomes a substitute for love.

You really find that there are some universal themes that make it, at least for me, made it fairly compelling.

SIMON: Ms. Gordon, thank you so much.

GORDON: Well, thank you for having me on.

SIMON: Meryl Gordon, her new book is "Mrs. Astor Regrets: The Hidden Betrayals of a Family Beyond Reproach." 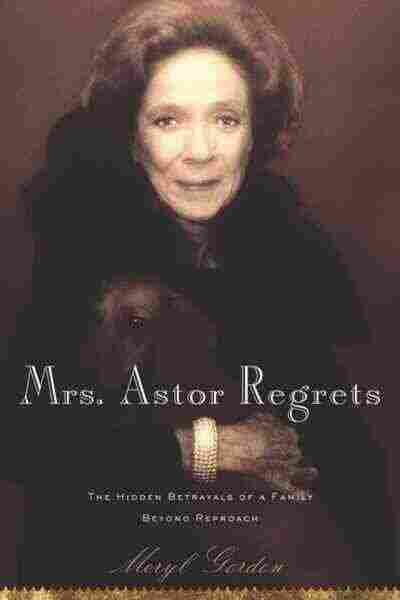 The Hidden Betrayals of a Family Beyond Reproach