Accessibility links
Hands-On Kids' Museums Make Learning Fun Immersion and interaction are the name of the game at children's museums around the country. NPR visited WaterWays in San Jose and the Dinosphere in Indianapolis to see the next generation firsthand. 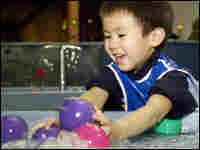 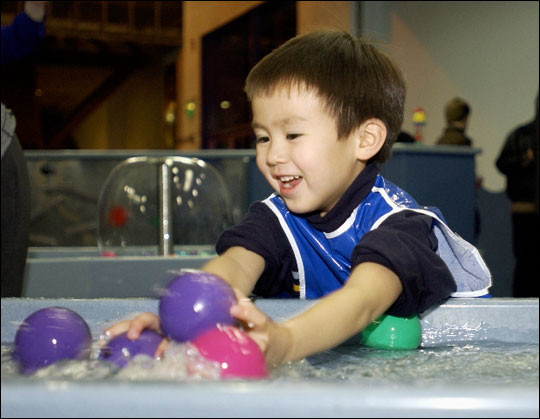 Roll Up Your Sleeves: A young visitor experiments at the WaterWays exhibit at the Children's Discovery Museum in San Jose, Calif. The interactive exhibit — which filters 850 gallons of water every five minutes — invites kids to learn about the physical (not to mention fun) properties of water.

While the children may be soaking up some of the basic principles of water pressure, they're also joyously dipping their germy little hands into the exhibit itself. Some kids even lap at the water like puppies.

But parents can rest assured — 850 gallons of water circulate through WaterWays' two filtration systems every five minutes. One of them catches any material larger than 1 micron, and the other combines two ozone and bromine sanitation systems to guarantee the highest water quality.

Kids love water, but this exhibit is particularly meaningful to children in a drought state.

"Kids in California don't get exposed to the rain very much," says Marilee Jennings, executive director of the museum. She says it's thrilling for these kids to sit under a Plexiglas shell and gaze up into a simulated rainstorm.

Immersion and interaction are the two words you'll hear over and over, when talking tech with children's museum experts. The Children's Museum of Indianapolis is the biggest — and arguably the best — children's museum in the world. 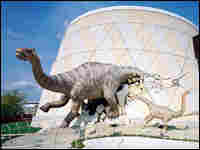 toggle caption
Courtesy of The Children's Museum of Indianapolis 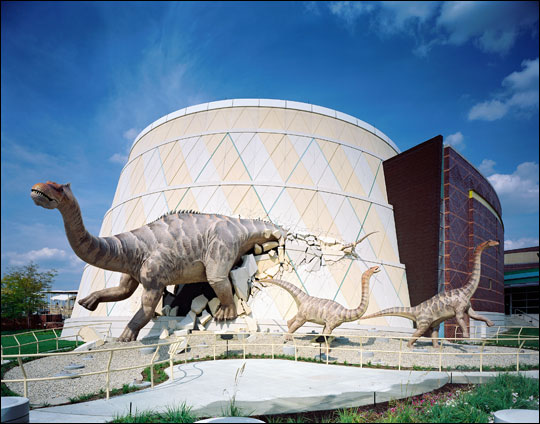 Bringing History To Life: The $25 million Dinosphere at the Children's Museum of Indianapolis features hands-on archaeological digs and one of the largest fossil displays in the United States.

Courtesy of The Children's Museum of Indianapolis

At 450,000 square feet and five stories high, the museum attracts more than 1 million visitors a year. Many come specifically for Dinosphere; the $25 million dinosaur exhibit began as an IMAX-style theater, but when similar theaters opened nearby, museum officials decided to "recycle" theirs into a sort of fancy dinosaur terrarium.

The high-tech, large-format domed screen makes it possible for clouds and great winged pteranodons to float across a sky that darkens into storms. Scent pods waft forth faint aromas of pine, magnolia and — brace yourself — sweaty elephant. (That smell, after all, would be nectar to a hungry Tyrannosaurus rex.)

But littler kids can get anxious here. So a grotto just by the exhibit entrance offers a safe play space, with dinosaur costumes with soft cotton dinosaur eggs, so little kids can work up their courage before venturing into the exhibition proper. Soon, they're running around and roaring with the big kids.

The games and immersive activities here are designed to capture kids' interest and imagination, but also keep them moving, Durability is an enormous issue. Exhibit designers often filch materials made to be used in factories — they can hold up to the loving pounding and thwacking of children.

The Dinosphere also contains a working paleontology lab and a life-size excavation pit, where kids dig a realistic dinosaur skeleton out of specially composted sandy material, trademarked by the museum.

All of this qualifies as "slow technology," or technology that's created to support play, rather than being the main focus. Children's museums try to integrate low and high technology to keep kids interested in the exhibition's concepts.

A public library kiosk in Dinosphere lets kids from anywhere in Indiana check out library books and send them back through the state's interlibrary loan system.

Cathy Hamaker, an exhibit developer at the museum, says that for an exhibit about castles and catapults, she even took the Wii gaming system as inspiration: "We were originally going to have them throw things at real castle walls, but then we thought, 'Eh, it's gonna end up with little brother getting put in the catapult,' " Hamaker says.

Museum directors know that kids see enough screens, but they also know that kids are attracted to them. The trick for exhibit designers is combining familiar technology with activities that capture a child's curiosity in new ways.

"Technology is a controversy, I think, in children's museums," says Jennings of the San Jose museum. "Part of what we aspire to is to get kids away from the screens."