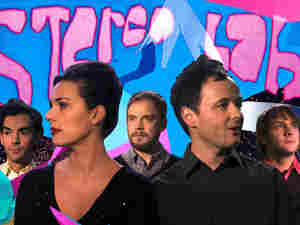 Stereolab finds a new way to make subtly textured throwbacks to the British and French pop of the '60s. courtesy of Stereolab hide caption

No matter how hard they might try to deviate, some bands just invariably sound like themselves. It might be a fundamental consistency of sound and vision, but it can also have the effect of ironing out the highest peaks and the lowest lows, making the music easier to dismiss as songs and albums blend together.

But throughout a long career, this consistency can be freeing, as a band like Stereolab can simply craft and release the album it wants without worrying much about gaining or losing fans. Still, it does invite the question: If a group does the same thing over and over again, but does it really well, does that essentially render it critic-proof? And how does a band like Stereolab attempt to go back to the well for inspiration?

Where many bands (including Stereolab in its earliest Krautrock iterations) look to noise and deconstruction as a means for experimentation, Gane and company experiment more with mood, repetition, and meticulous detail. Ultimately, while there might be a sense of sameness to its songs, the band continues to evolve by finely tuning its richly produced and orchestrated pop songs.