Accessibility links
At Home In Paris With Pianist Martial Solal He still isn't very well-known in the U.S., but Solal is considered one of the greatest living European jazz musicians. And at 81, the pianist still keeps a schedule of concerts and club gigs that would wear out someone half his age.

Listen
At Home In Paris With Pianist Martial Solal 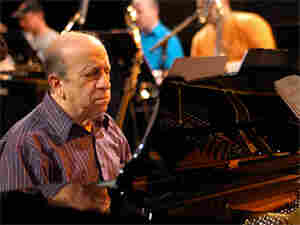 Martial Solal keeps a Macintosh computer in almost every room of his house in the suburbs of Paris.

"I'm crazy about those machines," Solal says. "I have five computers in the house."

He uses them to compose, to create variations on those tunes and to test out improvisations. Aside from his relentless jazz performances, he has composed 15 piano etudes and more than 35 film scores.

When Apple came up with composing software, it marked a kind of deliverance for Solal. Sitting at the piano, he spins his chair toward one of the computer keyboards. The written score of a new etude he is composing opens up.

"It's fantastic to write the music and to hear the music you just composed," he says.

It's not often that an 81-year-old embraces such complex technology. But, then again, not every 81-year-old — or even someone half his age — can maintain the busy international touring schedule that the great jazz pianist does.

Though still little-known in the U.S., Solal is one of the greatest European musicians alive today. His life at the piano ranges from lessons with his opera-singer mother in Algiers to post-war collaborations with Django Reinhardt and Sidney Bechet in Paris, to a wide variety of film work.

Solal's music is as complex as his life. Born to Algerian Jewish parents, he moved to France in 1950 when he was 23. He began playing in the underground jazz dives around St.-Germain-des-Pres, and before long, he was recording with the great jazz guitarist Django Reinhardt and ex-pat American saxophonist Don Byas. Fame came to Solal for the music he composed for Jean-Luc Godard's 1960 breakthrough film, Breathless (A Bout de Souffle).

In a new memoir, Solal describes his experiences in the American black jazz world, in the film industry and as a classical composer. His manner betrays an almost childlike sense of curiosity and playfulness. That comes from his lifelong fascination with freedom and structure, says Claude Carriere, a jazz historian and longtime programmer at Radio France.

"He goes in every direction and comes back," Carriere says. "He breaks the tune. ... He plays with the tune."

You could say that that's true of all jazz improvisation, and Carriere agrees — to a point.

"Yeah, but maybe more with somebody like him, because he's so brilliant."

What sets Solal apart from other musicians, according to Carriere, is his mind — how his conscious brain is always engaged in what he's playing.

"He's one of the rare musicians, I think, who can exactly play with his fingers what his brain asks him to do," Carriere says. "You know, because usually many, many piano players, they have so many things under the fingers, they can almost sleep and continue to play. Martial — everything, he thinks he can play it. That's because he has worked, worked, worked every day, hours and hours."

At least two hours, and sometimes six. Even today, at 81.

"I play exercise every morning, but my specialty is to play exercise only with one hand and improvising in the right hand," Solal says. He demonstrates on the keyboard. "See what sort of music it is? It's very enjoyable, because it's never the same. ... I could play for 100 years. It would be never the same, because right hand is very free to do what she wants, and left hand plays just the melody."

Solal spends 20 minutes on these exercises. Then he turns to Rachmaninoff, Chopin and Schumann. He never really plays jazz at home, he says.

"If I play too much improvisation at home, I would maybe have nothing more to say," Solal says. "[I want] to keep the best for the concerts."

Martial Solal says this will be his last year of giving concerts, though it's hard to imagine that he won't make an exception now and then. But to wake up in the morning, take his coffee and not touch his fingers to the keyboard: That's just not something he can imagine.