Accessibility links
Fla. Jews, Muslims Seek Common Ground On Gaza Florida is home to sizable Jewish and Muslim populations. In South Florida, scarcely a day goes by there's not at least one rally in support of Israel, or a protest of the Israeli offensive in the Gaza Strip. But some Palestinian and Jewish activists are joining forces, hoping the broader goal of peace overrides either side's position. 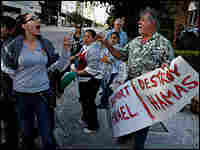 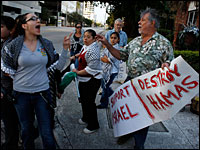 In Europe, Asia and in some American cities, the ongoing conflict in Gaza has led to rising tensions and, in some cases, violence.

A protest in Brussels last weekend over Israel's offensive against Hamas ended with demonstrators smashing windows and overturning police cars. In Miami, a recent rally led to a dozen arrests. But some Palestinian and Jewish activists in Florida are seeking common ground.

Scarcely a day goes by in South Florida that there's not at least one rally in support of Israel, or a protest against the Israeli assault in Gaza. Florida is home to both sizeable Jewish and Muslim populations.

Muhammed Malik is organizing rallies that include both Palestinians and Jews --which some people might consider risky, even foolhardy. Tensions flared at the first event, earlier this month in Miami, with taunts and jeers being thrown by both sides until police stepped in.

He says there were maybe a dozen hotheads out of a crowd of more than 1,000 people.

"When you take that 1 percent, it ruined the rest for everyone else," says Malik, of the South Florida Palestine Solidarity Network. "We all know the media likes to focus on violence, because it's sexy and attracts a lot of advertisers ... . But we hope that peace will also be sexy, too."

This week, a group of Jews and Palestinians decided to try again with a rally for peace in downtown Miami. That sounds simple, but it requires something not usually found at rallies: sensitivity to the other side's position.

Things didn't start well. A few dozen Palestinians and their supporters held up signs and waved Palestinian flags. One of the Jewish organizers, Yatir Nitzany, told Palestinian activist Samia Ahmad that he didn't like what he was seeing.

"Listen, this is an anti-Israel rally," Nitzany said. "The signs, OK, the signs 'Free Palestine' — that's blaming Israel. Everyone has a little banner, 'Free Palestine,' 'End the Occupation.' There's a sign there that says, 'Stop the Holocaust' that Israel's doing to the Palestinians."

After a few minutes, it worked out. The offending signs were removed, and more Jewish activists showed up after being stuck in traffic. Not long after, the still-sparse crowd was waving Israeli flags along with Palestinian ones.

'Our Way Of Riding The Bike'

One of the demonstrators was Jack Lieberman of the Jewish Arab Dialogue Association. He says he hopes that Jews and Palestinians in this country can agree on just one idea: the need for peace. If so, he says perhaps they can encourage the incoming Obama administration to resume the United States' role as a peace broker — which he believes is in Israel's best interests.

Just a few dozen people attended the Miami rally — a fraction of the nearly 2,000 people who showed up at pro-Israel demonstrations in the area a day earlier.

Malik says it takes time for people to lower their guard and put aside their distrust of those on the other side. He says missteps, harsh words and flaring tempers have to be expected.

"It's like when you first learn how to ride a bicycle, you fall a couple times," says Malik. "So, if this is the first time people are coming together, maybe they might disagree here, maybe not be perfect, but you can't expect perfection. Yeah, this is our way of riding the bike with Jewish and Muslim relations. We'll fall off a couple of times, and then we'll get back on."

It's a basic human response.

Faced with the renewed violence in the Middle East, Palestinians and Jews who live in the United States are speaking out for friends and relatives caught in the conflict. The question a few people in South Florida are asking is: Can it be possible to speak out without bringing the conflict and hatred here?