Accessibility links
A Front-Row View Of Obama's White House White House photographers may take images of the president, but it's the public who interprets them. As the official photographer for the Obama White House, Pete Souza will play a key role in chronicling history as it unfolds — and shaping how posterity remembers it. 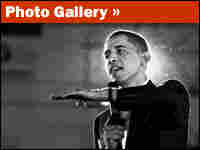 Pete Souza: The Rise Of Obama

The White House photographer talks about having a front-row seat to history -- and knowing when to leave the room. 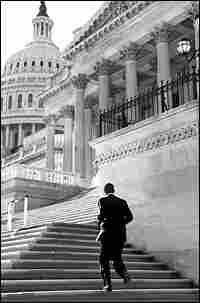 Then-Sen. Barack Obama walks up the steps of the U.S. Capitol on his way to the Senate floor for a vote. Pete Souza/Chicago Tribune hide caption 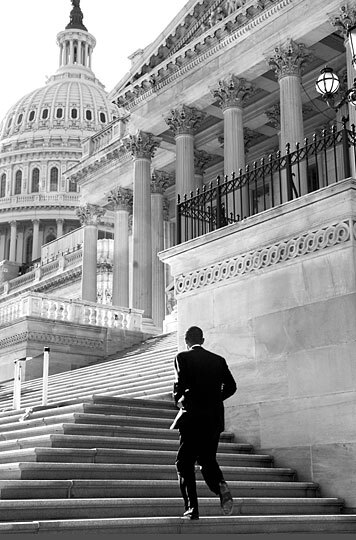 Then-Sen. Barack Obama walks up the steps of the U.S. Capitol on his way to the Senate floor for a vote. 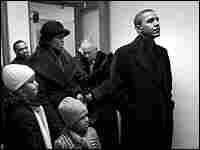 Obama waits backstage at the Old State Capitol in Springfield, Ill., where he announced he was running for president on Feb. 10, 2007. Also pictured are his wife, Michelle, and daughters Malia (left) and Sasha. Pete Souza/Chicago Tribune hide caption 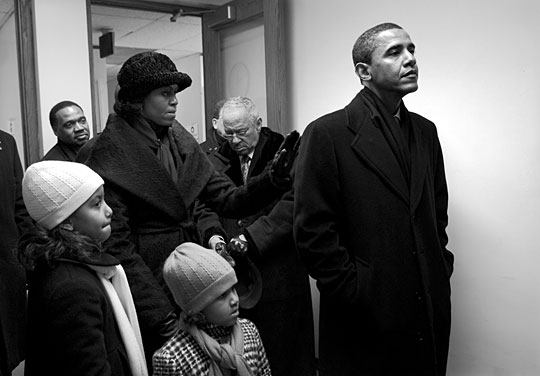 Obama waits backstage at the Old State Capitol in Springfield, Ill., where he announced he was running for president on Feb. 10, 2007. Also pictured are his wife, Michelle, and daughters Malia (left) and Sasha.

It's often said that a picture says a thousand words; sometimes, it can also change the opinions of millions.

Take, for example, a photo of President Bush that appeared during the early days of media coverage of Hurricane Katrina. The photograph shows Bush staring out of a dimly lit cabin aboard Air Force One, looking down on the wreckage of New Orleans.

Bush appears somber and respectful, perhaps even stunned by what he sees. But many interpreted the image as an example of a leader who was out of touch and detached. In the end, the photograph did serious damage to his public image.

According to photographer Pete Souza, circumstances often play a big role in how the public reads and reacts to a presidential photograph.

"People were criticizing him for his slow response to Hurricane Katrina," Souza tells Steve Inskeep. "And if the administration had responded quickly and things hadn't turned out the way they had and that same photograph was taken, then we probably wouldn't be thinking of it in those terms."

Souza recounts a story from a trip to Russia with Reagan. He shot photos of Reagan as the president toured Moscow's Red Square with then-Soviet leader Mikhail Gorbachev. Gorbachev introduced Reagan to various tourists, who asked the American president pointed questions about subjects such as human rights in the United States. Souza says he remembers turning to one of the Secret Service agents standing nearby. "I can't believe these tourists in the Soviet Union are asking these pointed questions." The agent replied, "Oh, these are all KGB families."

Souza also shared that story with Obama in 2005, when the then-senator was visiting Red Square. Souza says Obama loves a good story, and this was a firsthand account of history. Obama has said that he admires Reagan's political success and even agreed with some of his policies.

But Souza doesn't think his Reagan connection was a factor in Obama's decision to tap him for the role of White House photographer. "It had everything to do with the fact that [Obama] trusted me; that I'm not a nuisance; that I can move around in a sensitive meeting and not trip over the furniture," he says.

In working for the Reagan White House, Souza witnessed a lot of history in the making. He traveled extensively with the president and photographed several summits between Reagan and Gorbachev.

The president, of course, is a very popular subject for photojournalists. But the official White House photographer has access to places that press photographers don't, such as the Oval Office and sensitive meetings.

Souza also hopes to photograph events in a way that will set White House photos apart from those of press photographers. He'd like for the images coming out of his office to convey a sense of scene and historical significance. "I think there's only one picture I've ever seen of the Gettysburg Address and, you know, Lincoln, you can barely see him, but it gives you an idea of what that scene was like."

Sometimes, the significance of a particular photo becomes apparent only after the moment has passed. Souza once shot a photo of Obama and his family just before the then-senator from Illinois was to publicly announce his decision to run for president.

In the photograph, Obama looks off into the distance, his face calm and inscrutable; his wife and daughters look on, their expressions hinting at anxiety. Says Souza, "I look at that photograph now and I say to myself, 'He's about to walk out that door, and his life will never be the same.' " 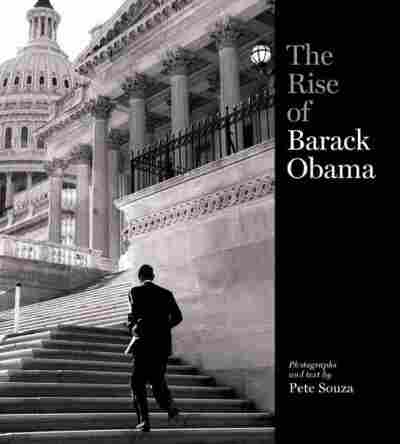 The Rise of Barack Obama