Listen
A 105-Year-Old Witness To History 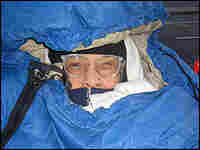 Ella Mae Johnson, bundled in a sleeping bag, insisted on attending the inauguration despite the cold. Joseph Shapiro/NPR hide caption 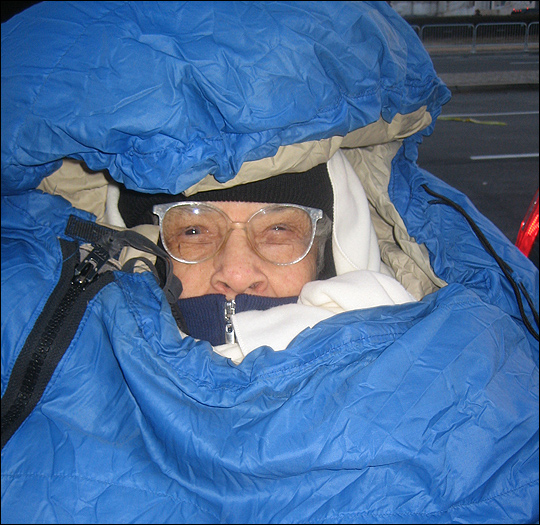 Ella Mae Johnson, bundled in a sleeping bag, insisted on attending the inauguration despite the cold.

A Century Of Change

Read more about Ella Mae Johnson, who has witnessed more than a century of African-American history.

Ella Mae Johnson, a 105-year-old African-American woman from Cleveland, was determined to see the swearing-in of Barack Obama. Even after friends helping her get to Washington suggested the weather would be too cold and she'd have to wait too long outside, Johnson was adamant that she wanted to attend the ceremony for the nation's first black president.

An elegant woman, Johnson dresses with impeccable style and keeps her flowing silver hair just so. But for the inauguration, she sacrificed all that, in good humor, to the greater task of staying warm.

Johnson's nurse, Iris Williams, zipped her up in a bright blue sleeping bag. The puffy fabric covered Johnson from head to toe -- with only her eyes and nose peeking out.

"Once I get you sealed in, there's no turning back now," Williams said with a laugh. "You can't turn left or right, up or down. You're stuck."

At the Capitol, the nurse pushed Johnson in a wheelchair. In her sleeping bag, Johnson got plenty of attention. And when strangers found out how old she was, they stopped to congratulate her.

"Congratulations. Congratulations, Ella Mae. How are you doing in there?" one man said after learning that Johnson recently turned 105.

Johnson has been a witness to more than a century of African-American history. And when Tuesday's historic moment was over, she talked about what it meant to be in the middle of such a friendly crowd.

Johnson spent seven hours outside in the frigid weather. But she said she was too wrapped up -- and too happy -- to feel the cold.