Accessibility links
What's The Big Deal With Inauguration 'Lip-Synching'? The New York Times reported Thursday night that the lovely, contemplative musical preface to President Obama's swearing in was, essentially, a fake: Yo-Yo Ma, Itzhak Perlman, Anthony McGill and Gabriela Montero were not actually playing "Air and Simple Gifts" live. Instead, they were doing the classical-music equivalent of lip-syncing. 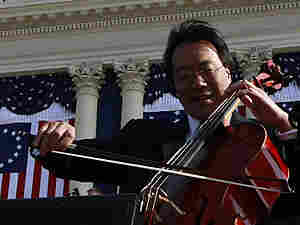 The New York Times reported Thursday night that the lovely, contemplative musical preface to President Obama's swearing in was, essentially, a fake: Yo-Yo Ma, Itzhak Perlman, Anthony McGill and Gabriela Montero were not actually playing "Air and Simple Gifts" live for the million-plus crowd gathered on the mall (plus all the television sets around the globe). Instead, the Times reported, they were doing the classical-music equivalent of lip-syncing.

As Ashlee Simpson discovered during her ill-fated appearance on Saturday Night Live in 2004, the greatest danger of lip-syncing is getting caught in the act. The idea of lip-syncing conjures up, whether deserved or not, the image of an inauthentic artist trying desperately to hide his or her lack of talent, propped up by unnamed songwriters, stylists, producers and engineers, all banding together to create a star. It's easy to snicker at a Potemkin performer taken down a notch.

So what to make of the performance that was piped in and acted out on Tuesday by four immensely talented classical musicians — musicians whose accomplishments and competence are not in question?

The producers of the event (and the musicians themselves) wanted and even needed the moment to be transporting. And they also surely knew that they were set up to fail: The instruments in the quartet weren't designed to be played outside, let alone in freezing temperatures. The musicians wouldn't be able to hear each other well, and the open air offers none of the support of fine concert halls, where the acoustics can help lift a melody and let it soar. So, on this special occasion, they opted for control. (They weren't the only ones with a recording lined up if needed; the U.S. Marine Band also had a backup tape in case temperatures got too low.)

In spite of the technical assist, it's hard to argue with the result of Tuesday's maneuver: It was a transporting moment that moved many with its beauty and calm. In the end, audiences heard the performers' best possible interpretation of the music, which set the stage for the momentous events to follow.

A Musical Dispatch From The Inauguration 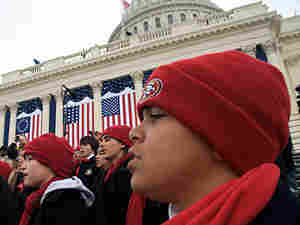 Amid the crowds, the cold and the excitement at Tuesday's historic inauguration, there was also music for celebration and reflection.

Heading To The Mall

Getting onto the Mall was a challenge. We tried the "crossover" at 7th street. We walked to 12th street, another entry point, according to the map. An even bigger crowd was there, pressing in from three directions; a man climbed a street sign to see what was happening and raise some Obama chants from the crowd. We gave up on 12th Street and looped up and around the White House, over to 19th street, walking with a widening river of our fellow citizens, anxious that we wouldn't make it. And then — a miracle — children's voices. An ethereal choir of children singing "America the Beautiful." We walked past the last buildings and the National Mall opened up before us: the Washington Monument, an icy pond with ducks. A pastoral scene punctuated by the red hats of the San Francisco Boys and Girls Choruses on every JumboTron.

Aretha At The Capitol

Everyone had cheered at the sight of Michelle Obama in her sparkly golden dress. "Goodbye to J. Crew," my friend said with a laugh. Everyone had roared at the sight of Barack Obama on the JumboTron, as he made his way onto the steps and to his seat. Now it was Aretha Franklin's turn to inspire the crowd. She did it with her hat, and with her rendition of "My Country 'Tis of Thee" as only the Queen of Soul could deliver it. I only wish she'd gotten all of us, the million-plus crowd, to sing it with her. That would have been a true moment of unity.

Before Barack Obama stepped up to take his oath above the crowd of chilled but cheerful well-wishers stretching all the way back to the steps of the Lincoln Memorial, there was another moment for music. Simple music, played by four musicians representing the diversity and accomplishment of American culture: an Israeli-American, another born of Chinese parents, an African-American raised on the south side of Chicago and a recent transplant from Venezuela. These representatives of Obama's vision of a culture blind to color and creed joined together for an arrangement of one of America's most abiding tunes: the Shaker melody "Simple Gifts." The lyric, written in 1848 by an Elder in the Shaker Community in Alfred, Maine, begins: " 'Tis a gift to be simple / 'Tis a gift to be free."

Yo-Yo Ma's cello, Itzhak Perlman's violin, Anthony McGill's clarinet and Gabriela Montero's piano each held the melody and then layered it, twisting and curling out over the suddenly calming crowd. A man behind us remarked that a flock of birds seemed to be soaring along with the music. For a moment, everyone looked up.