Accessibility links
Abraham Lincoln: A Portrait In Music And Words At the height of WWII, Aaron Copland used excerpts from Lincoln's speeches, combined with musical quotations from American songs, to create one of the most enduring works in American music. In honor of Lincoln's 200th birthday Thursday, hear the U.S. Marine Band perform Lincoln Portrait in concert. 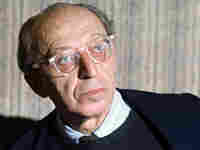 Aaron Copland said his inspiration for Lincoln Portrait came, in part, when he stumbled across a paperback biography of the president in a train station. Getty Images hide caption 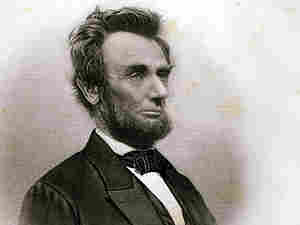 One of Aaron Copland's most beloved and widely performed works, Lincoln Portrait served as the composer's tribute to America's 16th president, Abraham Lincoln. On the occasion of Lincoln's 200th birthday, it's worth revisiting.

In 1942, conductor Andre Kostelanetz commissioned Copland to write something appropriate for Americans shortly after the beginning of the country's involvement in WWII. The composer called this an almost impossible task, but he eventually settled on the idea of a "portrait" of a great American in which the subject spoke in his own words.

"The letters and speeches of Lincoln supplied the text," Copland said in 1943. "It was comparatively a simple matter to choose a few excerpts that seemed particularly apposite to our own situation today. I avoided the temptation to use only well-known passages, permitting myself the luxury of quoting only once from a world-famous speech."

Some of the lines Copland chose from Lincoln's speeches resonate today: "The dogmas of the quiet past are inadequate to the stormy present. The occasion is piled high with difficulty and we must rise with the occasion. As our case is new, so we must think anew and act anew."

When Copland wrote the music for Lincoln Portrait, he quoted from a couple of popular songs from Lincoln's Day: "Camptown Races" and a ballad known as "Springfield Mountain."

Though it's quintessentially American, Copland's Lincoln Portrait has also been performed in French, Spanish, German and other languages. Its spirit transcends national boundaries.

I was lucky enough, and honored, to be able to narrate a performance of the Lincoln Portrait a few years ago at the University of Maryland, with some very appropriate musicians — "The President's Own," the U.S. Marine Band. The conductor was Col. Timothy Foley.