Accessibility links
'The Music Teacher' Separates Musicians, Teachers Television writer and musician Barbara Hall got the idea for her latest novel after taking violin lessons from a music teacher who seemed angry that she wanted to learn. Hall discusses her book, The Music Teacher and the idea that not everyone is called to be a professional musician; some are called to teach.

Television writer and musician Barbara Hall got the idea for her latest novel after taking violin lessons from a music teacher who seemed angry that she wanted to learn. Hall discusses her book, The Music Teacher and the idea that not everyone is called to be a professional musician; some are called to teach.

You might not know Barbara Hall's name, but there's a good chance you've seen her work: "Judging Amy," a network TV series about a female family-court judge starring Amy Brennemen; "Joan of Arcadia," another series, about a girl who keeps running into God in various incarnations.

Barbara Hall created those characters. She was exec. producer of those series, and she also moonlights as a novelist and musician. She brings both those passions together in her new book about an unfulfilled music teacher, and it's called "The Music Teacher."

Barbara Hall is with us now from the studios of NPR West. Welcome.

LYDEN: Would you introduce us to the protagonist of the book, your music teacher, Pearl Swain? She has a certain bitter charm. Maybe you just read us into the book?

Ms. HALL: Okay. She says: I am the mean music teacher. I am that cranky woman you remember from your youth, the one whose face you dreaded seeing, whose breath you dreaded smelling as I leaned over you, tugging at your fingers.

LYDEN: You say that music teachers are mean because, in your words, they don't want to teach, they want to be musicians. And they want an audience for their own music, not a succession of surly children being forced to memorize folk tunes and watered-down pop. So where does your portrait of a music teacher come from?

Ms. HALL: Well, I've had a lot of experience with music teachers. I started learning, when I was 15, on the guitar, and I started trying to learn violin as an adult, just a few years ago. And I noticed that my teacher was angry about the fact that I wanted to learn, and I became fascinated by that character and what motivated her to try to actually discourage learning. And I came up with the idea that the teachers who don't want to teach you are the ones who really meant to be musicians and somehow got lost in the profession of teaching, as opposed to the ones who actually answered a call to teach.

LYDEN: Because elsewhere, you say that the trick, or the secret, is that the good teacher embraces being taught by the student, or at least learning something from each student.

Ms. HALL: Yeah. I think that a good teacher realizes that your student is there to teach you, too. And it's the realization that Pearl comes to, which is that she thought she had one calling, but she has another.

LYDEN: She works in a music store in West Los Angeles. All the other people working at the store are male musicians. And everybody's sort of disgruntled in their own way, but they have some fun conversations about music.

Ms. HALL: One of the reasons I wanted to write the book is, I was in this alternative country rock band called the Enablers, and we played around town, and we had a lot of rehearsals. And we would get into these discussions late at night that were so sort of fun and frivolous but they could turn serious at any minute that mainly, what they were was just a matter of submerging ourselves into this world and language that musicians have, caring to a ridiculous degree about things like what note the traditional dial tone is in.

And I had a friend who took a tuner into the shower to prove that it hummed in the key of E. I found that world sort of interesting, and I wanted to open it up and invite people into it.

LYDEN: The key relationship in this book is between Pearl and her student, Hallie. It's a very intense relationship. Could you tell me a little bit more about it, please?

Ms. HALL: Well, I wanted to talk about a person who has become so isolated from life because of her passion, which is music, that she really has lost the ability to connect with people.

She teaches, but she doesn't get involved with her students. And then she meets a student who has perfect pitch, a natural ear, a complete understanding of the instrument, and she sees what she can do with the student, which is she can make her great, and she makes a decision to invest in her. And once she does that, it opens her up to the possibilities of investing in all kinds of relationships.

Ms. HALL: Yes. Well, she has become a teacher. I think in the beginning, she wasn't one. And then, through her journey, she realizes that she is one, and she embraces that calling and lets go of the idea that she was ever meant to be a musician.

LYDEN: Well Barbara, it's been a great pleasure talking to you.

LYDEN: Novelist, TV writer and musician Barbara Hall. She joined us from NPR West, and her new novel is called "The Music Teacher." 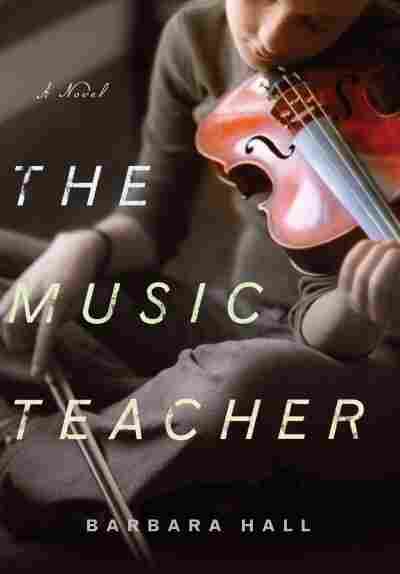