Accessibility links
Keeping China's Ancient Music Alive Only a dozen orchestras in northwest China are devoted to performing music from the seventh-century Tang Dynasty. Predating European Gregorian chants, it's among the oldest notated music in the world. 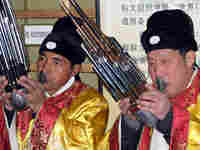 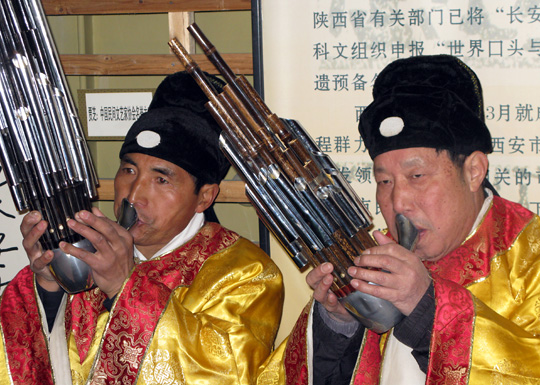 For many years, music scholars in China and Japan tried unsuccessfully to decipher ancient musical notations that looked a bit like Chinese characters. They found the key to the puzzle in the city of Xi'an in northwest China, where the music is still performed by a dwindling number of orchestras. The notation was used by court musicians of the Tang Dynasty as far back as the seventh century, predating Europe's Gregorian chants, which are commonly described as the earliest written music.

In the seventh century, Xi'an was known as Chang'an. It was the capital of the Tang Empire and the world's largest city, with roughly 1 million residents. Chang'an lay at the eastern end of the Silk Road, and scholars, priests and merchants from India, Japan, Persia and Byzantium created a thriving trade there in goods and ideas.

Li Kai, who leads a Tang Dynasty music ensemble in Xi'an, says that the music of the Tang court absorbed cultural influences from the West.

A valuable flower once came overland from Europe via the Silk Road. China's emperor saw this as an event worth commemorating, and so he had his court musicians compose a tune called 'The Tulip.'

"A valuable flower once came overland from Europe via the Silk Road. It was called the tulip," Li says. "China's emperor saw this as an event worth commemorating, and so he had his court musicians compose a tune called The Tulip."

Every Monday, Li's orchestra rehearses at the Little Wild Goose Pagoda, built in the year 709. Xi'an had 40 orchestras playing Tang court music in 1950. Today, there are 12.

Hui Zhi is the woman who bangs the little gongs. Her day job is as a police officer at a local jail. She says she was walking by the Little Wild Goose Pagoda one day when she heard the music. 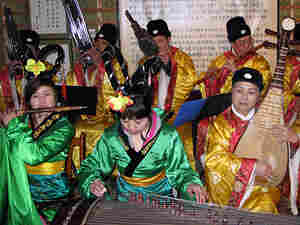 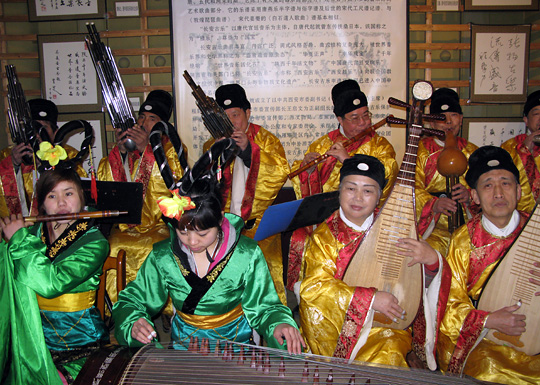 "The music rocked my mind," Hui says. "When I heard it, I imagined the prosperity and power of the Tang Dynasty. I sat and listened for a while. And then I made up my mind to join this orchestra."

Wu Qing, 19, sings: "The incense is in its burner, the candle is on the table." It's an ancient song describing offerings at a Buddhist temple.

Wu is a far cry from the courtly, portly female musicians in Tang Dynasty paintings. Dressed in a neon pink sweatshirt and camouflage cargo pants, she bops to music and plays on a handheld video-game device during breaks in the rehearsal.

'Sound Of The Drunken Dragon'

"I wonder why I wasn't born in ancient times," Wu says. "Really, really, really! Ancient people were so lucky; they didn't have any troubles. They just ate, drank, listened to music and that's all."

Actually, commoners seldom got to hear court music, except on major holidays. Most of the time, it was the exclusive province of the emperor and his court. Besides, they wrote music in a way that was illegible to all but a few. Think of it as a kind of ancient anti-piracy encryption.

Playing Without The Notes

He Zhongxin comes from a family with centuries of musical tradition. He says that the script could tell a musician what to play, but not how to play it.

"Our kind of music uses parts of Chinese characters, but no notes," He says. "Even if you can understand it, you won't get the flavor of the music right without the oral instruction of a teacher."

In other words, it's the teacher who gives you the Tang Dynasty equivalent of allegro con brio, or adagio molto cantabile.

Li admits that some data must have been lost over centuries of oral transmission.

"How far off are we from Tang Dynasty music? I'm sure there's some distance, but not much," Li says. "After a thousand years, there's got to be some difference. Tang Dynasty people ate differently, thought differently and lived in a different environment." 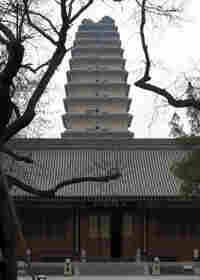 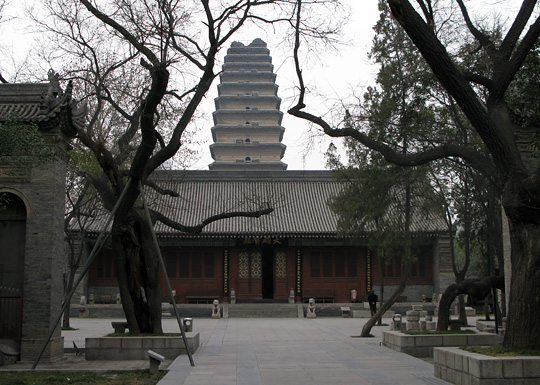 The Little Wild Goose Pagoda in Xi'an, China, where the ensembles perform.

Li says that the Tang Dynasty adhered to the Confucian idea that music's highest function was as a tool of moral education and socialization. It taught people to respect authority and hierarchy, and to cultivate a spirit of composure and moderation.

That means that everyone in the orchestra played the same note at the same time.

"Music emphasized harmony," Li says. "The myriad sounds were united as one. This united sound was used to promote the emperor's authority. So while each person played a different instrument and had a different role in society, they all acted according to the same standards and rules."

This interpretation of harmony meant strength through unity, not diversity. The idea of harmony as a combination of different chords and notes was a foreign notion.

Today, China's rulers once again espouse a "harmonious society." Of course, not everyone buys into this orthodoxy, even at the risk of being branded a dissonant dissident.