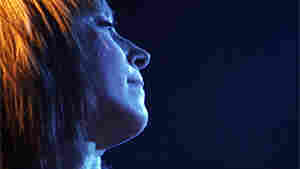 The Heartless Bastards' success rests largely on the talents of lead vocalist, guitarist and songwriter Erika Wennerstrom, who's long been a standout purveyor of raw garage rock. Her husky, powerhouse delivery defines the sound of the group, though lately, her ambition has also made for a poignant storyline. Wennerstrom recently secluded herself in a small Austin, Texas, apartment for six months in order to write new songs, reemerging with a new band lineup and, eventually, a new album.

The new incarnation of The Heartless Bastards kicks off NPR Music's nighttime South By Southwest showcase, as the band performs material from its new record, The Mountain. Listeners can hear the whole evening concert broadcast live from Stubb's Bar-B-Q in Austin, Texas, and archived online afterward, starting at 11 p.m. ET on Wed., March 18. (Also on the bill will be The Avett Brothers and headliner The Decemberists.)

On The Mountain, the third album under the Heartless Bastards moniker, Wennerstrom's throaty vocals are as dominant as ever, backed by powerful rock riffs and quieter acoustic flourishes. It's a subtle departure from the band's brighter, bluesy sophomore album, All This Time; in fact, it also chronicles Wennerstrom's breakup with her boyfriend of 11 years, a former bassist in The Heartless Bastards.

Wennerstrom now leads a new live band, which includes bassist Jesse Ebaugh and drummer Dave Colvin, who played on the group's original demo tapes. It will be the first time The Heartless Bastards' members have played SXSW as something of a local act — Wennerstrom has since relocated permanently from Dayton, Ohio, to Austin.