Accessibility links
Stubb Stubblefield: Archangel Of Barbecue C.B. "Stubb" Stubblefield had a mission to feed the world, especially those who sang in it. He generously fed and supported both black and white musicians, creating community and breaking barriers. 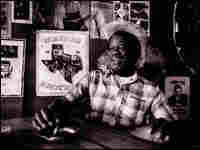 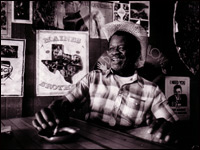 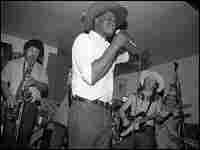 Stubb's Bar-B-Que joint and roadhouse in Lubbock was a gathering spot for an emerging Texas music scene in the 1970s. Courtesy of Stubb's hide caption

Stubb's Bar-B-Que joint and roadhouse in Lubbock was a gathering spot for an emerging Texas music scene in the 1970s. 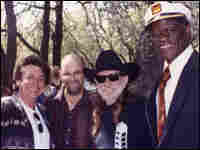 Stubb's is still a big part of the four-day music festival that takes place every year in Austin. NPR Music presented a concert there Wednesday night with The Decemberists, The Avett Brothers and The Heartless Bastards. You can hear the shows by clicking here.

"I'll never forget when Linda Ronstadt came," Ely's wife, Sharon, recalls. "She went into Stubb's kitchen in her little white ballerina slippers and walked through the most barbecue sauce-encrusted floor I've ever seen."

Stubblefield, born poor and hungry, had a kitchen calling. He wanted to feed the world — especially the people who sang in it. He had been an Army cook in the last all-black regiment of the Korean War. Back home in Lubbock, he generously fed and supported both black and white musicians, creating community and breaking barriers.

Lubbock was very segregated back then, recalls singer/guitarist Gilmore. "One day [blues guitarist] Jesse [Taylor] was hitchhiking, and this big huge black man stopped and picked him up. It was Stubb. C.B. Stubblefield. He had a barbecue joint, a tiny little dive, and Jesse started hanging out with Stubb. ... At some point, Jesse said, 'Stubb, could I bring a few of my friends and play?' It was unusual for a white kid and a black man to become close friends."

"The place was about barbecue and music," says country music singer and songwriter Hall. "You knew if you wanted to hang out with your kind of people, you could go out to Stubb's and see a bunch of pickers out there. It was like camels to a watering hole. And he loved musicians. He was kind of an archangel."

And no money, Ely adds. "Everybody tried to help him, and eventually we got him to make some barbecue sauce in the kitchen, and then we'd take it out and sell it for him."

"We had an organization we called the IRS: Idiots Rescuing Stubb," Hall says. "Once in a while Stubb would go out of business, and we'd all get together and raise some money and put him back in business."

According to Hall, Willie Nelson and Waylon Jennings were members of the club.

In 1985, Stubblefield moved to Austin and opened Stubb's, a legendary club with a legendary sauce, that still opens its doors to new talent pouring into town each year for the South by Southwest music conference.

When we produced the Hidden Kitchens Texas radio special, we recorded music for the hourlong program in Austin at KUT studios with Gilmore, steel guitar player Cindy Cashdollar and bass player Tom Corwin. During the recording session, Ely came by. Gilmore and the Elys are longtime friends from Lubbock. When we started talking about Hidden Kitchens Texas, the conversation quickly turned to Stubb.

"Stubb had this deep, beautiful voice," Gilmore says. "He just exuded love. He'd get up and say, 'Ladies and gentlemen, my name is Stubb, and I'm a cook.'"

"I never had any Stubb's barbecue," Hall says. "Stubb and I were great friends. I loved him like a brother. But I never told him — I was a vegetarian."

Produced by The Kitchen Sisters, Davia Nelson and Nikki Silva, with Laura Folger and Nathan Dalton. Mixed by Jim McKee.

Smoking a whole beef brisket requires deep commitment — literally. Plan on 1 1/2 hours per pound of brisket. This means at least 15 hours for a "small" 10-pound brisket, and 24 hours for a 16-pounder! But once the meat's on the grill, the hard labor's done. Just tend to the temperature, the smoke and, if desired, give it an occasional mop.

Makes about 1 1/2 cups; enough for a large brisket or three slabs of ribs

In a small bowl, combine the pepper, Spice Rub, granulated garlic, onion powder, and seasoning salt and set aside

Rinse the brisket and pat dry with paper towels. Generously coat the brisket with the spice rub mixture on all sides. Brush with mopping sauce (if using). Let it come to room temperature while the grill fires up.

Set the brisket over indirect heat and cook about 1½ hours per pound. To ensure even cooking, set an oven thermometer next to the brisket, also over indirect heat. Every hour, check it and add more fuel and wood as needed to maintain a smoky 225-degree heat. Cook, mopping every 2 to 3 hours (stop mopping one to two hours before you think the brisket will be done), until the internal temperature reaches 185 degrees. Let the brisket rest 15 to 45 minutes. Slice the meat against the grain and serve plain or with barbecue sauce on the side.

2 to 3 teaspoons salt, or to taste

Pick through the beans to discard any pebbles or other debris. Rinse the beans well. Soak in plenty of water to cover for at least four hours or overnight. Drain the beans and set aside.

In a heavy pot, fry the bacon over medium-high heat until it browns, about 10 minutes. Stir in the onion, celery, bell peppers, and garlic and cook, stirring occasionally, until the vegetables soften but still have some crispness, about 5 minutes. Scoop out half the mixture and set aside (refrigerate if you're not planning to serve the beans as soon as they're cooked.)

Add the beans to the remaining vegetables in the pot and enough water to cover by 1 inch (6 to 8 cups). Bring to a boil over high heat, then reduce the heat so the beans slowly simmer. Do not cover the pot. Start testing after 20 minutes, though they may take as long as one hour. When the beans start to feel soft, stir in the salt and pepper. Stir the beans occasionally as they cook; they're done when just tender, but not much. (Note: For a thick bean broth, puree 1/2 to 1 cup of the beans and return them to the pot.)

Ladle the beans, with some of their liquid, into bowls or cups. Spoon on some of the reserved bacon mixture (reheat if necessary in skillet or microwave). For extra flavor, drizzle with olive oil and a splash of vinegar to taste.