Accessibility links
Movie Review - 'Monsters Vs. Aliens': When 3-D Attacks A meteor transforms a valley girl into a giantess — and kick-starts her career as a world-saving monster once aliens invade. 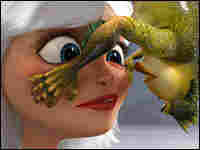 Turned Upside Down: New bride Susan (voiced by Reese Witherspoon) finds herself face-to-face with scaly creatures after she grows out of control.

Motley Crew: Susan's new friends, including a blue blob named B.O.B. (voiced by Seth Rogen), are a bit rough around the edges.

DreamWorks Animation — the outfit behind Shrek and Kung Fu Panda — says that from now on, all of its animated films will be released in 3-D, and in the first few moments of Monsters vs. Aliens, that future seems like it might be fun. Asteroids whiz past your head before you've quite got your 3-D glasses settled on your nose, and a few seconds later, a character bounces a paddle ball in your face.

At this point, the filmmakers figure they've established that their gimmick works and are ready to roll out a little plot. A plot resurrected from 1950s sci-fi, actually — a radioactive meteorite lands just a little too close to a wedding, and when the groom tells the bride (voiced by Reese Witherspoon) that she's "glowing," he means it literally.

And she's not just glowing, she's also growing. Really big. Like Attack of the 50-Foot-Woman big.

When the government spirits her away to its secret monster warehouse, she discovers she's not the only '50s-feature creature they've locked up. There's a half-ape-half-fish missing link, a mad scientist with the head of a cockroach, and a friendly but empty-headed blue blob (voiced, perhaps inevitably, by Seth Rogen).

No, literally empty-headed: "Turns out you don't need a brain," he announces.

True enough, at least for this movie. It's designed, as these things often are, to work on several levels — there's slapstick for the kiddies, pop-culture references for their parents and '50s sci-fi campiness for granny and gramps, who'll be old enough to recognize a good Godzilla or Mothra joke should it crop up.

With all that going on — not to mention a five-eyed squid who wants to rule the world, Stephen Colbert as president, and a 3-D battle that flattens the Golden Gate bridge — you'd think Monsters vs. Aliens would be plenty engaging.

Instead, it's mostly an excuse to hop from one depth-perception exercise to the next. And once you've seen a couple, they're not really reason enough to keep watching.

It would be oversimplifying to say that where Pixar builds films like Wall-E around emotional stories, DreamWorks builds its pictures around gimmicks. (Though what else could you call the Jerry Seinfeld shtick in Bee Movie or the martial-arts shtick in Kung-Fu Panda?)

Here, directors Rob Letterman and Conrad Vernon push so hard for three-dimensionality — and they're so reliant on it — that they basically have their animators putting sightlines before storylines; they set up practically every scene so that something in it can be sent careening at your head.

After a while, you can see the setups happening — and once you do, the careening gets predictable. Which gets old, really fast.