Accessibility links
Herring School For Safer Sex Hidden below the deep, dark ocean, millions of herring come together in a nightly ritual migration in order to mate. 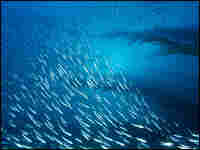 A new study shows that herring, like these, group together in a nightly ritual where they travel en mass to mate. Ralph A. Clevenger/Corbis hide caption 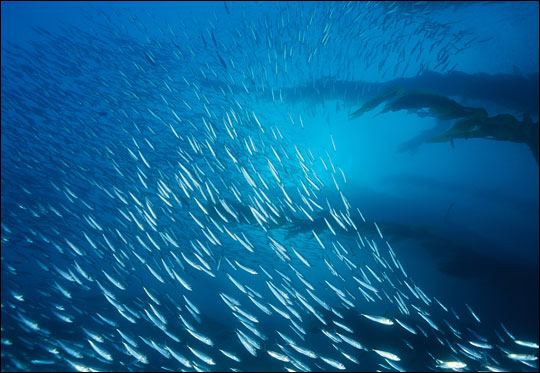 A new study shows that herring, like these, group together in a nightly ritual where they travel en mass to mate.

Plagues And Invasions: Critters Who Swarm

Locusts: Check out this video of a family in the Congo whose car was surrounded by locusts.

Herring: No wonder they travel in packs! Herring have lots of predators, including eagles, dolphins and humans. View the underwater mass in this feeding frenzy video.

It happens within minutes: Small groups of fish cluster and coalesce, forming groups as large as a half-billion. The swarm behaves as one, navigating the dangerous ocean en masse to get to the mating site.

Scientists have discovered an underwater phenomenon on a scale they've never seen before: a half-billion herrings suddenly schooling together in the North Atlantic's Georges Bank.

For a week, a scientific team aboard research vessels used a new kind of sonar device to watch this gigantic school form every evening.

"Below the surface, things were going on that nobody knew about, and it's because we just couldn't see it," says Nicholas Makris, the MIT engineer who built the new device. "With this new technology, we're essentially taking the darkness out of the ocean."

Makris described the nightly gathering as "city-states of fish."

Although many animals, such as birds or locusts, gather into flocks and swarms, Makris says this is the first time an entire "chain reaction" that leads to swarming has been observed start to finish over such a large area.

The process starts as fish begin to aggregate near the seabed at sunset. When the fish reach a critical density — about one fish in a 15-foot-square area — their behavior changes. They draw closer to each other into "clusters," Makris says, and align their movements. Then the clusters coalesce in what appears to be a wave passing through the mass of fish. Makris says it looks like the kind of wave people create in sports stadiums.

"Somebody stands up," he says, "then somebody next to them stands up, and then the next and the next, and before you know it you have a wave propagating from one end of the arena to the other."

Once the giant school forms, it then moves south as a single entity, to an area where the fish spawn.

Princeton biologist Iain Couzin, who studies swarming animals, says, "It's important that they synchronize their behavior to mate at the same time, to move together into particularly dangerous parts of the oceans." The bigger the mass of fish, the less risk each fish has of getting eaten.

After the herrings mate, they return to where they started and disperse, and then do it all over again the next night.

The Georges Bank herring school at times stretched for 25 miles, and what enabled scientist to see the entire gathering is a remote sensing device called Ocean Acoustic Waveguide Remote Sensing. It has a much wider view of the ocean and seafloor than conventional sonar.

The research was conducted in 2006 as part of the Census of Marine Life, a 10-year-long project due to finish next year. The herring discovery is described in the current issue of the journal Science.

Within Minutes, Millions Of Herring Congregated In The Ocean Off Georges Bank. See Underwater Imaging Researchers Used To Analyze The Group Dynamics.