Accessibility links
BLK JKS: Rock After Apartheid The brooding dub-rock of South Africa's BLK JKS (pronounced Black Jacks) is a formidable addition to the musical landscape of indie-rock, with potential to appeal to the audiences enchanted by the likes of Vampire Weekend and TV on the Radio. PRI's Marco Werman interviews the band about their "post-apartheid" music.

Connie Dover, 'I Am Going To The West'

Connie Dover, 'I Am Going To The West' 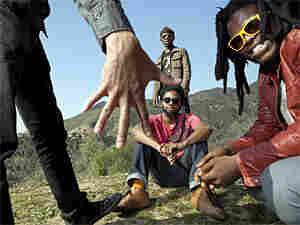 With only one EP out (and a full-length album on the way), BLK JKS has won acclaim from around the music blogosphere. Demonica Orozco hide caption

For many years, the sound of South African music was intertwined with the fight against apartheid.

We were used to hearing toi-toi — the angry but joyous chanting that was the soundtrack to spontaneous demonstrations in places like Soweto. Well, times have changed.

To wit: BLK JKS (pronounced Black Jacks), a four-man rock band from Johannesburg. Their brooding dub-rock marries psychedelic rock and heavy metal with everything from South African rhythms to reggae. But the members of the band say that they aren't trying to project any particular image.

"We have some songs, and we'd like to play them," says guitarist Mpumi Mcata. "And we'd like people to hear the songs and perceive that above anything — just hear the music."

"Politics is a big thing, you know?" Mcata says. "People love their politics there, and we don't reject it, you know. But we also as artists need to step out of making — not many movies, for example, come out of South Africa, and the big ones are always about crime, or AIDS, or politics. Why can't people just express themselves, express art, express other areas of being, you know?"

Click the link at the top of the page to hear the full interview with BLK JKS.